Tally-Ho: The Hunt Continues with the Jack Russell Terrier

As California readies itself to eradicate invasive swamp rats, or nutria, Jack Russell terrier owners know that part of the solution lies in the fierce compact ratters at their feet. Why spend $7 million in addition to the $8.5 million already granted for nutria control when plenty of owners would love the chance to “hunt” their Jack Russells, an activity in which essentially the dog is the bullet the terrierman fires into a varmint’s den. Western owners successfully campaigned to get the orange-toothed rodent added to the Jack Russell’s official quarry list just as the population began to explode. But whether the quarry is native or non-native, the Jack Russell terrier is driven to hunt it down or drive it from ground. 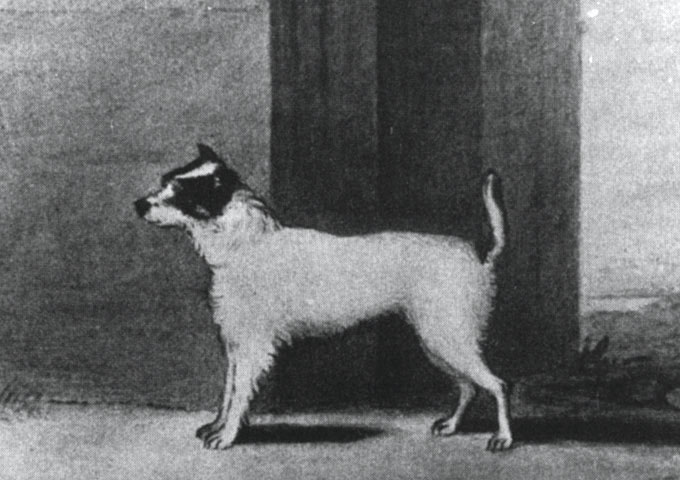 The story goes that when Parson John “Jack” Russell of Swimbridge, Devon in England saw a nearby milkman’s dog—a small white terrier with tan spots on her eyes, ears and tail—he bought her on the spot. Trump would become Jack Russell’s foundation bitch, the mother of all Jack Russell terriers to come. Jack Russell (1795-1883) was the vicar of Swimbridge, but he was also a devoted sportsman who loved fox hunting, and where the hounds could not go, Trump was built to pick up the chase.

In Parson Russell’s day, the “terrierman” would ride with the fox hunt, terrier in tow in a satchel slung across his chest. Whenever the fox went to ground, the terrierman was called up and he placed the terrier at the sette opening. The terrier is built and bred to tunnel. Its powerful legs are capable of moving significant amounts of earth. Its forequarters should be able to stretch out so that the animal can lay on its side to move dirt, low crawl, twist, turn back on itself, whatever is required to maneuver through and around roots and rocks underground in pursuit of quarry. In the early days, the terrier was expected to bay and thus bolt the fox so the hunt could continue, the terrierman collecting his charge and rejoining the hunt. It was a flaw if the terrier engaged the quarry, and a dog that did so was referred to as “hard.” 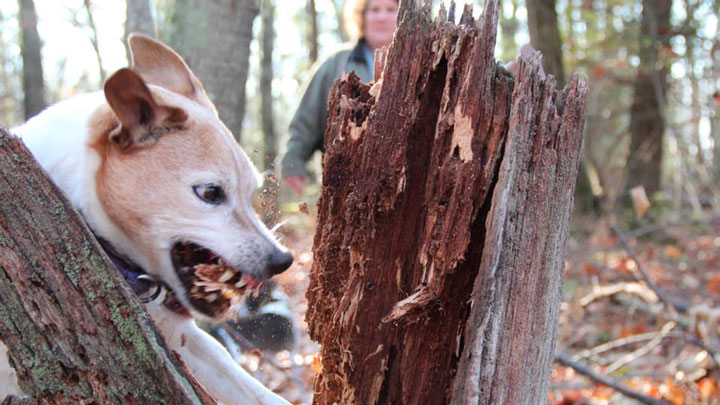 It's never just a walk to a Jack Russell. This one stopped to hunt a chipmunk in a tree stump. Jacks often do not mellow with age. Jamie was 14 when this picture was taken. (Image courtesy of Kathleen Steffens.)

However, savvy dog owners weren’t about to let that characteristic go to waste, so some Jack Russells were employed on ships to kill rats. Although they could clear out a hold in no time, often they simply shook and stunned their quarry and moved on to the next, attempting to kill as many as possible as quickly as possible. Today you might see this play out on a cranberry bog or near a pond during the spring peeper explosion. In addition, the Jack Russell variant on the fox terrier was and continues to be well utilized on farms to control vermin.

Parson John "Jack" Russell was as colorful a character as his white-bodied terrier type.

The parson was a founding member of The Kennel Club in England, but he never showed his own “fox terriers,” saying it was like comparing wildflowers to cultivated flowers. That sentiment is alive and well in the Jack Russell Terrier Clubs of Great Britain, America and Canada and elsewhere. These are not “all-breed” registries. In fact, membership in an all-breed registry, such as the American Kennel Club, is not allowed. This is because the working characteristics of the Jack Russell are emphasized over a standard look for the show ring. In fact, the Jack Russell is not a breed in the strictest sense of the word, but a type—wild and not cultivated. The cultivated equivalent is today’s fox terrier, which couldn’t get into a fox hole if its life depended upon it. In light of that, the standard for the Jack Russell can be smaller like a fox in southern England or larger like a fox in northern England, but in either case, its chest must be spannable by an average pair of adult human hands.

Unfortunately, anti-hunting extremists essentially killed the fox hunt on both sides of the Atlantic. If anything, hunting with today’s Jack Russell terrier, at least in North America, is an even fiercer battle. Owners will “hunt” their dogs by taking them afield, often at the request of and certainly with the permission of farmers and property owners who require varmint control.

In every way possible, single-breed Jack Russell terrier clubs ensure that working dogs are given the highest honors. Natural Hunting Certificates Below Ground are awarded by a judge in the field who witnesses the Jack “working” a red fox, gray fox, badger, raccoon, groundhog or opossum with nutria being a worthy quarry in the West. A Bronze Medallion for Special Merit in the Field is awarded to those hunter-terrier partners who “work” three different quarry. The most prestigious award available is the Working Achievement Award for Continued Field Service. The terrier must earn six certificates over multiple years with at least one of those being earned after the dog has reached 6 years of age. 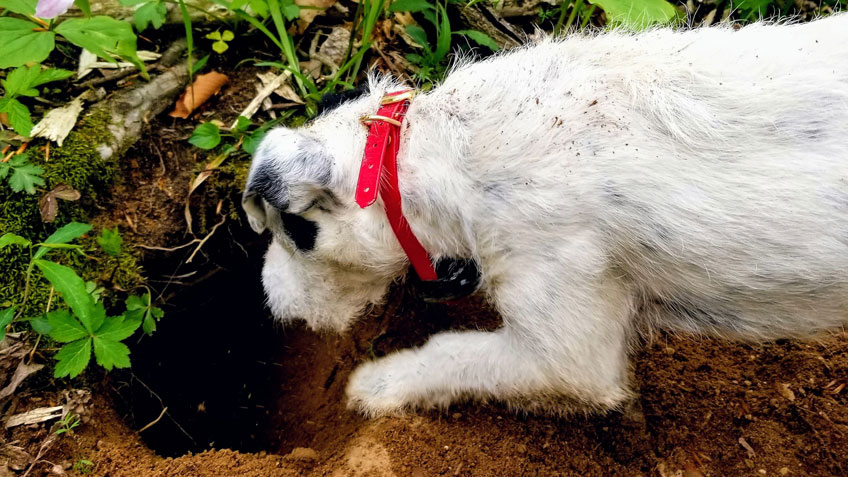 Owners must equip their terriers with long-range locator collars to track their underground whereabouts, most notably in depth. True to its original breeding, if the terrier finds someone home, they are to stay put and “mark.” Although marking may officially include whining, scratching and chortling, it’s no secret that those who breed for hunting favor an ear-piercingly loud terrier that is capable of being heard through perhaps as much as 40 feet of earth. 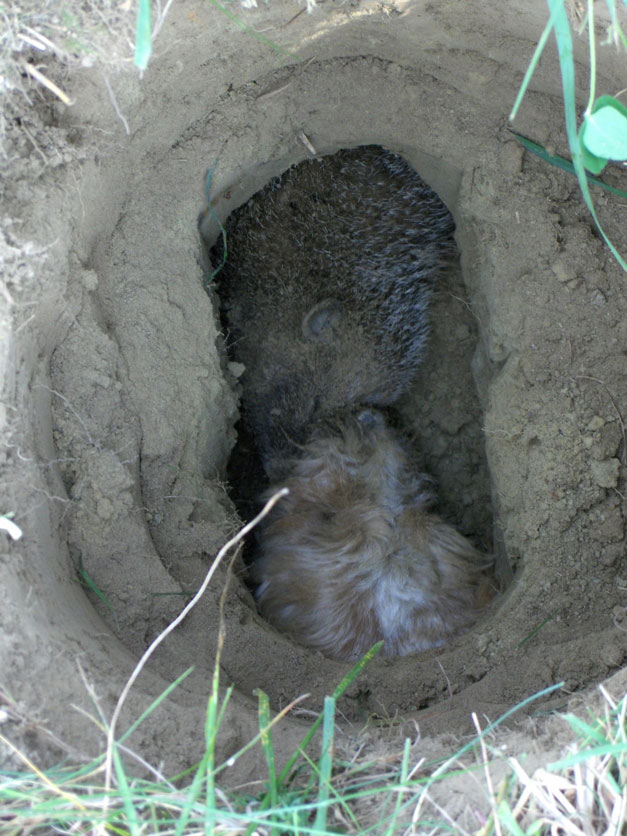 On a hot and rainy day afield, Live Wire Beetle Bailey, owned by Pat Marchetti and Joanne Guilmain, made short work of this groundhog. (Image by Susan Riley.)

Once the terrier has cornered its quarry, the terrierman literally digs down to the terrier and hopefully is able to put a shovel in the tunnel between his or her dog and the quarry, dispatching the latter for the farmer or landowner if requested and in accordance with all hunting regulations. (In fact, club ethics dictate that terriermen and women not hunt if young may still be present in the den, even if legal to do so.) The terrier is lifted out of the hole, given water, praise, first aid if required and undoubtedly lots of love.

One must be as fearless as one’s dog to put them in a hole. These dogs are bred to hunt underground, independent of their owners—thus their alert, curious and driven nature. In fact, it is a flaw for Jack Russells to exhibit shyness once they are beyond any normally occurring fear stages during puppyhood. You must have a “leave it” command and a solid recall to hunt with your Jack, but whether verbal commands can even reach them when they’re working or whether they ignore them is open for debate. A whistle recall is extremely handy. 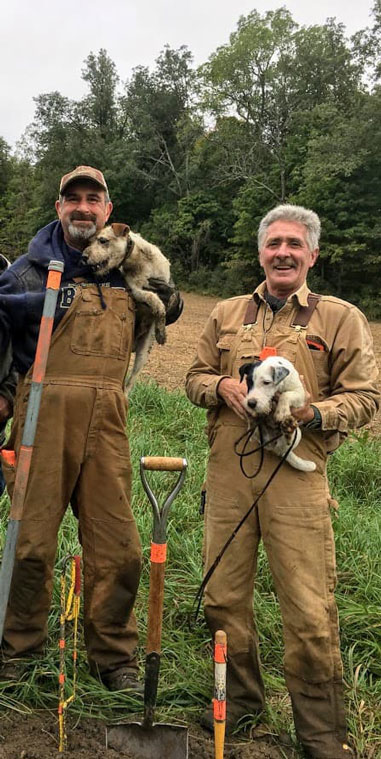 Ted Ely (with Ruby), right, prepares the "Well Grounded" section of the Jack Russell Terrier Club of America's quarterly magazine, "True Grit." He has been highly instrumental in passing along his knowledge and expertise to other Jack Russell owners who want to try hunting their terriers.

A hunter will never put their dog in a hole if there is any evidence of skunk, be it spray, scat or footprints. Trapped underground, a sprayed Jack may not survive. Time is of the essence in those instances. Someone would need to notify the nearest veterinarian and demand that an IV and dose of acetylcysteine (Mucomyst, Fluimucil, Mucolator or Tixair) be at the ready upon arrival. In the case of a badger, if the dog engages, the outcome is also not certain.

Needless to say, these dogs will carry the scars of their fieldcraft with them. In the show ring, they cannot be penalized for cuts or nicked ears, and those that embody proven working ability with well-balanced conformation will be awarded top prizes.

Not every Jack owner or every Jack is cut out for hunting, so these clubs host trials that are the equivalent of Jack Russell Disney World, complete with racing, simulated hunting in go-to-ground tunnels, barn hunts, lure coursing, agility and other extras like ball toss or high jump.

Like its original owner, the Jack Russell is no wallflower and neither are its owners, who are often as feisty as their dogs. The parson liked to gamble and ended up spending down his wife’s substantial fortune, but those days on the Colleton estate were filled with socializing, fundraising and Freemason activities. In other words, the parson lived a full and often chaotic life. His dogs are no different, often requiring saving from themselves. They open the door for their owners to forge lifelong friendships within the community, which often extends to helping each other during life’s challenges.

Simulated Go-To-Ground Competitions
This video is just one of many examples of the thunder tunnels that are built to test a Jack Russell's ability to maneuver underground.


Despite an explosion in pet-oriented ownership during the 1990s and the peak of Eddie’s popularity on the TV show “Fraser” and countless ads featuring the ever-cute Jack Russell, the North American Jack Russell clubs work tirelessly to inform the public that at its core, this tiny package is a hunting machine. It is wild, not cultivated, and you best put on your boots, grab your shovel and head afield. Only then will they sleep peaceably by the fire. 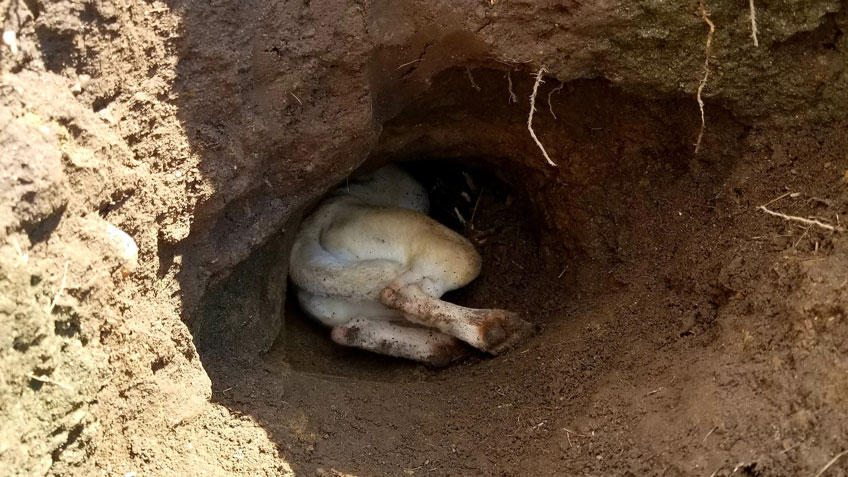 Jack Russells will lay on their side to move earth or to wriggle through an extra tight space. Their arms and chest should be flexible. (Image courtesy of Ted Ely.)