“They damage everything and have the ability to do epic harm,” warns Stephanie Shwiff, an economist with the U.S. Department of Agriculture (USDA). “Worse, we are just seeing the tip of the iceberg.”

Feral swine, as wild hogs are technically known, cause more than $1.5 billion in damage annually in 39 states and now in parts of Canada, according to the most recent USDA estimate. “It’s probably closer to $2.5 billion now,” said Dale Nolte, who leads a USDA feral swine damage program.

Wild hogs eat all types of plants and animals and are especially detrimental to nesting birds and mammals like quail, prairie chickens, wild turkeys and rabbits. They wreak havoc on everything in sight as they root, wallow and destroy food plots and wildlife habitat. As this NRA Hunters’ Leadership Forum website has shared repeatedly, most alarming is their tremendous reproductive rate. A sow can reproduce a litter of six to eight piglets at only 6 months old and have two litters per year. If you do the math, a pregnant sow can produce 50 offspring through three generations in a single year. No wonder hogs are out of control. 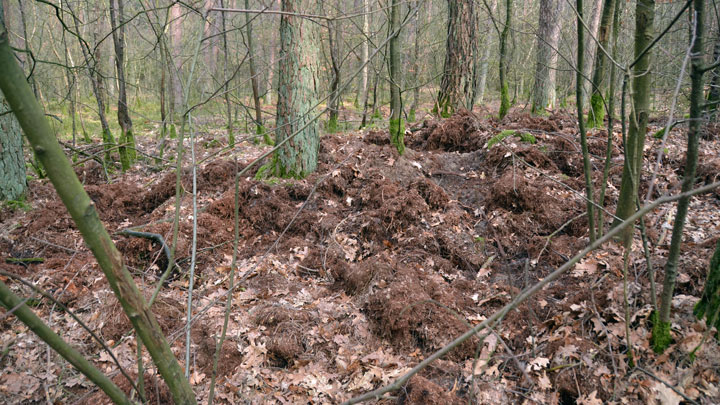 Feral swine are not native to North America. Some have lineages going back 500 years to when Spanish settlers abandoned them while other hogs escaped into the wild and rapidly became established. Because wild hogs are invasive species, they can be hunted 365 days a year and offer never-ending off-season adventure.

If you have yet to hog hunt, you will find it challenging yet adaptable to your favorite hunting methods. Wild hogs can be hunted day or night by almost any means, whether with firearms or archery equipment, and from helicopters or over bait. Killing them can be difficult as they inhabit the thickets. In the South this means the nastiest swamps. Such places are also usually snake- and bug-infested, making stalking them difficult.

Ranchers and outfitters often use bait to lure them to areas where they can be shot from elevated stands. I shot a Texas hog with a crossbow once and though it did not run far, I had to trail it on my hands and knees through brushy tunnels where the guide would not follow. Once located, we had a difficult time dragging the 100-pound carcass back to the vehicle. With estimates showing Texas may contain up to half of the nation’s wild hogs, and researchers at Texas A&M University saying the feral wild hog population could triple within a few years, the state has enacted legislation allowing hunters to kill hogs without a hunting license year-round on private land.

Last year I visited friends near Tampa, Fla., and took advantage of a hog hunting opportunity. We left early in the morning and drove two hours to hunt with Tiger Island Outfitters in Cedar Key. My friend and I spent the first two hours watching a feeding area from an elevated stand, but it was a warm day and the pigs were inactive. Next, we tried the spot-and-stalk tactic, which was more fun and interactive. We each hoped to get about a 100-pound boar since many consider that size the best eating. We soon learned this hunt was nothing like grocery shopping. These pigs were wild and aggressive.

I spotted a large boar, well over 200 pounds, and got to within 75 yards. It was rooting in a small opening, saw my movements and marched directly toward me, approaching to 25 yards. I stood still and it went back to its feeding spot.

By early afternoon, we each bagged our wild hog with a crossbow. Both animals charged when hit. Mine rushed to within a few yards, hell-bent on attacking.

War Declared by the Federal Government
In June 2019, the USDA announced it is offering $75 million for the eradication and control of feral swine nationwide. The 2018 Farm Bill included a new pilot program to help address the threats that feral swine post to agriculture, ecosystems and human and animal health.

Up to $33.75 million will be spent toward partnership efforts to work with landowners in identified pilot projects in select areas of Alabama, Arkansas, Florida, Georgia, Louisiana, Mississippi, North Carolina, Oklahoma, South Carolina and Texas that have among the highest feral swine population densities and associated damages. Although the deadline for initial applications passed, information is available online about the Federal Swine Eradication and Control Pilot Program or you can contact the USDA’s Lacey Williamson at [email protected].

Exercising Caution in Hog Territory
In November 2019, CNN reported that Christine Rollins, a 59-year-old caregiver to an elderly couple in Anahuac, Texas, was found deceased outside their home. Sheriff Brian Hawthorne said “multiple hogs” assaulted Rollins when she arrived at work while it was still dark.

“In my 35 years, I will tell you it’s one of the worst things I’ve ever seen,” Hawthorne told reporters. Jefferson County Medical Examiner Selly Rivers determined Rollins was attacked by different hogs because of the various sizes of the bites on her body. Injuries to humans from hogs are usually limited to bites or cuts from their sharp tusks. Fewer than 10 human deaths have been recorded nationwide since the 1800s.

Experienced hog hunters and wildlife officials say wild hogs are most dangerous when encountering a sow with piglets, a lone boar or one that is wounded. This latter point is significant because, despite their considerable size, they can be difficult to kill due to how mature boars have a gristle plate that protects their vitals from rival tusks and broadheads. Many rifle hunters I know aim for the head to assure an immediate dispatch.

Wild Hogs as a Food Source
According to Texas A&M University, wild hogs often carry infectious diseases such as swine brucellosis characterized by reproductive impairment or failure and issues in the bones and joints of breeding stock. It is called undulant fever when contracted by humans because body temperature rises and falls along with flu-like symptoms. Other diseases include bovine tuberculosis, which also can be transmitted to livestock. However, ample measures can minimize the risk of getting sick. When butchering a hog, wash the carcass to remove as much foreign matter as possible. Always wear gloves so your hands and skin avoid direct contact with swine blood or tissue. Cut and cool the meat as you would beef or venison and, most importantly, as the USDA recommends, generally cook pork until the internal temperature is 160 degrees.

Dispelling Wild Hog Myths
John Haughey and Jeff Johnston addressed several myths about hogs and hog hunting in the October 2019 edition of Outdoor Life. Within the mix was the myth that hogs cannot see. While hogs’ vision is not good, they clearly catch movement and have an excellent sense of smell.

As for the belief that broadside shots are best, they explain this is not necessarily true due to the gristle plate on a boar’s shoulder that increases as it matures. As an AmericanHunter.org article also noted, this shield is not bulletproof, but it can make a quick-expanding bullet set up too quickly. Choose bullets of at least medium weight that are designed to penetrate. For another option, consider a quartering away shot. For an instant anchor, aim at the base of the ear.

Regarding the “no blood trail, no kill” myth, wild hogs live in dense cover, making trailing them difficult. They sometimes do not leave good blood trails because their fat lining restricts blood flow and their hair absorbs it. When trailing, look for blood on vegetation as well as the ground. Be persistent as blood may not be found for 50 yards or so.

Finally, they addressed the myth that meat from a big boar is inedible. Not so, according to one of the authors, who likes boars up to 190 pounds and prefers younger males up to 150 pounds. He suggests that males are better eating than sows because females have two litters per year and are in poorer health.

I’d say their advice is good “food” for thought.

About the Author
An avid hunter and outdoor writer for four decades, Joe Byers has numerous award-winning articles and photographs to his credit. He is the author of “The Ultimate Guide to Crossbow Hunting,” covering crossbow hunting and gear and tips for hunting a variety of wild game species.