The Joys of Deer Hunting with Family and Friends

Photo credit: One week to hunt, two longtime friends and their two wives plus five kids adds up to countless memories.
More
SUBSCRIBE

The buck’s chest and belly sagged more than his counterparts' did, giving him away in the grey, early morning light even before his antlers were visible. The mule deer were loosely scattered on the end of the alfalfa field we had been watching patiently for the last day and a half, the only difference being this morning we had our rifles along as it was the Montana general-season opener. The specific buck we picked out was an age class older and had several kickers on his rack that made him a unique and beautiful deer that we were anxious to take if we played our cards right. Shooting light slowly crept upon us as the bucks started to angle our way, heading for the security of tall grass and private land to which we had no access. As the first of the bucks jumped the fence and the others strung out behind him, our buck separated for an instant and watched his cohorts clear the creaking wire ahead of him. Rachel settled into her rifle while Trek and I silently willed the bullet home. 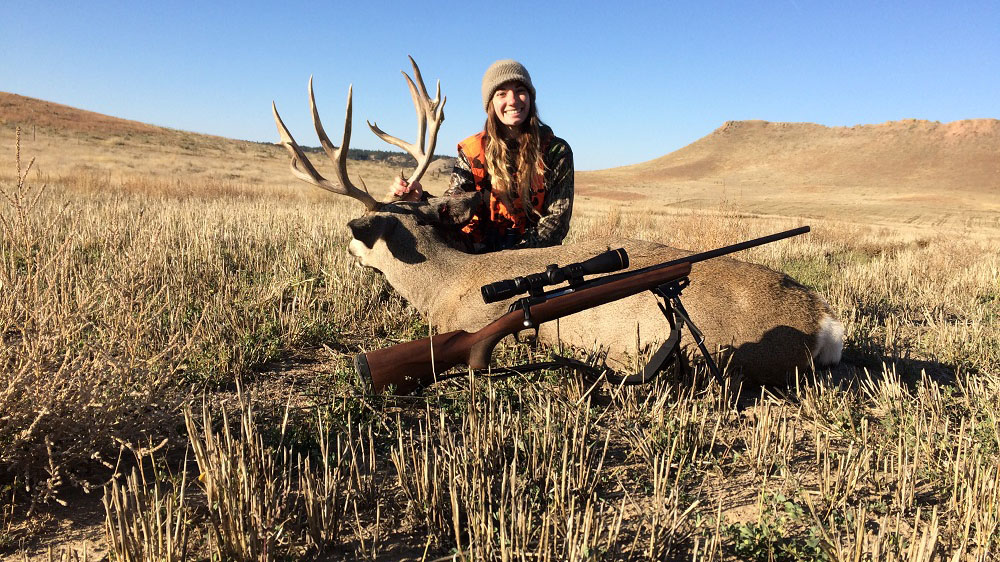 Rachel, the wife of the author's friend, opened the season for the two hunting families with her morning mule deer buck.

Almost a year before that buck stopped for Rachel, my longtime friend Trek and I were on the phone catching up, as we often do. We have been close friends since middle school, growing up in Montana together hunting, fishing, riding bareback horses in local rodeos and going to the same college. Life then took us in different directions with Trek moving to Idaho, marrying his wife, Rachel, and starting a family. I stayed in Montana, got married myself and started my own family. With the amount of memories we made as kids together, and not having made any in recent years, we decided it was time to stop making excuses and put some dates on the calendar.

After talking it over with our spouses, we decided to go for broke and take both families to my aunt and uncle’s ranch in eastern Montana to hunt mule deer. We knew it would make hunting more challenging with five boys under the age of 10, but it was important to have our sons get to know each other, as well as give our wives a chance to spend quality time together. Both accomplished hunters in their own right, they were immediately on board. 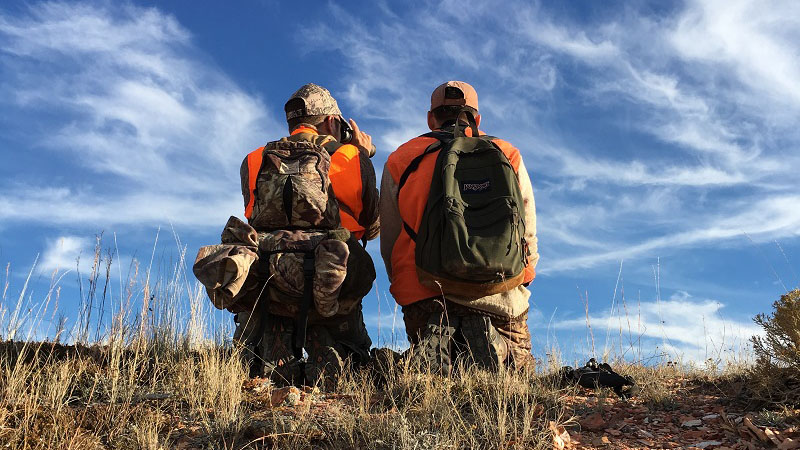 The author and his friend Trek glassed a herd of mule deer on a beautiful Montana morning.

I’ve had the opportunity to hunt many different game animals from Africa to Alaska, with varying degrees of planning and logistics, but few of those adventures compared to preparing for the mule deer hunt. Trek and Rachel had to apply and successfully draw their tags, get time off from work, and coordinate the boys’ schedules, all while Trek was away at military training with limited access to a phone and computer. As the day of departure drew closer, the food prep and packing began. Trek and Rachel started their 800-mile trip, keeping me in the loop as they drew nearer. My wife, Jamie, couldn’t get off of work until opening day, so I loaded the pickup with rifles, homework, sleeping bags, pack frames, snacks, drinks and my own sons and headed east to join the hunting caravan. 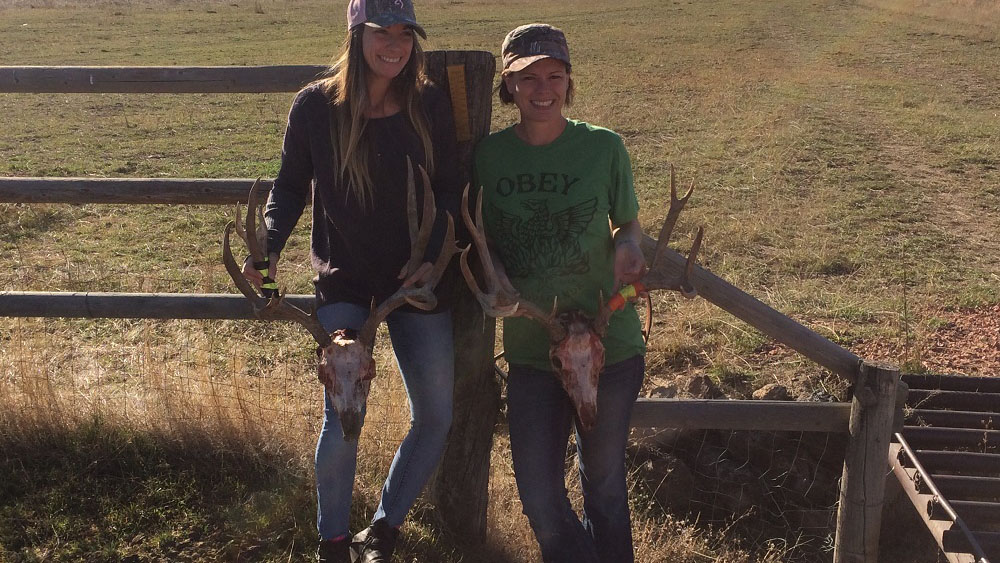 Trek's wife, Rachel, and the author's wife, Jamie, were able to get to know each other better while celebrating their own hunting successes.

There were several other people hunting the ranch as well, including my dad, so the evening before opening day we made a plan that allowed everyone a chance to hunt their preferred area. Trek and Rachel would hunt the part of the ranch where the kicker buck was living while I hung back with the kids waiting to hear how the morning went.

The alarm went off well before first light, rousing us and five little boys too excited to sleep. Trek and Rachel gathered gear and warmed up the pickup while I wrangled the kids. Shortly before they left, Dad called to say he was on his way to watch the boys so I could join Trek and Rachel. Off went the slippers and on went the base layers. Dad pulled into the driveway as I jumped in the pickup.

Having snuck to a vantage point in the dark, the kicker buck’s blocky body gave him away as we peered through our glass in the inky light. Not being able to get any closer because of lack of cover, Rachel got comfortable behind her rifle as we ranged objects the bucks might walk past. The sun started to rise as the deer made their way toward the fence. As the kicker buck separated and stopped, with Trek and I watching through binoculars, Rachel fired a 140-grain bullet. The buck crumpled. For a moment we were in awe of what just happened. She had planned this for months and driven 800 miles for an opportunity like the one on which she’d just capitalized. After the pictures and field-dressing we sat down and soaked in the sunshine, replaying the hunt. Jamie joined us that evening so the four of us were finally together, capping off a stellar hunting day by watching our boys play together. 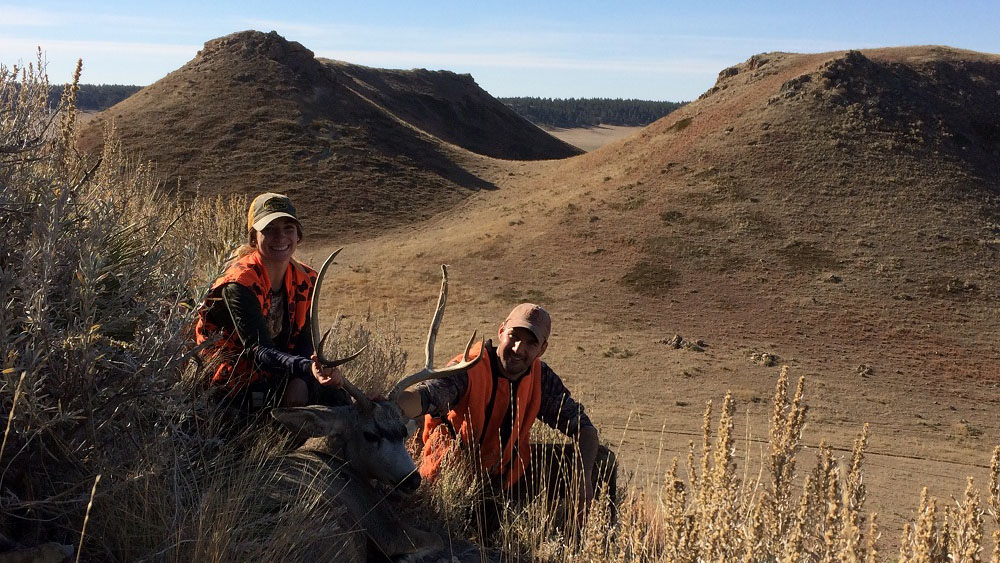 By swapping babysitting duties, the adults all had time to hunt. Here Rachel and Trek stop to appreciate Trek's buck, grateful for the meat for the freezer.

With Rachel having tagged her buck, she graciously took on the babysitting duties so Trek, Jamie and I could hunt. That evening found the three of us perched on a rocky point, watching a group of bucks with a very respectable five-by-five bringing up the rear. With déjà vu of the previous morning’s hunt, Jamie laid prone as the buck walked into range with Trek and I watching. The buck stopped, the trigger broke and Jamie had her buck, one of her best to date.

The four of us each had a doe tag in addition to Trek and I having remaining buck tags so Jamie took a turn with the kids the next day to allow Trek, Rachel and I to go for a morning hunt. We found a small herd of does that seemed to be in a position for a stalk. The stalk didn’t pan out but not before we saw a buck slide around the corner of a butte above the herd of does. We recognized him from our earlier scouting due to his unique frame, sporting long G2s with no sign of a fork. Given the time of day, we figured he was going to bed in the shade where he disappeared. Trek had been hoping for a buck to rival his wife’s but seeing where the G2 buck was headed, he said he would be very happy with him. We circled around to get our wind right and, knowing the deer likely would be facing downhill, we gained elevation out of sight then slowly snuck across the shady sidehill. Trek spotted the bedded buck, looking down the face of the butte. A “crack” from his .270 filled his Montana buck tag.

With three of the four of us having bucks, I focused on taking in the experience and enjoying our group’s unique opportunity to spend time together. With doe tags left, we included the kids in our glassing for game. I’m sure it would have been more efficient to split up, but with two pickups full of hunters and children this way was a lot more fun. Jamie and Rachel harvested their does the next day. On the last day of the hunt, I woke up my oldest son and brought him with Trek and me to the area where Rachel got her buck. The sun started to come up and revealed a herd of deer below an outcropping of rock. Trek and I got in position and with my son Sage watching, wide-eyed and excited, we added two more deer to the year’s supply of venison.

We spent the afternoon packing for the morning drive home and reminiscing about our week. The boys played as if they’d known each other since birth, as the adults discussed future plans to soften the blow of having to leave. Trek and I went for one last hunt on the off chance a big bruiser would show himself on the last evening and I’d fill my tag, but the sun slid toward the horizon, leaving us heading back to our families in the dark.

It was a crazy week with little or no downtime between watching kids, hunting and processing game. Watching Trek and my sons play together and our wives grow closer while we taught the kids where their yearly supply of food comes from was worth every minute. I pulled onto the highway, a sudden bit of dust in my eye clouding my vision, reminiscing about two Montana middle-school kids who loved to hunt and five little boys who had gotten their first taste of a lifestyle that was just starting to take hold.