When Hunting with Kids, A Deer's Age Isn't Everything

I came of age as a hunter in the 1990s at the height of the “trophy management” movement, which colored my entire outlook on whitetail deer hunting. A buck’s age became my primary concern since more years meant maturity and greater antler growth. I couldn’t control genetics and, though I did my best to influence nutrition, letting bucks mature became my best management tool. It took me several years and the smile of a 5-year-old to realize that I had probably taken this mindset too far.

My son began hunting with me at the age of 4. He did a relatively good job of staying still and quiet for a boy of his age, but his pale face and blonde hair didn’t exactly blend in with the woodland environment. I started filling my pack with snacks to keep him occupied and carried a suppressed rifle to protect his hearing. We didn’t see as many deer as I normally did when I hunted alone, but it didn’t matter. He was enjoying the time spent one-on-one together and so was I. All we wanted was a mature doe—we weren’t being greedy—and still, we struggled.

When I’ve been after bucks, I only seem to see does, but with a doe on the menu, all we seemed to see were young bucks. The wary old does were probably too wise for our fidgeting and whispering. Time after time we would sit quietly waiting for the deer to show up, and, when they eventually did, I quenched my son’s excitement by telling him that the buck we were looking at was “too young” and that he needed another year or two before we would go after him. I would do my best to explain why we passed on the buck on the ride home, but I could tell that he was disappointed. 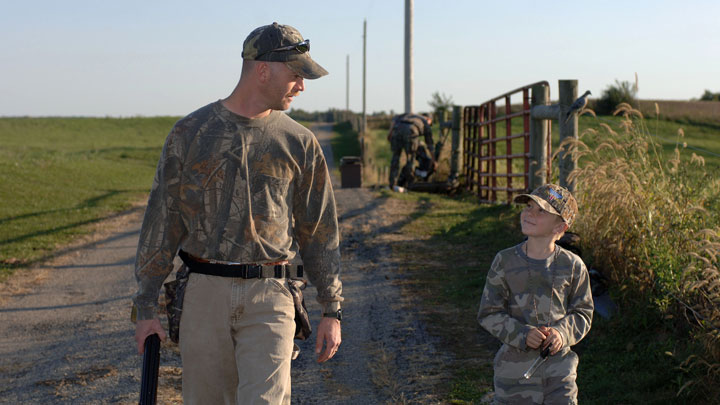 Hunting with children means keeping the joy of hunting alive for young hunters. Sometimes you just have to take a deer. (Image courtesy of the Ohio Department of Natural Resources.)

We went an entire season without firing a shot, at least while James was with me. On the rare occasion when he decided that eating crackers at his grandmother’s house was more attractive than shivering in a treestand, I would usually kill something. I had an entire off-season to think about ways to find success and eventually decided that a ground blind was our best option. Not only was it safer than having him climb a ladder, the camouflage material would allow him to move around a bit without being spotted by clever eyes.

Our rifle season is long in Alabama and I rarely see mature bucks until our mid-January rut gets into gear. This year was an exception, though, and I managed to take a mature 10-point on the opening weekend. Of course, my son had opted not to join me that evening. He went back out with me several more times and, you guessed it, we saw several 2- and 3-year-old bucks, including an 8-point that had some real potential. We passed on them and he took it like a champ, having grown used to the idea of passing on just about everything. One day, after watching a young buck feed for what seemed like an hour, we were walking back to the truck when he asked a perfectly good question: “If we don’t shoot anything, how are we gonna get the chicken?” It took me a minute to realize what he meant; he wanted some venison. I had taken the joy out of hunting.

The clue that I was doing it wrong should have hit me when his first reaction to spotting a deer would be to ask, “Is he old enough, Daddy?” My answer was always a negative and the excitement drained out of him. When he told his classmates that his daddy “never shoots deer, only trees [targets],” I had all the evidence I needed. It was close to Christmas when I found the time to hunt with him again. It rained all day and I continually checked the weather forecast, hoping that the front would pass by that afternoon. It didn’t, so we decided to brave the rain for a chance at putting some deer chicken in the freezer. The rain might cover some of our noise and scent anyway, giving us the break that we needed. We had probably been sitting for two hours when I saw them, a group of does and yearlings headed into the clearing in front of us. 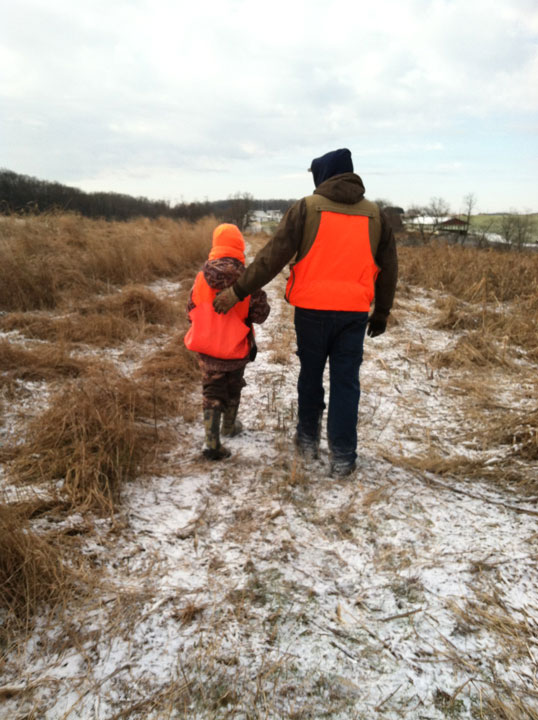 Hunting with kids means that you must walk the line between not always taking an animal and never taking an animal. Don't let your young hunter lose interest in the sport. (Image courtesy of Maryland Department of Natural Resources.)

As they walked suspiciously into the wet grass, their eyes darted and their ears flickered. When I reached for my rifle instead of my binoculars, my son’s face lit up. “Are you gonna shoot them?” he asked. I nodded as I rested the forend and pushed the safety lever forward. He held his ears and I fired a muffled shot at the heart of the largest doe in the group. It was an easy shot and I knew that we would find her nearby. I guess he expected her to collapse where she’d stood as I’d told him the buck had done a few weeks earlier, and, when we emerged from the blind, he thought that I’d missed. He had lost faith in me, thanks to so much inaction.

We swept a wide circle just inside the treeline, expecting to see her in pine needles at any moment. Our search turned up nothing. He was sure that, once again, we’d failed in our task of putting meat on the table. We went back to where she’d stood when I fired, and I spotted a tiny drop of blood on a blade of grass, the stain already diluted by the falling rain. Dusk was setting in, and I quickly realized that my over-40 vision now was a handicap when it came to following the minuscule blood trail. He stepped in, and, with me coaching him on what to look for, we moved from one faint droplet to another.

We walked 50 or 60 yards before I spotted her white belly under the tall pines. I knelt beside him and pointed to her and watched as his face lit up in a beaming smile. We hugged and I patted him on the back, proud of his patience and stoic perseverance. He rubbed her smooth wet coat and pointed to where the bullet had entered, right where I’d aimed. I unloaded my rifle and began the process of dragging her uphill toward the clearing—he grabbed a leg and did his part. Neither of us could wipe the smile from our faces. He might not know chicken from venison, but he knows where meat comes from. He may be new to hunting, but he taught me a lesson.