How a Hunting Trip Helped a Combat Veteran Heal

Photo credit: Courtesy of John Irwin: Sgt. Steven Checo of Queens, N.Y., received at least two gunshots during a firefight in the vicinity of Shkin, Afghanistan. In a field hospital, the soldier died during surgery. Among the enemy dead at the battle site was a Chechnyan.
More
SUBSCRIBE

John Irwin grew up in Pennsylvania where as a teenager his uncle exposed him to small-game hunting, and then to turkey and deer hunting. His grandfather served as a communications specialist during the Korean War, and Irwin always knew he wanted to join the Army. Before he started his senior year in high school, he had signed his contract with the U.S. Army to become an Airborne Infantryman. He arrived at Fort Benning in the summer of 1999 and after basic and advanced infantry training and Airborne School, he became a TOW gunner with the 82ndAirborne Division. A TOW is a tube-launched, optically controlled and wire-guided anti-tank missile. “It was a blast,” Irwin said of the job. He was assigned to Delta Company, 2nd Battalion, 504th Infantry Regiment. 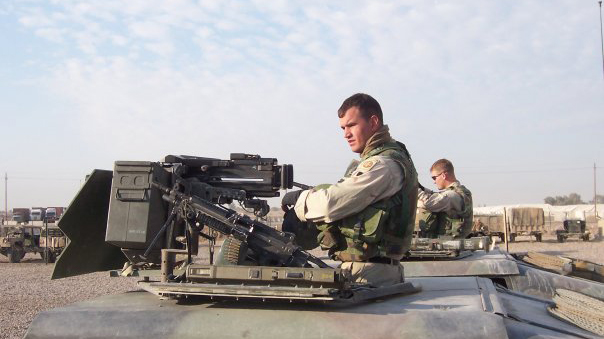 John Irwin, who would obtain the rank of sergeant, mans a vehicle turret in Iraq.

As his three-year contract was winding down, 9/11 happened and he reenlisted for six years. It was a decision that would bring him to both Afghanistan and Iraq. His first deployment in 2002-2003 was to Afghanistan. He found himself in places like Kandahar, Gardez, Forward Operating Base (FOB) Salerno and Firebase Shkin. As this tour was coming to a close, on Dec. 21, 2002 on a patrol near the Pakistani border, Irwin’s squad leader, Sgt. Steven Checo was killed. The loss left an impact on Irwin for a couple of reasons. First, although one is in a combat zone and loss of life is rationally expected, it’s is always “unexpected” when it strikes one’s unit. And second, Checo was a great guy and an even better soldier. “He was one of the best leaders in our platoon. He always did the right thing,” Irwin said. “I wanted to be like that.” And so, as it is for so many associated with the military, every day became Memorial Day for Irwin. (The N.J. Run for the Fallen, which honors service members from New Jersey who made the ultimate sacrifice, will be held Sept. 25-29 and will honor Sgt. Checo.)

Irwin returned home for a few months and was then sent to Iraq. From FOB Mercury in Fallujah he helped provide heavy-gun security for convoys. IEDs (Improvised Explosive Devices) were becoming a daily occurrence, but the proper treatment for brain injury had yet to be implemented. In December 2003, Irwin’s unit was tasked with securing a route for the Iraqi Army’s recruitment efforts. He was in the turret of a truck trailing the rest of the convoy as it made a turn onto the main road. “I saw a fuel can on the side of the road,” he said. Through the headset, “I heard the I— in IED in my ear.” And then he felt the explosion. 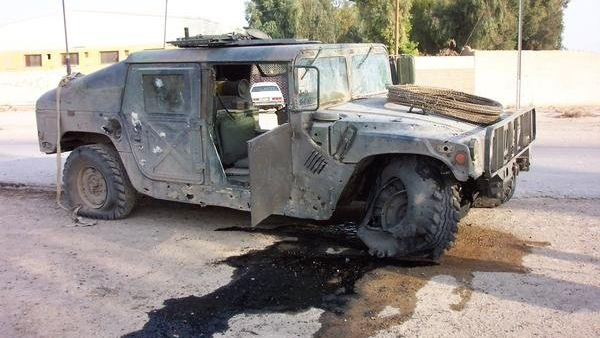 The explosion left the vehicle inoperable. Within seconds, soldiers arrived to provide added security, treat and extract the wounded and collect any sensitive material or equipment, all while unfriendly townsfolk advanced. The men did not engage.

Within seconds, lead vehicles returned to help. One man below Irwin was out of the vehicle providing security, but another lay motionless. It took a moment for Irwin’s brain to catch up with what had happened. He got down to the injured man and helped move him to the medical vehicle so a medic could administer care. Adrenalin was coursing through Irwin’s veins so he had no idea that he too had received shrapnel wounds. He wore a neck gator, which kept his own blood contained. He assumed any blood on him was from the process of moving the injured man. The medic, after a few choice words of annoyance, had to grab Irwin’s hand and place it on the side of his face before Irwin registered his own wounds.

Nobody yet knew about how cooling the brain minimized swelling. Irwin’s eyes ached, his ears bled and his head felt like it was splitting in two. After 24 hours of bed rest, he was sent back out. “It was a high-op pace” for the rest of the tour, “mission after mission.” Nine months later he was back home. He met his wife, Brenda, in October 2004, and the couple has three children. 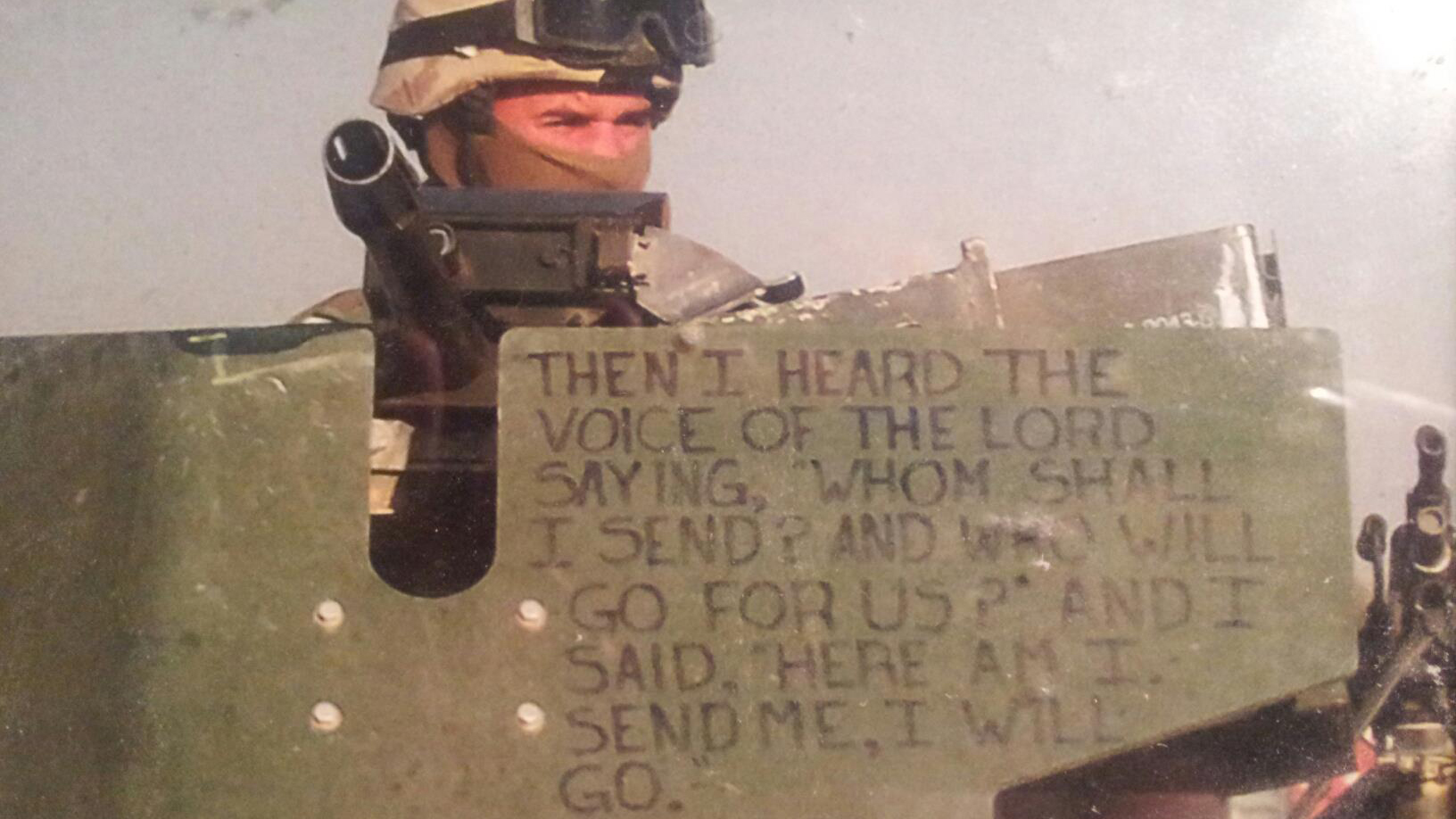 In addition to this quote from the Bible's Book of Isiah, another favorite of soldiers comes from the Book of John: "Greater love hath no man than this, that a man lay down his life for his friends." (Note Irwin's neck gator, which contained his blood, making him unaware of his own injuries.)

His final tour was to Afghanistan, 2005-2006, where he got the chance to fly over areas where community development projects were non-existent on his prior tour, but were now complete. He could see where work was underway and the growth that had materialized because of those projects. He knew then that the efforts of the U.S. military had brought about some good. 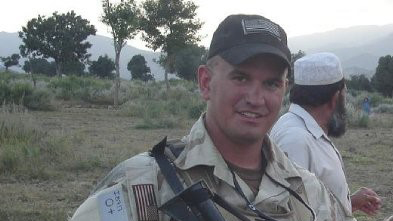 Irwin's easy smile and relaxed way with people make him a natural for inspiring other veterans to grab ahold of whatever help they need so that they can live full and happy lives.

After having an ankle surgically repaired and then reinjured, Irwin was medically discharged from the Army. He applied for law enforcement work, but entrance to the academy was delayed, and then he moved out of the town that had intended on hiring him. Through the now-disbanded Tip of the Arrow Foundation, he got a job and eventually volunteered to help approximately 40 veterans in their search for employment or resources. Then he worked for a New Jersey state congressman as a veteran field representative, assisting veterans with everything from initial claims with Veterans Affairs to grievances against the military. That two-year fellowship garnered him the experience he needed to start his own non-profit helping veterans to get physically active. He began to realize he simply didn’t have the connections to fund what he wanted to accomplish.

Then friend Nathan Humphrey, Freedom Hunters Virginia regional director, invited Irwin to the Benelli USA Invitational. (The 2018 Benelli invitational raised $85,000 for Freedom Hunters.) And it was while skeet shooting that he met more people from Freedom Hunters. He was invited by Jim Hazlitt, former outreach coordinator for the Northeast, to go on an eight-day hunt in the Adirondacks. Irwin found it tough getting back into the woods. He had only gone hunting once since his return, but this trip changed his life. Irwin loves the outdoors and he’d seen mountains before, but he had never seen the ranges he saw in the Adirondack Mountains. He told himself that just being there was an experience of a lifetime; the hunt was secondary.

Yes, the beauty calmed his mind, but the physical exertion during the strenuous hikes told him that the only thing holding him back was himself. “It was motivating,” he said. He described how just sitting without the planes and cars and people talking, was therapeutic. He experienced an overwhelming sensation of feeling like he belonged there. “I was home,” he said. 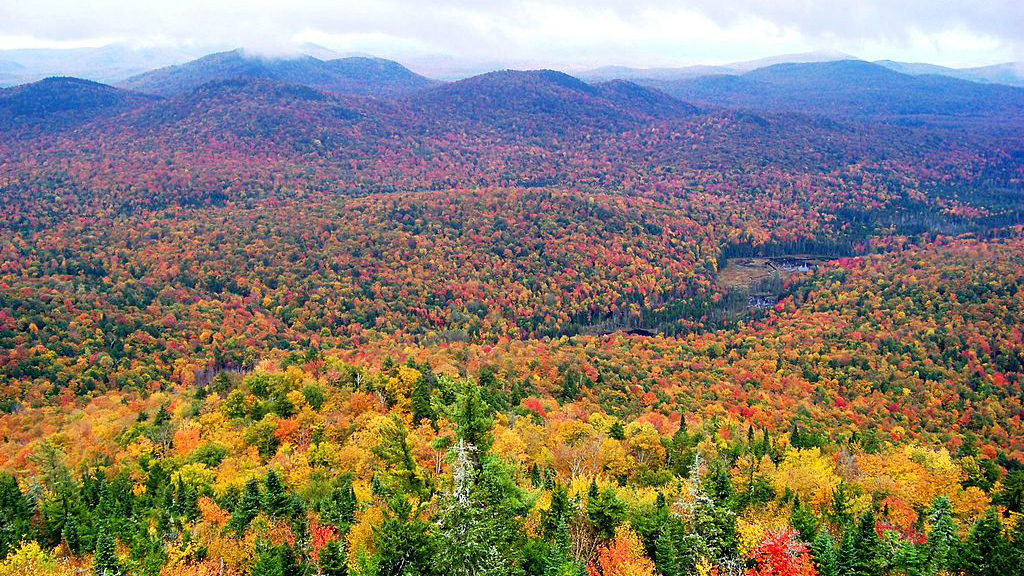 Don't let the beauty of the Adirondack Mountains fool you; hiking and hunting in this region is not easy, but the experience is worth the effort.

He gravitated toward another Veteran on the trip. They ended up sitting around the campfire until everyone had gone to bed. They talked through the night, laughing, crying, joking and everything in between. That Veteran is in his final fight to have the government recognize the cancer-causing effects of burn pits. He is in his 30s, with a wife and children. The men needed what they experienced that night. They had “chewed the same dirt,” as Irwin says. They understood each other. 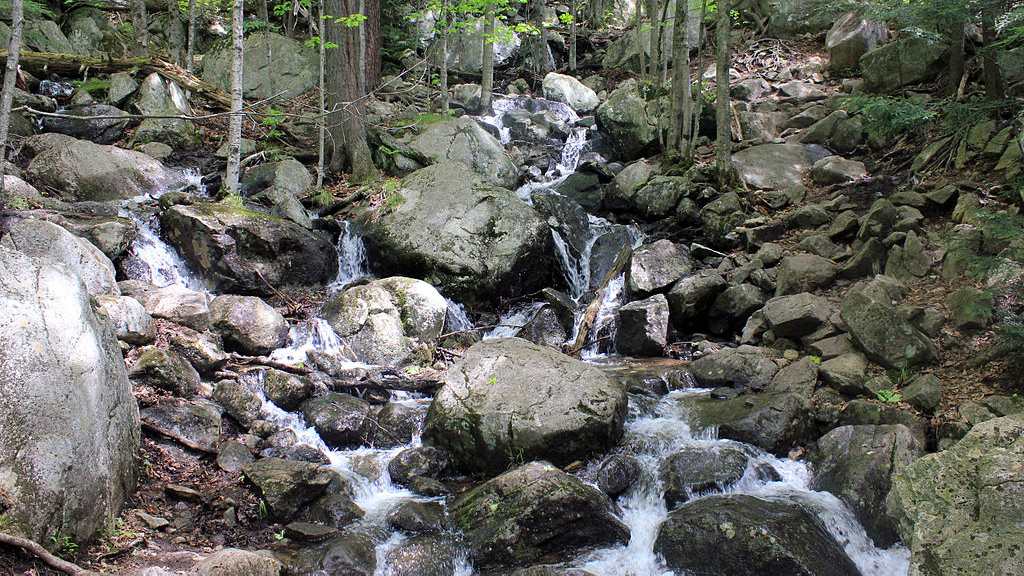 If you've ever seen the movies "Revolution" or "Last of the Mohicans," you have an idea of the challenges of the terrain in the Adirondacks.

Of the trip, Irwin said that he “felt like an enormous weight had been lifted off his shoulders.” Brenda noticed a difference when he returned.

Eventually, he sent in an application to volunteer for Freedom Hunters. He’s in now charge of logistics, making sure guys have their hunting licenses, that they’re where they should be and have what they need. “To give back is phenomenal. To laugh and joke—it’s an honor to be a part of it,” he said. He sees guys show up and they’re very quiet. “To see them opening up is just incredible.” Now, Irwin is Freedom Hunter's regional director for the Northeast.

Soldiers take an oath to never leave a man behind, and that doesn’t stop when they take off the uniform. One Thanksgiving Irwin got a call as he was sitting down with his family to eat that a member of his platoon had committed suicide. He had been active on social media and was the life of the party. Everyone who knew him was shocked. His wife was left to find him. Veterans play “what if” with situations like this every day, all day, but through tears Irwin says, “If I can save even one life…” 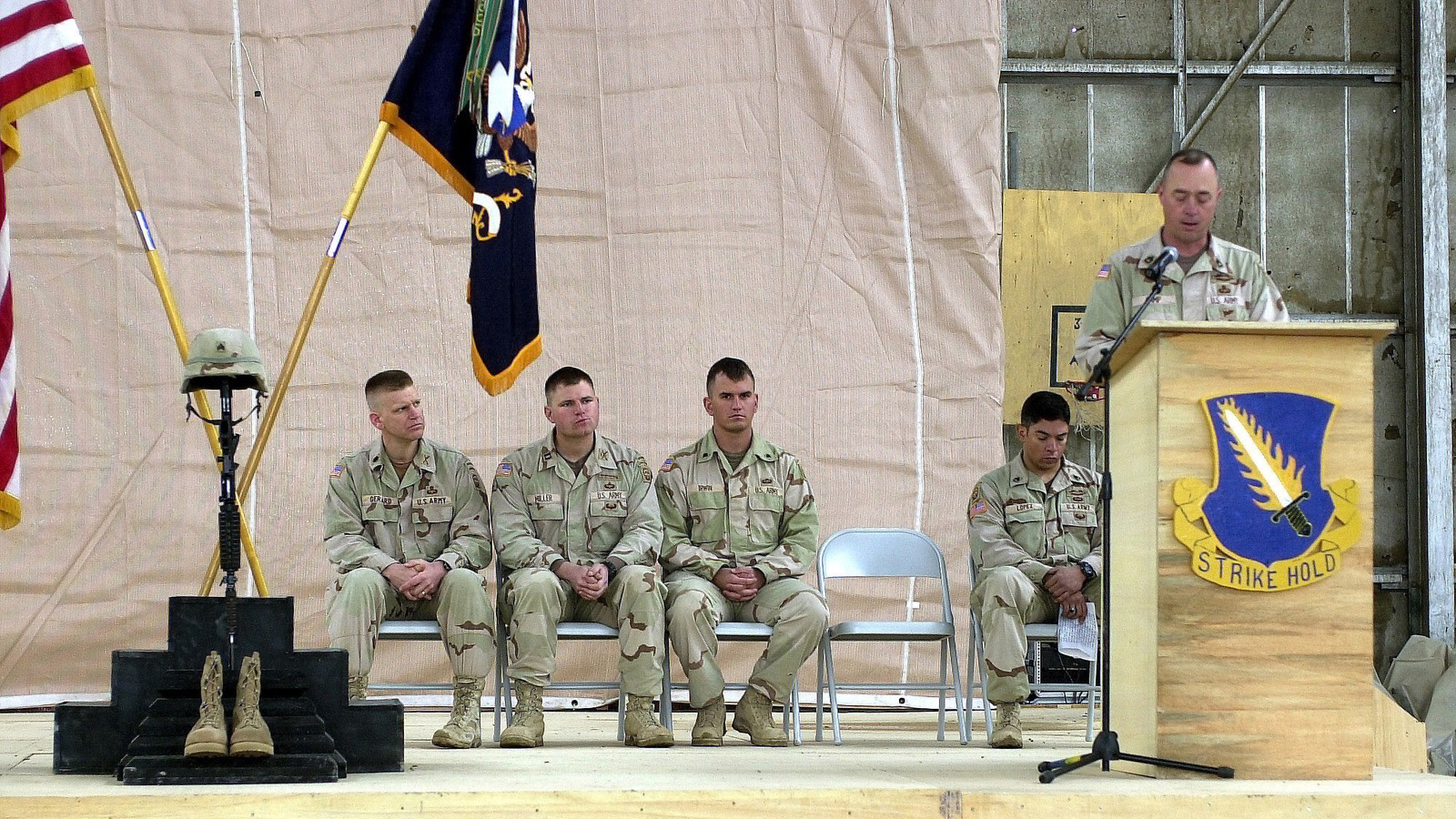 "Not a day goes by when I don't think of Checo," Irwin said. He so admired the fallen sergeant from the Bronx that he named his son after him.

Irwin doesn’t want thanks. All he wants is to see a veteran take the help and run with it toward a successful life. Freedom Hunters recently received a call from a soldier who was worried about his friend. Although he hadn’t admitted it, the man thought his friend was suicidal. Freedom Hunters arranged what they refer to as a trifecta for these battle buddies. Over the next week, they enjoyed a waterfowl hunt, a deer hunt and a salmon fishing trip. It wasn’t long before Freedom Hunters received a letter from the struggling veteran thanking them. It read, “You saved my life."

About the author:
Erin C. Healy is the associate editor of the NRA Hunters' Leadership Forum. She edited a lifestyle magazine on Cape Cod for 14 years and provided marketing services for her local guntry club prior to working for BLADE magazine and a regional recreational fishing magazine. She served in the U.S. Army, is an NRA Life Member, a National Wild Turkey Federation member and sends her Jack Russell Terriers to ground as often as possible.