At least they tried.

The Washington Post recently ran an article on the lifting of the elephant hunting ban in Botswana with the premise being the ban was harmful to rural people. And though they tried to offer a balanced narrative, the facts as presented show either the Post does not know the difference between conservation and preservation, or their inherent bias against hunting cannot be suppressed.

Botswana is home to nearly one-third of Africa’s elephants. Sustainable hunting of elephants took place from independence in 1966 until January 2014 when then-president Ian Khama banned elephant hunting by executive fiat. Before the hunting ban, Botswana’s elephant numbers grew rapidly: from 80,000 in the mid-90s to around 130,000 in 2014 when hunting was stopped. Curiously, since the hunting ban, the elephant population has remained steady.

Overpopulation and the Human Toll
Like most conservation issues, it is a matter of habitat.

Many scientists who have studied Botswana’s elephant population conclude that in periods of severe drought, there is sufficient habitat in the country to support 50,000 jumbo. It does not take advanced math skills to see the future problem Botswana is facing, but there are more immediate issues than a potential mass die-off. The overpopulation of elephants is not only destroying wildlife habitat, it is devastating the economies and even the very lives of rural Botswana residents who must compete with the elephant.

Raising crops in an arid land is difficult. Doing it with hand tools and animal power makes it all the more so. But when harvest time comes, be it for watermelon, sorghum or the staple maize, the elephants come to feast, often leaving the farmer with nothing but the havoc of trampled stalks and broken melons. Understandably, some farmers take matters into their own hands, using everything from drums, jingling tin cans or the crack of bullwhips to scare the elephants away, which works sometimes. But elephants are highly intelligent creatures and are seldom fooled by non-lethal deterrents for long. When an elephant, especially a young male trying to build size and strength to compete for mates, is intent on feeding and a rural farmer is intent on stopping him, the resulting human-animal conflict often ends with the death of one combatant or the other. Hundreds of elephants die this way. In the past five years, about 200 rural Botswanans have been killed by elephants. 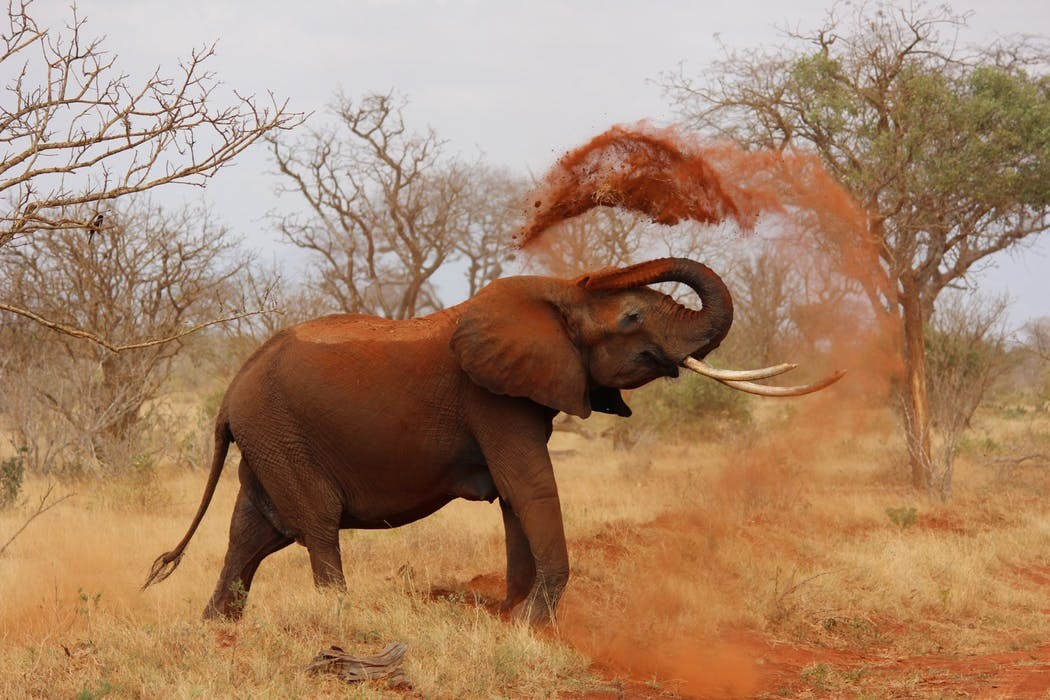 Elephant Hunting Will Not Solve the Problem—But It Can Help.
When the current president of Botswana, Mokgweetsi Masisi, lifted the hunting ban, many “First World” nations and NGOs (non-governmental organizations) decried the move. From the comfort of their homes in Europe and the United States, the affluent “conservationists” of the world called for boycotts of Botswana and predicted all sorts of calamity for elephants. But when one looks at the issue with the dispassionate eye of a mathematician, it is easy to conclude hunting in Botswana will have virtually no effect on the elephant population. It is simple math.

In the 10 years prior to the hunting ban in 2014, Botswana’s CITES (Convention on International Trade in Endangered Species) annual export quota was between 420 and 800 elephants. But not every hunter was successful. During the same period, an average of 321 CITES permits were issued annually for the export of elephants from Botswana. Taking into account some hunters may not have chosen to export their jumbo, and a small number of hunters were natives of Botswana, it is easy to surmise the proposed quota of 400 elephants would result in a harvest of perhaps 300 elephants annually, or 0.0023 percent of the population. Phrased another way, that's one-fourth of 1/1000th percent of the herd. Clearly, elephant hunting will not have a statistical effect on the overpopulation of elephants in Botswana, which begs the question: Why are the anti-hunters so incensed? It is because they hate hunting and hunters.

Here I could go on and on about the tsunami of incidents where the animal rights extremists have, in the name of preserving life, threatened death and bodily harm to hunters. Most of us have experienced it in one form or another. In my years of dealing with antis, I have found that those who are motivated by emotions are willfully oblivious and will not consider the facts and science of conservation. Importantly, one of these facts is how hunting creates economic value in wildlife and how said value pays for the conservation of species. This is where the Washington Post article misses the boat.

The True Worth of Hunting Is Clear.
The Post article includes interviews with rural Botswanans who have lost crops and loved ones to elephants and illustrates the life and death issues people face while living with wildlife. The piece even alludes to the change in attitude rural people are experiencing now that they see the government is responding to the need to control the elephant population, even if the reintroduction of hunting will have little effect on their numbers.

But what the article completely misses is the true value of what hunting means to the poorest of the poor Botswanans and what it means for other wildlife.

Before the hunting ban, Botswana’s San (Bushman) communities outside the Okavango Delta’s protected areas earned hundreds of thousands of dollars annually from selling their quotas to hunting safari operators who lease areas where wealthy photo-tourists seldom go. While Humane Society International (the international counterpart of the HSUS) and “eco-warriors” of the world claim the benefits of hunting seldom trickle down to the indigenous people, I can tell you from hundreds of first-hand observations that this assertion is dead wrong. In almost every instance, hunting benefits both indigenous peoples and wildlife.

As noted by this website, in impoverished areas deep in the bush, hunting operators are often the only source of employment for locals. While filming an elephant hunt with Graeme Pollock’s Safaris Botswana Bound (SBB) in 2000, I saw 26 members of the local community employed by SBB’s hunting business. From trackers, skinners, drivers, cooks, maids, servers and anti-poaching patrols to the man whose sole responsibility was to clean the soot from lanterns deployed throughout the camp at night, these people had jobs, income and the sense of pride that comes from work that would not have existed but for hunting. But jobs were not the only benefit the people received.

As part of SBB’s contract for the hunting concession, permanent improvements to the community’s infrastructure were made. Revenue from hunting built roads, a school and a medical clinic. It paid the salaries of the teachers and medical staff as well. Hunting also provided a tremendous amount of protein in the locals’ diet as the harvest of one elephant, much more so the ten bulls on quota, fed hundreds of families throughout the region for months with nutritious meat. But the improvement to the lives of local Batswana was only half the story.

This elephant hunt had a special purpose. Funds from the purchase of an auctioned elephant hunt that was donated by Pollock to the Dallas Safari Club went to drill a borehole in SBB’s NG 47 concession, or hunting area. The well achieved two purposes to improve the lot of wildlife: 1.) It provided a permanent water source for animals in the arid land, and 2.) it kept bulk grazers like zebra, wildebeest and especially elephants from migrating to the Okavango Delta in the dry season, giving some relief to the imperiled trees and other habitat in the over-pressured Delta region.

Hunting concessions like NG 47 acted as buffers between game parks and farmland, and boreholes in the concessions paid for by safari operators meant that wildlife need not move into farms or stressed habitat in search of water.

Then came the hunting ban, and hundreds—perhaps thousands—of animals died.

Without revenue from hunting, Graeme Pollock had no option but to relinquish NG 47 back to the Khama government. Not surprisingly, when the last of Pollock’s diesel ran out, no government man was there to fill the fuel tanks and the pumps stopped. Soon the waters of the large, lush pan dried up in the hot, arid sun and the only water most animals had known for 14 years was gone. The elephants knew to head to the Delta, but large herds of buffalo, wildebeest, zebra and countless other species that had depended on this pan their entire lives died en mass of dehydration.

But they did not have to die. They died because of the hunting ban.

The Hunting Ban Changed Attitudes and Emboldened Poachers.
When elephants were hunted, their numbers in Botswana increased by 60 percent between 1994 and 2014, from 80,000 to 130,000. But when the hunting ban was implemented, the population growth stopped. Though counter-intuitive, this begins to make sense when one considers how former hunting operators protected their investment in concessions and when one understands human nature.

As mentioned earlier, the San communities near the Delta collected $600,000 per year from safari operators for their hunting rights. Quite literally, the hunting concession holder’s stock-in-trade was the wildlife within the borders of his concession. With such a significant investment just to lease the hunting rights, you could be sure the concession was constantly guarded by several anti-poaching patrols who saw to it intruders were dealt immediate justice.

But yet again, when the revenue from hunting stopped, so too did the guarding of wildlife. With no one left with a financial interest in the elephants, the poachers arrived and the wildlife slaughter began.

The indigenous people's attitude about wildlife changed as well.

It is clear poaching has increased in Botswana since hunting was banned, but losing the anti-poaching patrols is only half of the story. When legal hunting occurred, the locals tolerated the loss of crops and the danger of living with elephants. After all, elephants were the reason the hunters came and hunters benefited local lives and economies in a positive way. But when hunting stopped, or more precisely, when the revenue from hunting stopped, the elephant that was once an asset became a liability to the indigenous. As such, people were not nearly as interested in stopping poachers from stealing their wildlife. In fact, they welcomed it. Rural people assisted ivory poachers and often, locals became poachers themselves. The high-value, low-volume quota elephant equation was flipped on its’ head. Elephants were now a low-value commodity. To make up for the revenue shortfall, more elephants had to be killed.

Let Africa Lead.
But that was before May 23, and it is a new day in Botswana. President Masisi’s reversal of the hunting ban has not yet put hunters on the ground, but that day is coming. Hunting will not cure the country’s elephant problem, but it will provide an important tool for the management of this iconic species. Among the people that must live next to wildlife, there is a newfound hope that conservationists will prevail over preservationists. The reestablishment of hunting in Botswana is an important first step to this end.

There is also renewed hope over the courage of a new breed of African leader, one who has resisted the pressure from animal rights extremists and the radical eco-tourism industry to do the right thing by his people and his country’s wildlife. Africa’s natural heritage is a world treasure, and allowing Africans to decide what is best for their species and their people is simply the right thing to do. The anti-hunters' boycotts and bans and insistence that Africans comply with their superior First-Wold view of conservation is intolerant, immoral and by definition, racist.

The president of Botswana summed it up quite well:

“It startles and bamboozles me when people sit in the comfort of where they come from and lecture to us about the management of a species they do not have.” –Mokgweetsi Masisi

About the Author:
Steve Scott is a self-proclaimed reformed attorney, long-time university instructor, and producer and host of the Safari Hunter’s Journal and Outdoor Guide television series. For more information, visit SteveScott.TV.