Anti-fur extremists all but eliminated the fur trade in Europe, banned the sale of fur in Los Angeles—except fur from animals trapped by California Fish and Game license holders—and look to force a similar ban in New York City. Not only is the fur industry fighting back, bolstered by growing consumer demand for real fur, but, interestingly enough, the African American community and religious groups such as Hassidic Jews are also speaking out against bans in efforts to preserve the traditional and cultural uses of fur.

In essence, anti-fur radicals successfully brainwashed more than a generation into thinking that fake fur is more humane and environmentally sustainable than real fur. It’s not enough that they’ve compelled fur farmers to improve animal husbandry practices, forcing the worst out of business, or that designers often turn to faux fur when creating their fashions. No, they want to wipe out all vestiges of consumer choice, even in the most environmentally friendly segment of the industry: wild fur.

If you don’t follow fashion industry news, you might not be aware that real fur is making a comeback. Improvements in the look and feel of faux fur—ironically—are fueling an increased interest by both designers and consumers in real fur. Fashion models who once appeared naked in anti-fur advertising are now showing up adorned in real fur, and bandits are ripping fur-adorned jackets right off people’s backs. Anti-fur terrorists stowed their buckets of red paint from the 1980s and traded them for shaming and threatening on social media, but that opened the door for fur proponents to expose fake fur’s harshness on the environment. 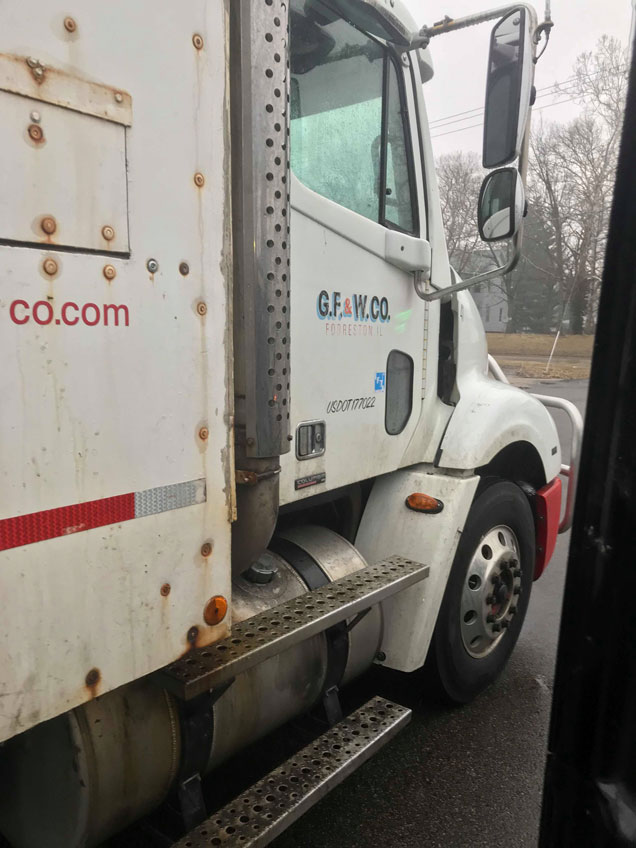 GFW plans to add additional trucks to its routes in the fall. Follow them on Instagram @furandwoolmarket for updates to schedules and additional stops. (Image by Curt Green.)

As Will Coggin, managing director for the Center for Consumer Freedom pointed out in an op-ed, much of the microplastic particles that turn up in water supplies and eventually in the oceans stem from washing your clothes. Today, nearly every garment is made with at least some synthetic fibers derived from petroleum-based plastics. Though you wouldn’t normally be washing your fake fur, in today’s fast-fashion world, it often does end up in a landfill, where not only will it take centuries to break down, it has the potential to leech microplastics into the groundwater. In contrast, owners treat real furs as family heirlooms, passing them down through the generations. Eventually, they may get recycled into smaller items for home or wardrobe.

The International Fur Federation, of which Fur Commission USA is a directing member, stands poised to roll out a traceability program by which consumers will know exactly where the fur in their garments comes from and how it is processed. This is in addition to the organization’s advertising campaign, “Natural Fur: The Responsible Choice,” which launched last year, targeting both the fashion industry and its consumers. Will that be enough to counter the efforts of anti-fur extremists?

Guy Groenewold of GFW (Groenewold Fur & Wool, Co.) isn’t sure, but what he does know is that real fur, and especially the 10 to 15 percent of fur that is caught in the wild, is far greener than not only fake fur but the majority of clothes on the market, which contain at least some petroleum-based plastic fibers. On the biodegradability factor, real fur begins returning to earth within months while fake fur is estimated to take up to 1,000 years to decompose. On the matter of tanning and chemical treatments to slow real fur’s decomposition, the industry already improved such processes and continues to do so. Yes, whether farmed, hunted or trapped, an animal dies so that we can use its skin, but Groenewold reiterates that, true to sound hunting ethics, every part of an animal—even furbearers—harvested in the wild is utilized. And, of course, nothing feels as good, works as well or has less impact on the environment as wild fur. 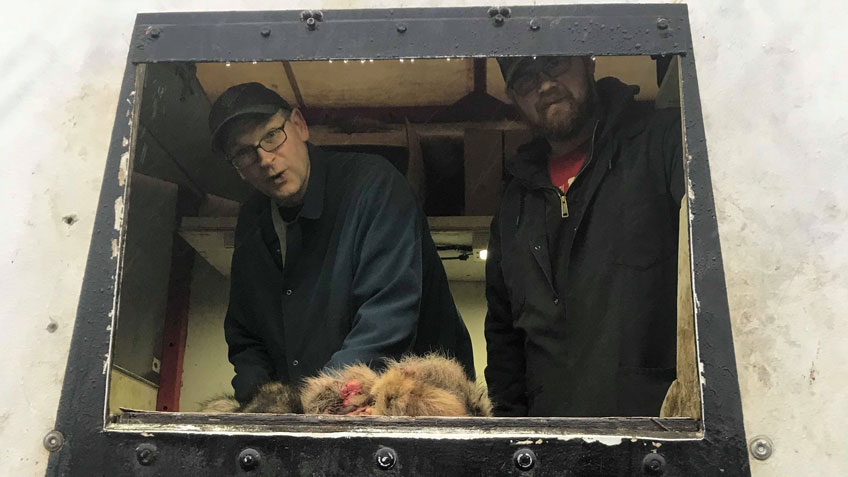 A furtaker will hand his pelts through the window of the GFW truck. The buyers will grade the skins and offer a price based on what is happening in the market for that species' fur at that time. (Image by Curt Green.)

Groenewold is a wild-fur trader. His perspective is unique. On the one hand, he’s often traveling the globe, visiting with manufacturers and building relationships within the industry. Back in the United States, he’s on the verge of adding more trucks to cover an even wider swathe of the predator-hunting and -trapping U.S. When he’s not jet-setting, he’s hunting whitetail or riding in the GFW trucks to meet face-to-face with the men—and occasional women—who hunt coyotes, say, or trap beaver and raccoon.

He treasures the relationships he’s forged with individuals—characters, if you will—who often live lives at the opposite spectrum of his. He recalls a deep bond he shared with an old-time off-gridder. They showed each other nothing but respect and Groenewold continues to mourn the loss of his friend whose sole concession to his remote location and the modern world was the private plane in which he lost his life.

Groenewold knows that every pelt he handles represents years of experience and countless hours of work. He remembers one time when it was so busy at a particular stop that he wasn’t even talking to people. He just assessed pelt after pelt, grading for size, color and condition, and offering to purchase at said price—or not. He was so afraid of making people wait hours to do business with him that he forgot about how he came across. He remembers two men who approached with skins that had been rubbed bare, which can occur naturally depending on when in the season the animals are harvested. He handed the pelts back, declaring them worthless, which was true. The moment haunts him, though, because he wishes he could do it over, and take a moment to explain why. Every pelt represents so much work, and Groenewold never, ever wants to be dismissive of that investment of self. 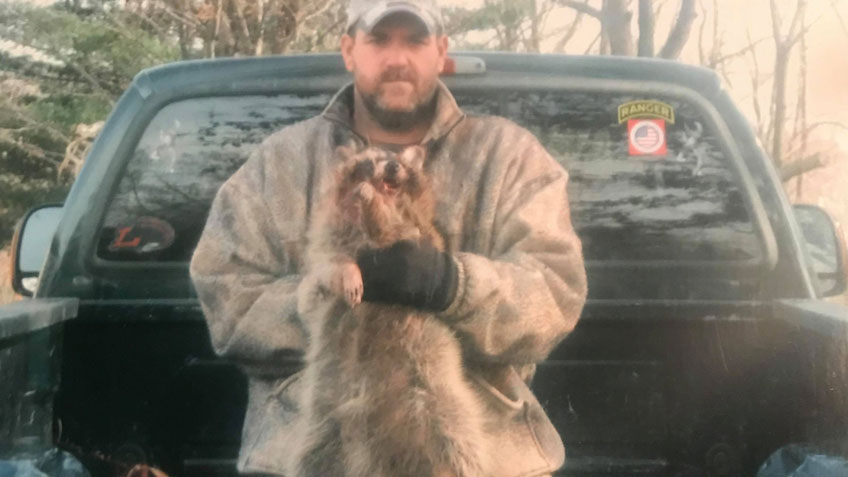 A reasonably priced alternative to a coyote-lined or -trimmed jacket would be one made with raccoon. GFW offers one through its website for $200. A coyote-trimmed coat can run over $1000. Hunter-trapper Curt Green took this raccoon in Illinois, where the species' population has exploded, causing public health and property concerns. (Image courtesy of Curt Green.)

And preparing a pelt is a craft that takes skill and attention to detail, in addition to a lifetime of predator hunting and trapping experience. Curt Green of Illinois is a former U.S. Army Ranger, welder and lifelong hunter, fisherman and trapper. Over the years he has sold hundreds of pelts to Groenewold. Some guys sell whole animals and receive lesser pay for not skinning the animals. Others will pay to have their skins fleshed, dried and sent to auction. Those pelts are coded and when they sell, the hunter-trapper is paid according to market pricing. As a commodity, the price of fur fluctuates daily in accordance with industry supply and demand.

What Green and the majority of sellers do is skin the animals, roll the skins and freeze them. It used to be that once the season ended in Illinois, one could not be in possession of such “green” pelts, but the law has changed and now Green holds onto his skins until he thinks he can negotiate a good price. About three days before Groenewold’s truck is due to roll up, Green will partially thaw the skins without heat, stretch them and comb them, paying close attention to any burrs. He strives to take animals whenever in the season it is that they are at their prime. It makes a difference in how luxurious the pelt is and, in turn, how much he’s paid for them.

Anti-fur fanatics think the solution to the debate is simple: Don’t use natural fur or fake fur. But the reality is far more primal. A girl slips her hands into a velvety rabbit handwarmer. She remembers how glamourous her mother looked in a beaver Cossack pillbox. She wears deerskin moccasins made in the Mi’kmaq tradition and pheasant feather earrings made by Wampanoags. Entwined in her DNA is the ancient knowledge that God made animals for mankind’s prudent use. Hunting ethics dictate that every part of any animal taken be utilized honorably. So, Groenewold processes whole animals for feed meal, Green makes meals and gifts from various parts of his harvests, and the girl-turned-woman sees nothing more right and natural than longing for her next bit of real fur, perhaps in this year’s latest trend of fur-lined parkas.

Editor’s Note: Though articles on the fur industry typically are not featured on NRAHLF.org, an occasional update on this topic is worth a read as animal rights extremists work to shut down fur-wearing, meat-eating and pet ownership as well as all types of hunting. All hunters must work to support all types of legal, regulated hunting.