Wild pigs are on a never-ending tear. As the NRA Hunters’ Leadership Forum website has reported over the years, they’re a detriment to other wildlife, they’re tearing up farms and ranches and moving into suburban areas and even anti-hunting media outlets praise hunting as part of the solution.

State and federal wildlife agencies, as well as university research groups, continue to address feral hog population management in the United States. The situation may differ slightly in different regions where wild hogs are abundant, but all states share the same basic problem and the need to formulate and implement effective population management strategies. Let’s look at the situation in South Carolina as an example.

The Problem
It’s arrogant to assume that today’s feral hog population problem in the United States was created by man alone, with feral hogs being the sole victims. But that’s just what the People for the Ethical Treatment of Animals (PETA) did in a July 12, 2011 article titled “’Refuges’ No Sanctuary for Feral Pigs.”  Such interpretations exhibit an inability to understand the interaction of man and nature, and ignore the context of the times in which events occurred.

Early explorers introduced (now feral) hogs to the New World based on sound reasoning. They needed sources of food to bring with them on their explorations. There is no doubt that domesticated animals that escaped or were turned loose impacted the feral hog population increase, but it is hardly a situation where man should be shamed for his survivalist actions.

PETA’s relocation-and-fenced-refuge solution is so ridiculously expensive, land-consuming and downright dangerous that the organization has essentially remained mum on the situation since then. 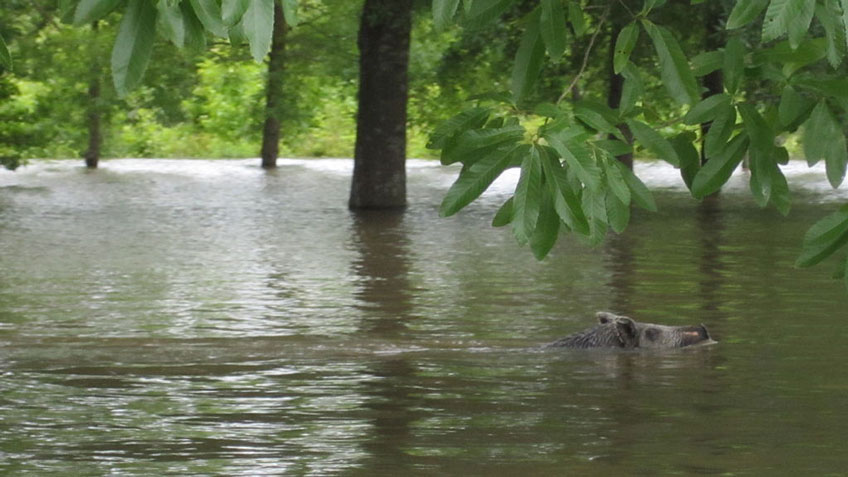 The Genesis
Although there is a physical difference between the wild hog and feral hog in ancestry, size and aggressiveness, we’ll call them feral hogs. They were introduced to coastal South Carolina by early Spanish explorers in the 16th century with a historic range of the coastal plains of the Palmetto State.  According to the South Carolina Department of Natural Resources (DNR) website, primary migration patterns of feral hog populations were restricted by the major river systems in that part of the state.

By the early part of the 20th century, Eurasian wild hogs were being introduced to the more northern areas of the state with its rolling hills and varied habitats of open, grassy fields and semi-deciduous forests. The wild hogs eventually spread out to the Blue Ridge Mountains in North Carolina.

The Population Explosion
According to the DNR, by the 1980s wild hogs were found in 26 counties, having maintained their approximate historic range. But by 2008, feral hogs were found in all 46 counties of the state due to expanding migration patterns forced by habitat pressure from the increasing population and a lack of natural predators. It should be acknowledged that there was some human relocation of animals into the Piedmont area. Breeding of wild hogs with domesticated pigs, escaped or released, pushed the estimated population in South Carolina in 2019, according to the South Carolina Wild Hog Task Force (SCWHTF), a state and federal interagency task force at Clemson University Cooperative Extension, to an estimated 138,000 to 150,000 hogs.

The Economic and Ecological Impact
Feral hogs cause $1.5 billion in agricultural damage annually throughout the United States with annual estimated losses in South Carolina of $45 million, according to a white paper, or authoritative report, entitled “South Carolina’s Growing Wild Hog Problem: Recommendations for Management Control,” presented by the SCWHTF.

As reported in the white paper, economic and ecological damage includes, but is not limited to, the consuming and trampling of hay, corn, peanuts, small grains, vegetables, watermelon, soybeans, cotton and other crops. Feral hogs cause the ruination of pasture lands by digging and rooting for food with a resulting increase in soil compaction and erosion and decreased water quality (primarily in wetland areas). The impact of feral hog activity extends as well to livestock and wildlife on which they prey: lambs, goats, newborn cattle, poultry and exotic game.

Feral hogs have had a most notable impact due to “depredation of threatened loggerhead sea turtle nests on North Island, Winyah Bay, S.C.” according to the DNR.

In addition, feral hogs carry diseases dangerous to humans, domestic livestock and wildlife: pseudorabies, swine brucellosis, African swine fever, circovirus influenza virus, trichinosis, toxoplasmosis and PRRS (porcine reproductive and respiratory syndrome), which causes reproductive failure in sows and respiratory disease in young and elderly hogs. The cost of PRRS to the domestic agricultural community is over $650 million annually. They also carry classic swine fever and foot-and-mouth disease, both of which had essentially been eradicated from domestic livestock.

Management and Control
Nobody is touting these feral-hog-related problems as a wildlife Armageddon, but they constitute serious concerns that cannot be overlooked and cannot be resolved by sport hunting alone.

Further citing the white paper “South Carolina’s Growing Wild Hog Problem: Recommendations for Management Control,” “The solution to the wild hog problem in South Carolina is not readily apparent. … Lethal removal in the form of sport hunting does not remove enough animals from the population to serve as an effective control technique.” The paper further states that to stabilize or reduce a wild hog population, approximately 50 to 75 percent of the population needs to be removed annually, with sport hunting eliminating only 20 to 30 percent annually.

As such, while sport hunting may eliminate less than is needed to control the feral hog population, simple arithmetic supports that, aside from attrition by disease, in-fighting and aging, sport hunting accounts for a sizable portion of annual population control. This is especially true when one considers that other control tactics, tried or under review, are ineffective or cost-prohibitive. They include: 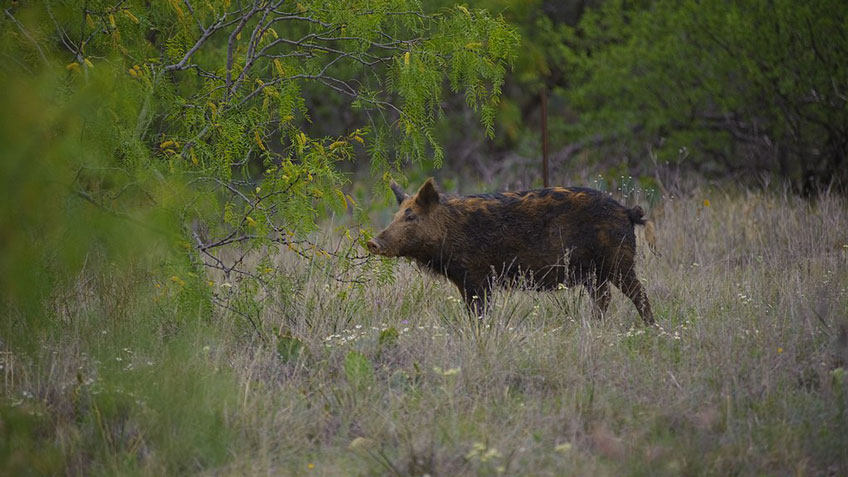 Whole Hog Attacks
It is important to note that successful feral hog population control will not fully address concerns of disease spread and economic and ecological damage. Nor, as noted on the website “Backcountry Attitudes,” will it address the increasing threat against hikers and others who enjoy the outdoors.

The Conclusion
While sport hunting is currently the most effective method of feral hog population control, even with the open season in South Carolina, only an increase in hunters—and successful hunts—will improve the control percentage of sport hunting. It is basic arithmetic that eliminating or reducing sport hunting of feral hogs would do more harm than good in ongoing efforts to control population and reduce damage.

With no other cost-effective method currently available for feral hog population management, some researchers are trying to focus on a measured and controlled sterilization of feral hogs through a feed delivery system in the wild, as dictated by observed feral hog population centers. Combined with the effectiveness of sport hunting, it may be the most effective and humane method of control and management of feral hogs not just in South Carolina but across the country.

Only through continued cooperative efforts on the part of state and federal agencies, university research organizations and hunter-backed wildlife conservation organizations can a comprehensive and mutually acceptable management strategy be formulated and implemented for a balanced coexistence of humans and feral hogs.

About the Author: James Thomas Werther resides in South Carolina with his wife, Becky, two cats and black lab, “Iris the Virus.” He is enjoying retirement after a career in the commercial credit and mortgage business. He works part-time and narrates books in print for those who enjoy audible books. He is a retired hunter who enjoys visits to the local shooting ranges, preferably with his sons.