How long will it be before the last elk is eaten by a predator in Yellowstone National Park (YNP)? I’ve written about the devastating effect of Canadian gray wolves being reintroduced into YNP, which have taken their toll. I’ve also written about how in 2018 hunting seasons for thriving delisted grizzly bear populations in the three states surrounding YNP (Montana, Wyoming and Idaho) were shut down when a federal judge caved to animal rights extremists, despite that wildlife biologists said the recovered species exceeds carrying capacity and should be removed from Endangered Species Act (ESA) protections. Now elk and bison that have figured out how to survive a wolf attack by escaping into the Yellowstone River are discovering too late that the tactic won’t work with a big grizzly.

On Sept. 18, BE Judson of Cody, Wyo., captured unbelievable footage of a grizzly bear pursuing and taking down a mature, 6-point bull elk in the Yellowstone River. (To see the YouTube video, click here.) As I watched the video, it was obvious the bear was well versed in taking down large prey animals by running them into the river, putting its weight on them while biting at their spine and drowning them. The bear got behind the bull’s head and used its upper body weight to keep pressing the bull below the surface to the sounds of a YNP official’s amplified voice in the background urging the tourist crowd to “stay in your car and keep traffic moving.” While the struggle was over in minutes, Judson told Montana’s Billings Gazette that the bear spent the next half hour dragging the 600-plus-pound bull to the opposite shore. Edited down to five minutes, the video captured the sheer power of an adult grizzly and Mother Nature’s epic battle to survive.

Though it appeared the bull may have outweighed the bear, the bear’s strength quickly overwhelmed it, showing just how efficient these big bears are at taking down some of the largest animals in the park. For those of you who still believe that large predators prey on the sick and old animals, this is a great example of how a mature bull elk in his prime can be killed in short order by a big grizzly, and we’ve seen the same effect on dry land with a pack of wolves. 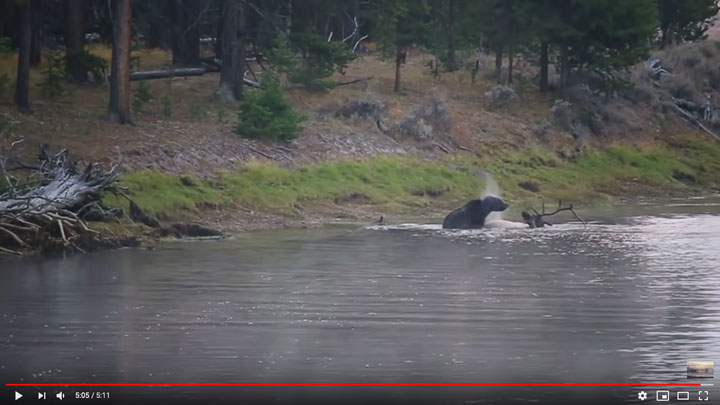 The fact is wolves and grizzlies are going to eat. This only becomes a wildlife management problem (and poses a danger to humans) if their numbers are left unchecked. If the prey animals eventually disappear, predators will eat each other. In fact, the Billings Gazette article shared it is suspected that the same bear that took down this bull elk was seen eating a smaller male grizzly in the spring.

The incident marked the second time this year that a grizzly was seen killing a large prey animal in YNP. As the article noted, “One other statistic that seems pertinent to the two sightings of grizzlies bringing down large prey animals this year is that there were 109 sightings of grizzlies feeding on bison and elk carcasses in 2019. That was considerably higher than the 76 sightings in 2018. Seventy-six sightings a year is also the long-term average since 1983.” (This is an amazing statistic considering the park’s booming elk populations reportedly began declining in 1994, the year before wolves were released into YNP and before grizzly bears recovered.)

Commenting on her now famous video, Judson told reporters it attracted more than 800,000 views in the first week. The night before that encounter, she said she captured footage of wolves in the park feeding on a carcass.

But for those who enjoy nature programming, the story gets even more amazing. According to a Newsweek article posted Tuesday, park visitor Dave Angelescu got his own YouTube video showing the grizzly bear fending off another grizzly to protect his kill, saying, “National Geographic, eat your heart out.” More than 30,000 views later, the video is a reminder to all outdoor recreationalists to remain alert in grizzly bear country. If bears are known for anything, it’s guarding their kills and, in the case of a sow, her cubs.

Hunters Beware: Not All of Us Emerge Unscathed
The Newsweek article and sources such as the Big Horn Radio Network noted that while Angelescu watched the brawl from a safe distance, two Wyoming bowhunters did not fare as well. On Thursday, Sept. 24, an elk hunter in the Teton Wilderness was attacked by a grizzly and airlifted to a local hospital. Two days later on Sept. 26, a bowhunter was charged by a grizzly bear on Rattlesnake Mountain in Cody and killed it in self-defense. The U.S. Fish and Wildlife Service (USFWS) and the Wyoming Game and Fish Department are investigating both encounters, partly as grizzly bears remain listed as a “threatened” species under the ESA.

Threats to humans posed by grizzly bears hit home for me personally in the fall of 2018 when Facebook friend Bob Legasa was attacked by a grizzly while bowhunting in Montana. Ironically, the incident followed the September 2018 decision by the judge I mentioned earlier when Federal U.S. District Judge Dana Christensen sided with animal rights extremists and overturned the USFWS’ decision to delist the bears. Once again, the emotion-based actions of animal rights extremists delivered devastating consequences.

Grizzly Bear Delisting: A Walk down Memory Lane
For those who question grizzly bears’ ongoing ESA protections, here are the facts. First listed as threatened in 1975, the recovered bears were removed from ESA protections by federal officials in 2007. Instead of promoting recovery as an achievement in wildlife conservation, animal rights extremist groups filed suit to keep the bears’ delisting tangled up in court. In 2017, the Trump administration’s then-Secretary of the Interior Ryan Zinke circled back to the issue and announced the recovered bears were “one of America’s great conservation successes, culminating decades of hard work.” So, Wyoming, Montana and Idaho were authorized to proceed with plans for grizzly bear population management. Once again came lawsuits from extremist groups that the National Rifle Association and Safari Club International defended against to prevent basing wildlife management decisions on emotion rather than scientific evidence documenting the role of legal, regulated—and sustainable—hunting. (A case in point, by the way, is the delisting of Wyoming wolves as news reports for the past two years running document how the state’s wolf populations are thriving despite no federal ESA protections.)

It amazes me that non-expert judges can shut down hunting opportunities on a predator that is overpopulated rather than endangered. The trickle-down effect includes federal scientists and hunter-conservationists now pointing to an additional safety problem regarding grizzly bears. As I’ve reported previously, reports in June 2019 cited new government data documenting that grizzly bear populations had expanded their range by 1,500 square miles over just the past two years. They now inhabit nearly 27,000 square miles, a range that has grown 34 percent in the past decade to the point they now venture onto private lands and prey on ranchers’ livestock. The result: more human-bear encounters as reported by sources including the Washington Post.

As a part of nature, we hunters understand more than most that the predator-prey relationship is a struggle for existence. Judson’s remarkable video inspires awe of Mother Nature and is the epitome of the ongoing battle to survive as we hunter-conservationists work to maintain a balance when it comes to our natural wildlife resources so all species can thrive. For hunters, this struggle means addressing the “cancel culture” movement of animal rights extremists who personify wildlife and shame and ridicule us on social media. While the forces of nature can be nurturing and caring as a sow looks after her cubs, when the dinner bell rings, a predator, too, must eat. This is why the NRA Hunters’ Leadership Forum website continues to bring to light the issues regarding the cultural, political and demographic challenges facing the future of hunting and hunters’ role in wildlife conservation.

About the Author
NRA Life member, award-winning outdoor TV host and recreational real estate associate broker Phil Phillips has hunted five continents, taking more than 200 big-game animals and nearly 60 species worldwide. Prior to hosting hunting programs, he started Colorado's first Ranching for Wildlife Program for antelope, which he ran for 15 years. Working alongside professional land managers to restore wildlife and protect habitat, Phil went on to guide clients to 500-plus big-game animals that have qualified for the record book. In 1992 Safari Club International honored him as the North American Bowhunting Outfitter of the Year. Phillips writes regularly about hunting and predator issues, particularly those impacting his home state of Colorado. You can email him at [email protected]