The hunting community knows Donald Trump Jr.—not just because he is a son of America’s freedom fighter and U.S. President Donald J. Trump, but because he is one of us. He speaks from the heart and we are blessed that he is a gifted communicator who effectively articulates the truth about hunters and hunting at a time when we need it most. So it was no surprise that so many NRA and SCI members flooded the Reno-Sparks Convention Center in Reno, Nev., last night at the SCI Convention to hear him share personal stories about why he hunts and pledge his commitment to preserving our all-American hunting traditions.

Ever outspoken in standing up for hunters, Trump Jr. understands we are under constant attack by those who do not understand hunting or its role in wildlife conservation. But, he pointed to the even bigger picture as covered in his newly-released book, “Triggered: How the Left Thrives on Hate and Wants to Silence Us,” exposing the tricks liberal extremists use to smear conservatives and push them out of the public square and proving that going on offense is the best defense. 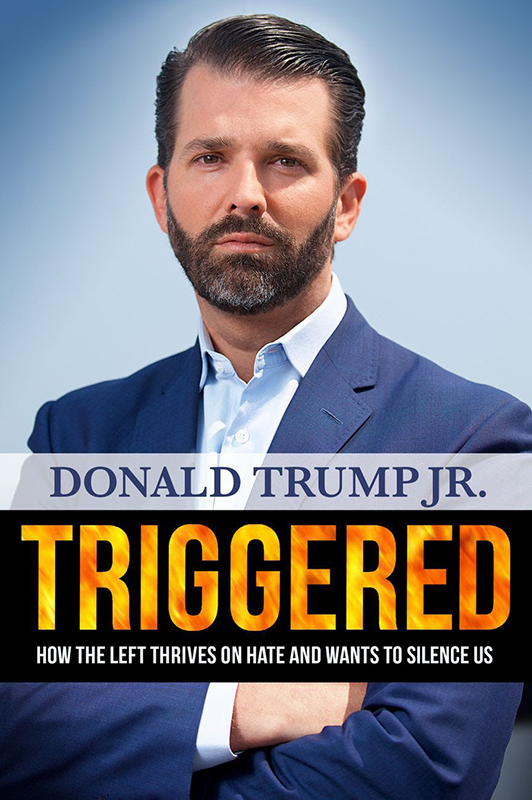 All you have to do is click on the book-cover image and either read Donald Trump Jr.'s introduction to his book "Triggered, How the Left Thrives on Hate and Wants to Silence Us" or listen to the audio clip. You are guaranteed to laugh out loud. The jokes come easily, but the topic is serious, and the book is a must-read for hunters.

“Can you imagine being in the room when the New York Times (NYT) said, ‘We have to give Donald Trump Jr. No. 1 on the best-seller list?’” he asked. He said the NYT countered, saying the Republican National Committee had purchased books in bulk, raising sales, but that only accounted for 4,000 copies. “If you subtract that 4,000 in bulk sales, that brings me to 68,000 books,” he said. “So I asked what was book No. 2 that week—28,000. I still sold over two times that amount.” So is Trump Jr. just better at math, or was this yet another example of the extent to which those who stand against freedom will go?

Addressing the general onslaught of liberal-extremist media and animal rights extremists, he honed in on the fight being waged against hunters, underscoring how those who seek to shut down hunting ignore the facts rather than try to understand why we hunt or hunting’s role in wildlife conservation. As for those who lie and tell us that legal, regulated hunting will cause a species to become endangered, he said, “With no hunting, that species would not be endangered; it would be extinct.” He acknowledged, “Facts are the leftists’ kryptonite. Outrange is a powerful motivator. ... This is why we have to be engaged.”

Trump Jr. recalled when the photos of him hunting in Africa first surfaced years ago and, right on cue, animal rights extremists began persecuting him. “I realized I must have the Trump gene,” he said. Refusing to back down from the truth, he told the media, “Here are the facts. Here’s what it means to be a conservationist.” Of course, any retractions regarding lies about his character or acknowledgment that he actually was participating in a legal, regulated activity always came on the back page at 2 a.m.—“not the same as being on the front page,” he said.

As the son of a billionaire from New York City, he calls himself an “unlikely hunter,” giving credit for his outdoor exposure to his maternal grandfather, who he spent childhood summers with in communist Czechoslovakia. He also credits him for instilling the importance of being aware of his blessings, particularly after seeing how people in other parts of the world live—without freedom, standing in soup lines. But while his grandfather taught him woodsmanship and camp craft, there were restrictions on who could hunt so it wasn’t until he attended boarding school in Pennsylvania that a mentor introduced him to hunting.

From experience, Trump Jr. talked about the need to reach other kids who might not otherwise be exposed to hunting; to expand public access to hunting lands, a point U.S. Fish and Wildlife Service Aurelia Skipwith made when addressing the crowd minutes before him; and to get women into hunting. Recalling what Susan Hayes said in her speech that evening when presented with the SCI Diana Award sponsored by the NRA Women’s Leadership Forum and promoting the need to get more women and families into the sport, he said. “If you get Momma Bear into the game, Baby Bear is getting into the game, too.”

Trump Jr. doesn’t just talk the talk; he walks the walk. He takes his young son hunting and encourages other hunters to expose their kids. “Let them sink or swim,” he said. “If we let our children rise to the occasion, they will.”

Thanking the crowd for its incredible outpouring of support, he kicked off SCI’s evening fundraising auction asking, “How can we put some gas in the tank for this cause?” Appropriately, he introduced auction item No. 1: a seven-day hunt in Alaska for sitka deer with him and his son with funds going to the SCI Foundation's Sables in the name of education. Alaska Gov. Mike Dunleavy joined Trump on stage promoting the “spectacular opportunity for an adventure of a lifetime.” The hunt went for $190,000. The crowd was so enthusiastic that a second slot was offered on the spot and went for $150,000, totaling a whopping $340,000 for item No. 1 alone. Even better: Hunting industry companies stepped up to offer a package of bonus products for each young hunter on that trip, including Remington, Kuiu, Leupold and Barnes.

“This is American hunting, and it shows the desire in our industry to pass on our hunting tradition,” said Trump Jr. “Tonight is not just about the hunt. Everyone is here today because of mentorship.”

Watching the dynamic and driven Donald Trump Jr. celebrate our freedom to hunt, I thought of how he really is one of us as he rallied the troops. I will always remember him acknowledging what a great honor it was to join us—“my friends”—who he posed for countless selfies with on the show floor. Referring to hunting as “the great equalizer,” he is right: We hunters are all the same. And we are blessed to call Donald Trump, Jr., our friend.