Wherever you find gray wolves you’re going to find controversy, even when those wolves are inside the boundaries of a national park. In this case, that park is Isle Royale National Park, which is largely isolated by the cold, expansive waters of Lake Superior, approximately 15 miles off the north shore of Minnesota. Not surprisingly, it’s also one of the least visited parks in the system.

The controversial decision to reintroduce wolves to Isle Royale arose as the wolves already present on the island dwindled, and researchers suggested that human intervention would be required to maintain a viable wolf population there. Wolves, the researchers on the island maintain, are necessary to balance the growing population of moose, which also exist there. Those opposed to bringing in more wolves suggested that it wasn’t our place to prevent the natural extirpation of the apex predators on Isle Royale.

But the truly controversial component of the situation resulted from the fact that there is no historical record of wolves existing on Isle Royale until shortly after World War II. It’s believed that the first wolves crossed an ice bridge that formed between the island and the Minnesota mainland in the winter of 1949-50, allowing an unknown number of wolves to cross to the island, where moose already existed in substantial numbers.

After a lengthy debate, the National Park Service decided that human intervention was indeed warranted. As reported on this website last summer, in 2018 and 2019 wolves from Minnesota, Ontario, and the Upper Peninsula of Michigan were released on Isle Royale to allow for the continuation of the longest wolf-prey study in the world. 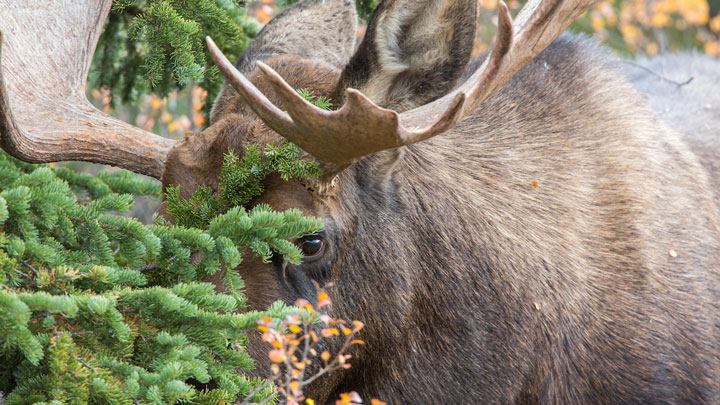 Moose were native to the Isle Royale National Park, but is theorized that gray wolves only entered the area after following an ice bridge in the winter of 1949-50. (Image by Keith R. Crowley, CrowleyImages.com.)

Begun in 1958, the study has focused specifically on the relationship between gray wolves (Canis lupus) and moose (Alces alces). Because of the isolated nature of the island ecosystem, it is an ideal laboratory for wildlife biologists to track the predator-prey interaction. Isle Royale is roughly 45 miles long and 9 miles wide, which makes it just big enough to support both moose and wolves, and just small enough for biologists to keep track of both species.

Wolf and moose numbers have each independently fluctuated during the decades of the study. Wolves have ranged in number from 12 to 50, and the moose from 450 to 2,400. Those numbers have fluctuated widely due to a variety of factors, with weather and disease affecting both wolves and moose populations particularly.

By the end of 2015, only two wolves remained on Isle Royale, a male and a female, and both showed signs of severe inbreeding. Since they were closely related, their ability to produce viable offspring was doubtful and that was when the National Park Service decided to intervene by adding new wolves to the island.

The wolves brought back to the island last year soon killed the "native" male wolf. The existing female wolf has also disappeared and Isle Royale biologist Rolf Peterson, and his associate John Vucetich, will make finding this female a priority during the annual winter survey of wolf and moose populations, which is underway now.

Additionally, at least one of the transplanted “new” wolves, a female, has also been killed by the other introduced wolves on the island. This comes as no surprise to the biologists since it’s well-known that the number one cause of death for wild wolves in North America is wolf-on-wolf violence as packs and individuals compete for territory, prey and breeding rights. 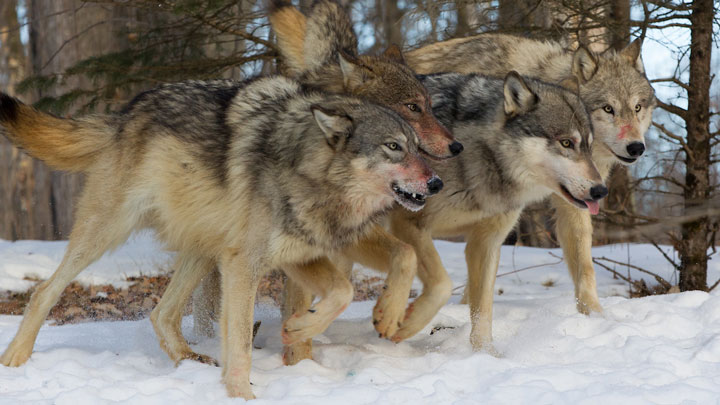 Isle Royale acts as an ideal laboratory for wildlife biologists. The area is geographically isolated, large enough for moose and wolves to coexists, but small enough that scientists can monitor the situation closely. (Image by Keith R. Crowley, CrowleyImages.com.)

Single wolves in the process of dispersing from their natal packs are at the highest risk for succumbing to other wolves, and until they either join another pack or form a new one with another dispersing wolf, they remain especially vulnerable. Even then, wolf biologists in Yellowstone National Park have determined that the size of the pack and, even more importantly, the age of the individual members has a good deal to do with the survival of the pack during inter-pack conflict.

In short, the bigger the pack and older the members, the better chance they have of dominating and defeating rival packs. This means that the odds are severely stacked against young, lone wolves in the process of dispersing. Right now, all the wolves on Isle Royale are attempting to establish a viable social system.

Unlike past years of the Isle Royale wolf-moose study, all 15 of the recently transplanted wolves currently wear radio telemetry tracking collars, as do 20 of the 2060 moose on the island. This allows Peterson and Vucetich to keep closer track of the interaction between species.

The seven female and eight male wolves are traveling in loose associations, but none of the wolves have formed a pack by scientific standards (which requires a mating pair and the birth of pups). However, according to the project’s social media accounts, “…there may be an official pack of wolves forming amongst the group. It consists of two males and one female. These wolves are traveling together and defending their territory. In the spring we will see if they reproduce together. Then they will officially be a pack!” 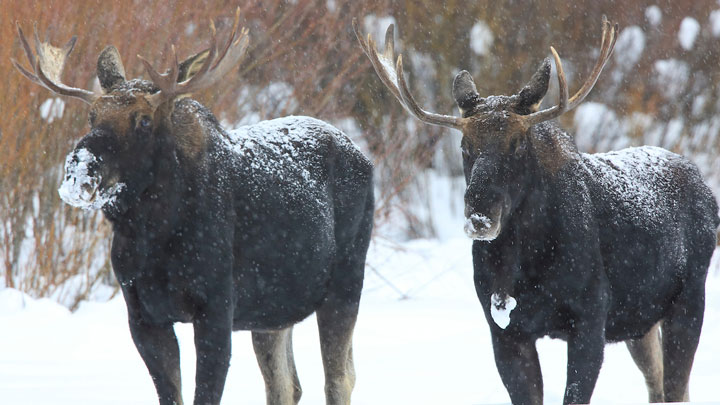 One of the intriguing questions biologists hope to be able to answer in the wolf-moose study taking place at Isle Royale National Park is why the size of moose skulls have shrunk 16 percent over the last 40 years. (Image by Keith R. Crowley, CrowleyImages.com.)

Ultimately, scientists hope to use the information gathered to better understand both the predator-prey relationship and the overall effect of that relationship on both species. For example, one recent study shows that the size of moose skulls on Isle Royale has shrunk 16 percent over the past 40 years. The exact reason for this change is unknown and answering questions like these is the purpose of the project.

For anyone interested in following the story further, the Wolves and Moose of Isle Royale website provides periodic updates and a detailed annual report each year following their winter survey of the island, which is occurring now. The site also provides a concise history of the project during its 62-year run.

About the Author
Keith R. Crowley is an award-winning writer and photographer and the author of three books on the outdoors: “Gordon MacQuarrie: The Story of an Old Duck Hunter,” (2003), “Wildlife in the Badlands,” (2015) and the newly released “Pheasant Dogs.” When he is not traveling in search of new stories and new images, you can find him at his home on a lake in northwest Wisconsin with his wife, Annette, and a collection of old dogs and old boats.