The NRA Hunters’ Leadership Forum (HLF) website—NRAHLF.org—is pleased to announce it has produced national award-winning content for the third consecutive year as the Professional Outdoor Media Association (POMA) recognized Phil Phillips with an award for Outstanding Achievement for his article “Antis Cry to Close Hunting as Grizzlies Expand Range” during its virtual business conference, Aug. 11-12. Sponsored by Mossy Oak and as of this year Duluth Pack, the annual “POMA Pinnacle Awards” honor outdoor journalists for remarkable achievement in traditional outdoor sports-focused communications including writing, art/photography and broadcasting as well as content specifically focused on wildlife conservation.

Published in June 2019, Phillips’ NRAHLF.org article tracked animal rights extremists’ efforts to prevent a grizzly bear hunting season in the Greater Yellowstone Ecosystem (GYE)—Wyoming, Montana and Idaho—despite that the wildlife agencies in the three states had documented that grizzly bears in the 22,500-mile GYE had long since recovered. Bear populations exceeded carrying capacity and legal, regulated hunting was deemed a necessary wildlife management tool. The article noted this was precisely why the U.S. Fish and Wildlife Service (USFWS) proposed removing grizzly bears from Endangered Species Act protections in 2007 and then again in 2016 when government data revealed the bears now inhabited nearly 27,000 square miles—a 34 percent increase in range over the previous decade. Instead of celebrating the species’ recovery marking a 41-year conservation success story, extremists again squelched the move in court and got the bears re-listed. According to Phillips, if extremists were turning a blind eye while humans were being mauled and killed by grizzly bears, no wonder the fact the bears were now wreaking havoc in ranching communities and attacking livestock was seemingly met with little concern. 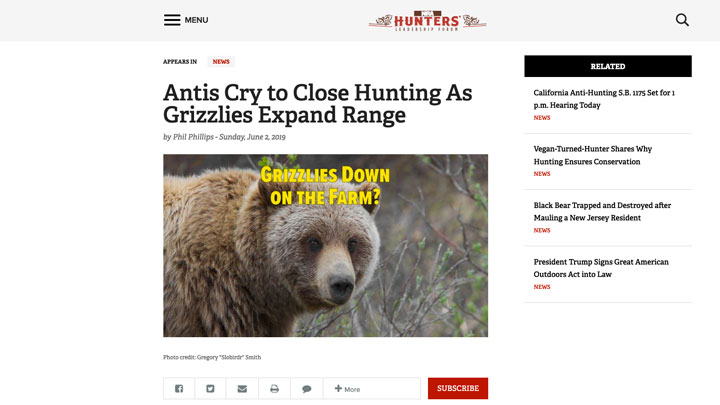 The award marks a POMA win for an NRAHLF.org for the third straight year and the second consecutive POMA award for Phillips in the Newspaper/Web category. Phillips was presented with a 2019 POMA award for an NRAHLF.org article that also addressed issues with grizzly bears after a grizzly mauled a Facebook friend while bowhunting for elk in Montana.

“I am honored to be recognized by POMA and my peers, particularly as there were hundreds of entries in the Magazine/Web category representing some of the best outdoor writing in the country,” said Phillips. A strong voice on the NRA HLF website on predator issues and in support of legal, regulated hunting as a science-based wildlife management tool, he added, “I hope that this article sheds light on the threats posed by grizzly bears when their populations are not managed.” Underscoring the role of the NRA HLF website, he added, “ Having POMA recognize NRA Hunters’ Leadership Forum material helps to get out the word that this site was created to deliver the news on hunting and wildlife conservation issues to keep hunters informed.”

As Director of Communications for the NRA Hunters’ Leadership Forum and the website’s founding editor, it’s a great feeling for me to say the award-winning site has walked away with a POMA award every year since it was eligible following its launch in 2016. The experience of our contributors reflects in the quality of their work as the site continues to inform on the issues while sharing the stories of hunters and hunting. What would happen to wildlife if there were no hunting—and what would happen to hunting if there were no NRA?

NRAHLF.org Congratulates 2020 POMA Winners
As Ralph Waldo Emerson said, “The reward of a thing well done is to have done it.” So warmest congratulations to all 2020 POMA Pinnacle Award winners on a job well done.

In scanning the above list of winners, please note that NRAHLF.org contributor and friend Keith Crowley swept POMA’s Art/Photography category. Though the two images have not yet been featured on NRAHLF.org, he has been an NRAHLF.org contributor since the site’s inception. Be sure to watch for his upcoming NRA HLF article sharing how the photography side of his outdoor career has made him a better hunter—whether hunting with a camera or firearm. 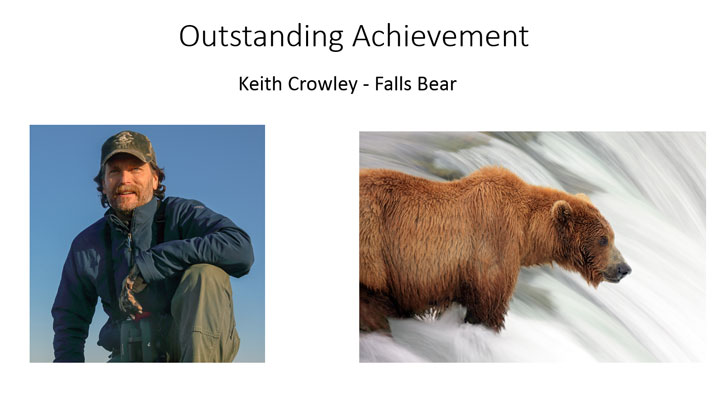 As for background on one other POMA award winner, Nick Hoffman certainly excelled in the Broadcast category with his “Nick’s Wild Ride” TV show episode. For an example of how small the world is and how the hunting and outdoor community is filled with people who enjoy hunting and working together, Hoffman and Phillips happen to go way back. Years ago while Hoffman was touring as country star Kenney Chesney’s fiddle player, he wrote, sang and played the theme song for Phillips’ “Phil Phillips Unleashed” TV show.

In closing, it is clear that for hunting to not just survive but thrive, we hunters, shooters, anglers and other outdoor enthusiasts are fortunate to be able to count on America’s talented outdoor writers, editors, photographers and video producers to promote our way of life and help us communicate why we hunt. In the meantime, it is up to every American hunter to do his or her part to reach out to those who have never been exposed to our way of life and tell our story.

About Mossy Oak
Launched in 1986, Mossy Oak has been a leading manufacturer of camouflage clothing designs for hunters and outdoorsmen for nearly 35 years. As part of the Haas Outdoors umbrella of companies headquartered in West Point, Miss., Mossy Oak remains committed to literally “having hunters’ backs” and is the maker of Overwatch, the official camouflage pattern of the NRA.

As for why Mossy Oak has sponsored the POMA Pinnacle Awards program since its inception, Mossy Oak founder and CEO Toxey Haas explains, “The outdoor media has always been a key part of what we do. We started our company with their help, and we've grown it with the same. They're our business partners as well as our friends.” Now that’s what one calls giving back.