I was sitting quietly with a good view through Central Texas scrub brush and woodland, quiet and still. I hear before seeing—a small, sharp noise of hoof striking stone. The brush parts and eyes peer right through me. Only time enough to whisper his name—Sus scrofa—as I squeezed the trigger on my Winchester.

Sus scrofa, the species descended from Eurasian wild boar, goes by many names—wild swine, hog or simply pig—and may be the No. 1 wildlife-related problem in the Lone Star State, placing him tops on the region’s “most wanted” posters. And while the Texas pig has no competition on his bad boy ranking, many also agree it is the state’s No. 1 big game hunting opportunity in a state boasting well-managed herds of whitetail deer and exotic species.

“Anyone who kills a wild pig in Texas is a friend of mine,” exclaims John M. Tomeček, Ph.D., an assistant professor and extension wildlife specialist for the Department of Rangeland, Wildlife and Fisheries Management at Texas A&M University. He and other biologists work as generals in this war enlisting landowners, trappers and hunters to contain rapidly growing pig populations.

Wild hogs, or pigs, are a mix of breeds, mostly from domestic stock. As this website reported, a United States Department of Agriculture survey conservatively estimated annual damage to agriculture in Texas alone at more than $150 million with an additional $7 million spent by landowners on attempts to control pigs. Research suggests the average pig causes $200 in damages annually, but the actual figure is likely higher. Field biologists estimate the state’s wild pig population in excess of 2.6 million, accounting for more than half of the feral pigs nationwide.

This is why hunters should use protective gloves and wash their hands especially after field-dressing a pig. Thankfully, thorough cooking of meat eliminates the potential for human infection with consumption.

Most other wildlife species don’t associate with wild pigs as they readily consume anything smaller or slower and destroy habitat. Whitetail deer quickly leave an area once pigs enter, according to Tomeček. Because pigs are considered pests in Texas, state game laws regarding fair chase do not apply. If you are a landowner or a designated landowner’s agent removing them by any legal means, then a hunting license is not required.

“Boarish” Behavior
The Texas pig problem is blamed on Spanish explorer Hernando de Soto. As the leader of the first European expedition into what is now the Southeastern United States in 1542, he brought European pigs with him. When he died, members of his expedition left. The pigs did not.

As Texas’ pig populations expanded, by the 1980s biologists were documenting an exponential growth rate. Fingers point at the indiscriminate stocking of pigs in new habitats and people not accounting for the fact these animals are extremely prolific. Sows have more than one litter per year and up to 10 piglets per litter. 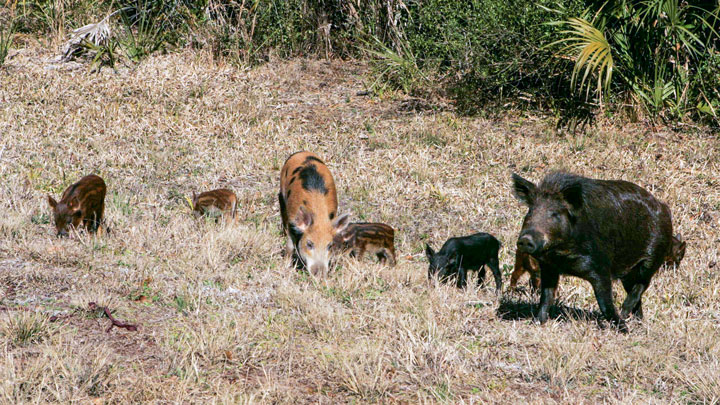 “Most biologists agree that a pig is more intelligent than a dog,” said Tomeček. “And they have the ability to teach their young and continually adapt to their environment, quickly changing their patterns to survive.”

As for their social structure, pigs bond together in groups called “sounders.” An older sow leads the group of younger pigs containing a mix of several generations, including males. They learn where threats come from and the best places for food and shelter. Wild boars weigh 200 pounds or more with jaws powerful enough to snap bone so they can consume entire animal carcasses. They pose a physical threat to humans as adult pigs can sprint 30 mph, jump a 3-foot fence and run through whatever is in their way—or stand and fight. Their tusks are formidable weapons as they swing their heads, often in range of one’s groin and femoral artery. Pigs kill a handful of people every year.

Rifle Options
Many hunters think they need a large, heavy-caliber rifle, but a typical deer rifle works fine. In fact, many hunters like me have taken pigs while hunting deer.

I’ve used an AR-15 equipped with night vision in .223, for example. I remember one night near Bay City, Texas, when I was with friends and an outfitter who had rights to hunt several properties experiencing pig problems. At one point, a large sounder was feeding in the middle of an open pasture, oblivious to our presence, and we immediately dropped seven of them.

Some helicopter services offer aerial hunting with special brass catchers that keep extracted, flying cases from damaging rotors. These hunts are effective but expensive. Generally, one can hunt Texas pigs inexpensively. Some landowners charge nothing, appreciative of hunters’ help.

Anticipating both close and longer-range shots, I prefer a scoped Ruger M77 or Ruger Scout in .308. In thick woods at close range, I prefer a lever action and iron sights for quick repeat shots. But the rifle I have shot more pigs with than any other is a Winchester 1894 with an aperture rear sight for quick reloads. It is light, fast and handy, which is why the company has made more than 7.5 million of this John Browning-design to date.

A second lever action rifle alternates with my ’94. It’s an 1895 Winchester, another Browning design, in 30-40 Krag. Texas Rangers of a century ago would have been proud as the state issued them the 1895 carbine.

Wading through heavy brush after what I presume to be a dead pig, I pack either a S&W Model 29 with 4-inch barrel or a Ruger New Model single action.

Wildwood Hog Hunting
Harvey Wood and his wife, Valerie, own Texas Wildwood Hog Hunts near Centerville, one of multiple outfitters you can contact to hunt pigs in the Lone Star State. Reflecting on their sixth year of operation, Harvey Wood explains, “Our business model is simple: Turn hogs into hunts and hunts into meat. And make it a hunt and environment where people want to return and bring friends and family.”

Hunters visit him and his 100-acre-plus fenced hunting area year-round from as far away as Germany and the Netherlands. Wildwood boasts a comfortable onsite cabin with a full kitchen and cable TV for hunters, an elaborate game skinning/quartering area with a walk-in cooler, and four-wheelers to transport hunters and hogs. Most hunters take the meat with them but when hunters cannot, Wood arranges for meat donations to area people in need and to homeless shelters in Houston.

“And, though the pig is a pest, he deserves great respect particularly for his intelligence and will to survive,” said Wood. “Shot placement is everything and I advise my hunters to shoot the head or wait for that broadside shot for the heart/lung area for a clean, ethical taking of the animal.”

Bringing Bacon Home
Even with Texas’ ample outfitter operations, hunting alone will not check the state’s rising pig population. However, with empty meat shelves in grocery stores creating a surge in new hunters during COVID-19, maybe we can hold our own at least in some areas.