"I think conservation is the message and I am glad that I am part of it."
—Mary Cabela, Founder, Cabela Family Foundation, in reflecting on the success of “Twelve Cheetahs” (9/17/21)

What does it mean to be on the front lines of wildlife conservation? For hunters, it starts with being exactly that—a hunter—as our licenses, excise taxes and other fees provide for the management of wildlife and its habitat. But amid new challenges to wildlife conservation in the 21st century, we are blessed by the entrepreneurial hunter-conservationists in our midst like the Cabela family and its Cabela Family Foundation (CFF) Cabela Family Foundation who are doing the heavy lifting—forging essential private/public partnerships to pursue strategies that are restoring wildlife populations and ecosystems around the globe. In 2018, the conservation world witnessed the remarkable success of the CFF’s “Twenty-four Lions” project, working with partners to transport and release 24 African lions into Mozambique’s Zambeze Delta. Now the CFF is back in the news, returning to the Zambeze Delta this time to release wild cheetahs. Not only does its “Twelve Cheetahs” project mark the second largest conservation transport of wild cheetahs across an international boundary in history, but it represents two years of research to restore the species to an ecosystem where it had not been present for 50 to 100 years.

“In the past century, the wild cheetah population declined from approximately 100,000 individuals to just around 6,700 globally and zero in the Zambeze Delta,” said Dan Cabela, director of Twelve Cheetahs and CFF executive director, who traveled to Mozambique to oversee the project alongside his mother, Mary, and other members of the Cabela family. “By reintroducing cheetahs to Coutada 11, we have potentially expanded the wild cheetah range by 30 percent. When you can reintroduce a species to an intact and vast ecosystem while also expanding the potential range of that species, it positively impacts wildlife conservation.”

As shared in the official CFF news release, the cheetah release began on Aug. 27 as the CFF—in conjunction with partners including the Ivan Carter Wildlife Alliance (ICWA), Zambeze Delta Conservation (ZDC), Endangered Wildlife Trust (EWT) and the National Administration for Conservation Areas (ANAC)—released the first six cheetahs into a remote region of a 4,500-square-kilometer Zambeze Delta area of Mozambique called Coutada 11. On Aug. 28, three more cheetahs were released, followed by two more on Aug. 29. Four females and seven males were released in total with one cheetah dying prior to transport.

According to Twelve Cheetahs scientist Willem Briers-Louw, the move will increase cheetah numbers to as many as 100 within 15 years. All cheetahs have tracking collars with GPS and VHF tracking devices to provide for monitoring by wildlife experts, including Briers-Louw and Mark Haldane, owner of Zambeze Delta Safaris, who with the ICWA’s Ivan Carter was also instrumental in the Twenty-four Lions project in 2018. Experts will monitor the cheetahs by helicopter so they can respond quickly in case of an emergency such as poaching or an injury. As of now, the cheetahs remain in their original groups, including two sibling groups, in Coutada 11’s “pan network,” a grassland area surrounded by forest that holds prey species cheetahs can hunt for food. 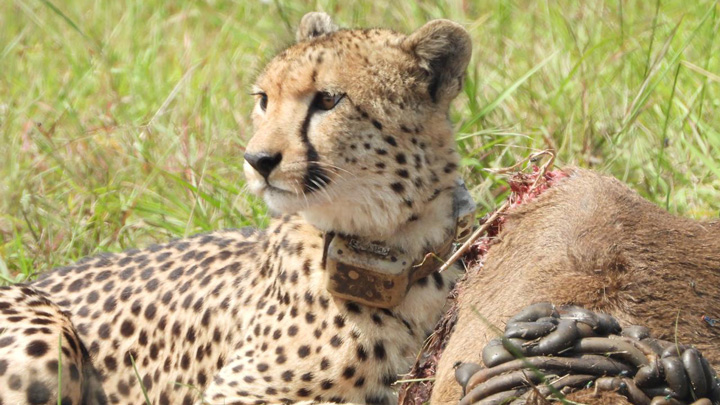 Cheetahs were chosen from game reserves in South Africa and Malawi to ensure genetic diversity. Upon arrival in Coutada 11, they were placed in a boma, or enclosure, to acclimate to their new environment through a “soft release.” In thinking through potential crises, because lions sometimes hunt cheetahs, the cheetah boma was located far from the lion range. Researchers selected cheetahs that had previously coexisted with lions and had spatial and temporal avoidance skills. The area’s large size, low lion density and ample prey species aids coexistence.

As reported by this NRA Hunters’ Leadership Forum (HLF) website in 2017, cheetah populations have dropped off dramatically over the past century and have been eliminated in nearly 30 countries. As far back as 2016, USA Today warned that, despite Endangered Species Act protections, the world’s fastest land animal could be sprinting toward extinction amid Africa’s increases in human population and illegal poaching.

Cheetahs are listed as Vulnerable on the International Union for Conservation of Nature (IUCN) Red List of Threatened Species. Until the Cabela family stepped in, the species was the only large carnivore historically found in Coutada 11 that was no longer present. As Dan Cabela noted, “This move completes the African large carnivore guild that naturally occurs in the area, which is important as only 8 percent of carnivore guilds in Africa are thought to be intact, adding substantial conservation value to the species and to the ecosystem.”

When talking with Mary Cabela, founder of the Cabela Family Foundation, about the Twenty-four Lions and Twelve Cheetahs projects, it is clear she is driven by a passion for wildlife. “Preserving our planet’s natural wildlife and their environments through conservation is incredibly meaningful to my entire family and especially my late husband, Dick Cabela” [co-founder of outdoor retail giant Cabela’s in 1961], she said. “To see how well the lions flourished, reproduced and settled into an area once completely void of the species gives me hope and excitement about reintroducing the cheetahs back to this very special place.”

The Backstory That Laid Groundwork for Success
It is important to note how far Mozambique has come to get to a point where projects such as the lion and cheetah reintroductions could succeed as African wildlife is under constant threat from poaching for bushmeat and the illegal trade of ivory. When the CFF partnered with Ivan Carter’s ICWA to release 24 lions into Mozambique’s Coutada 11 in 2018—representing the largest lion relocation in history—NRA HLF contributor Catherine Semcer, research fellow with the Property and Environment Research Center and lead researcher with the Wild Africa Initiative, specifically gave credit to Mark Haldane and here is why. The decades of civil war that wiped out much of Mozambique’s wild game populations particularly impacted the more remote areas where there was no way to monitor whether game animals were being sustainably used. Sable antelope, for example, only numbered 44 animals and Cape buffalo numbered only 1,200. Today their populations exceed 3,000 and 20,000, respectively, because Haldane worked with local communities and hunter-conservationists to build his hunting business while using some of the fees paid to him by hunters to launch an anti-poaching program involving area villages. Haldane provides the community with training and steady income through patrolling and aerial surveillance jobs that bolster both anti-poaching and ecotourism efforts.

“Since 2018, our anti-poaching unit (APU) has become more effective by using the integration of the Spatial Monitoring and Reporting Tool (SMART), a system that enables the collection, storage, communication and evaluation of data,” explained Mark Haldane, head of Zambeze Delta Safaris, who has been running Mozambique’s Coutada 11 hunting operation since 1994. “Information about poaching activity is immediately relayed to the research team,” which patrols the area to make sure animals are not caught in snares or traps and removes them. Bolstering wildlife conservation efforts, hunter-funded anti-poaching operations, in fact, went far in laying the groundwork for success of Twenty-Four Lions in 2018.

With private/public partnerships remaining critical across the board, the Twelve Cheetahs team also helped the community prepare for cheetah reintroduction. Coutada 11’s Chief Thozo conducted a ceremony and gave his blessing for the cheetahs while local school children and community members were invited to view the chetahs in the boma. The community was assured cheetahs are not a threat to people, especially as livestock is not kept in the village.

“Greater wildlife conservation success in this particular area will directly benefit the local communities through tourism,” explained Dan Cabela. “This is why the relationship between those involved with the Zambeze Delta Conservation efforts and the communities they support is so strong.”

Hope for the Future
As the NRA HLF website tracked in 2019, one year after the release of the 24 lions, their population had nearly doubled—and as of last month’s cheetah release, it had nearly tripled. So far, the cheetahs are on the right track, too. Experts report that all cheetahs are killing their own animals for food and are in great condition. The Cabela family has committed to funding cheetah research through at least 2022. 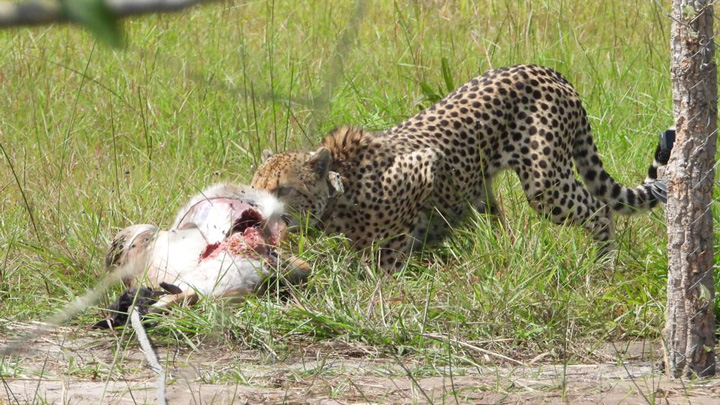 The vision of the Cabela family is being realized as wildlife and the local people of Mozambique’s Coutada 11 continue to receive the blessings that come from on-the-ground hunter-funded wildlife conservation. The Twelve Cheetahs team hopes the presence of both cat species will drive the environment closer to its original state.

“Many species of hoofed mammals have flourished to the incredible numbers the delta holds today,” said Dan Cabela. “The ecosystem is thriving more than ever, which is why the reintroduction of the cheetahs as an additional apex predator makes sense.”

As for Cabela family matriarch Mary Cabela, I’ve gained considerable insight into her strength of spirit and sense of adventure over the past few years. Who wouldn’t enjoy hearing stories from her time spent with the lions and cheetahs? For one riveting moment, I was most interested in her experience of riding on the jet with the lions to Mozambique and the thrill of realizing the tranquilized lion next to her was waking up. By the end of that Twenty-four Lions trip, she said there was already talk of returning cheetahs to Coutada 11. Mary, Dan and the rest of the Cabela family had found their next mission.

When it comes to selfless charitable acts and other good works that help our renewable wildlife resources and society as a whole, the Cabela family is the epitome of philanthropy. Think of all we could accomplish for wildlife conservation if we had more families like the Cabela family, its foundation and its generous partners.

Editor’s Note
A familiar face at NRA Hunters’ Leadership Forum events, Mary Cabela has received numerous awards in recognition of her quest to conserve wildlife and safeguard hunting and the shooting sports, including the 2001 Safari Club International Diana Award and the 2021 Dallas Safari Club Foundation Legacy Award. Most recently, she was presented with the 2021 NRA Women’s Leadership Forum (WLF) Lifetime Achievement Award at the WLF’s annual NRA Women’s Leadership Forum Luncheon and Auction in Fairfax, Va., on Sept. 3. “She is a foremost ambassador of our great American hunting and outdoor tradition, a true role model for conservation leadership and a passionate defender of our Second Amendment freedom,” said NRA EVP Wayne LaPierre. “Her leadership and love of the outdoors has touched countless lives—and continues to touch lives today.”—KMP

About the Cabela Family Foundation
The Cabela Family Foundation supports long-term partnerships that fulfill the foundation’s mission to create projects that promote conservation, access to wild spaces and charity toward others—the very definition of philanthropy. It carries forth the legacy of Dick and Mary Cabela, who founded the outdoor retailer Cabela’s in 1961 and expanded it to more than 80 stores before selling the company in 2016. The Cabela family and its partners encourage us all to follow the progress of the cheetahs and lions and support anti-poaching efforts in Mozambique. For more information on the foundation’s research and to view some of its lion and cheetah project videos, visit @CabelaFamilyFoundation on social media.

About the Cabela Family’s Partners in Wildlife Conservation