As visitors to the NRA Hunters Leadership Forum website (NRAHLF.org) know, the NRA works diligently to protect our rights as hunters and gun owners as NRAHLF.org strives to bring us the latest news on the hunting issues that are important to all of us. Despite being plagued by the ongoing pandemic and related closures and difficulties, 2021 saw us living up to those ideals once more. As the first month of the new year draws to a close, let’s take a look at some of the biggest stories we brought you in 2021.

The defeat of David Chipman, President Joe Biden’s ill-considered choice to head the Bureau of Alcohol, Tobacco, Firearms and Explosives (ATF), was one of the NRA’s biggest victories in 2021 and was important for all gun owners, hunters included. Despite the president standing by his man, opposition to Chipman by the NRA and law-abiding gun owners throughout the country finally forced Biden to withdraw the nomination in September, putting an end to the threat.

As Jason Ouimet, Executive Director of the NRA Institute for Legislative Action (NRA-ILA), put it: “This critical win is thanks to NRA members who flooded their senators’ offices with texts, emails, letters and phone calls voicing their opposition to Chipman’s nomination. Because of their swift action and ongoing opposition over the past several months, the radical gun control advocate will not sit at the helm of the ATF.”

The continued expansion of the NRA’s free online hunter education course was also important, with more states accepting the course as an alternative to their state-required hunter education courses. The latest state to accept the NRA’s free course was Kansas in October, bringing the total to 12 states that have approved the fun, safe, modern education option. Since the program launched in 2017, the NRA has provided nearly 75,000 students with online hunter education free of charge, helping to attract, recruit and support new hunters and shooters across the country. While the course is free, the value of the course for growing hunter ranks in the United States is invaluable.

In warning readers of the threats posed by animal rights extremist groups to the future of hunting and wildlife conservation, we brought you a synopsis of 10 key groups to monitor. As we explained, many of them go about their business somewhat stealthily, not making a big fuss to avoid drawing the attention of hunters and pro-hunting advocates. Meanwhile, they are busy engaging the non-hunting public in an all-out effort to end legal, regulated hunting. From the Humane Society of the United States to PETA, these groups won’t stop pushing to cripple hunting opportunities in the United States. Likewise, we won’t quit reporting about those efforts so mainstream American hunters know what they’re up against and how to respond.

And make no mistake: PETA remains a leader among anti-hunting groups, as NRAHLF.org chronicled in May when the group pushed for several dictionaries to do away with what it calls “speciesist slurs” in their definitions of certain animals. PETA wants people to believe that calling other people pigs, dogs or rats is a disservice and insult to the animals—not to the humans being insulted. Its entire effort against so-called “speciesism” is designed to make people believe rats and people are equal in every way. If they ever accomplish that, game species like deer, turkeys and even upland and migratory game birds are likely to follow suit. 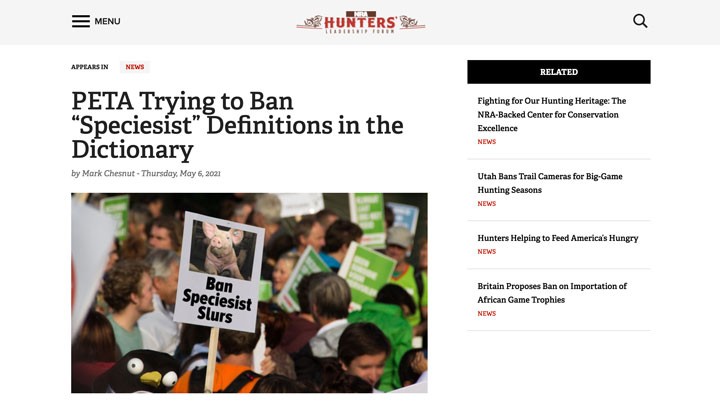 Coverage of the gray wolf management issue on both the state level such as in Wisconsin and on the federal level where animal rights extremists have launched a barrage of lawsuits was also significant in the 2021 editorial mix. In addition to reporting how the NRA and other groups are giving a voice to hunters in multiple federal-level lawsuits, material also covered the Biden administration’s response. First the administration said it was standing by President Donald Trump’s decision to lift Endangered Species Act (ESA) protections for the recovered species. But in September, it flip-flopped as Biden’s Department of the Interior (DOI), which oversees the U.S. Fish and Wildlife Service (USFWS), announced it will review the status of gray wolves in the Western states. In November, U.S. government attorneys and hunter-backed wildlife conservation groups, including the NRA and Safari Club International, asked a federal judge in Oakland, Calif., to uphold the Trump decision. Check back with this website in the coming months as there is much more to come. 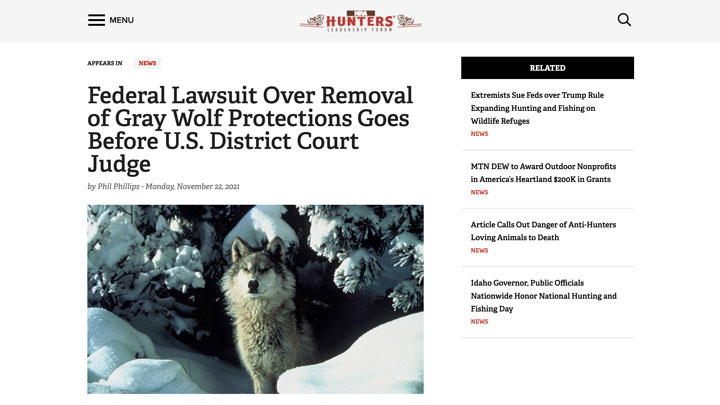 NRAHLF.org also chronicled how the past few years’ record gun sales have helped hunters and, consequently, wildlife conservation nationwide. Gun sales in 2021 were the second highest in history, behind only 2020, with more than 21 million background checks for gun purchases conducted. Because of federal excise taxes on guns and some gear, which are earmarked for use by state wildlife agencies, many people who had never owned a gun before—much less gone hunting—helped to pay the bills for state wildlife managers to do their jobs better and more effectively. And as we’ve pointed out in the past, the conservation of our renewable wildlife resources is a job for hunters and non-hunters alike.

Finally, as last January ushered in the Biden area, we took the opportunity to remind readers of the numerous gains for hunters under the Trump administration. To name just a few, on his very first day in office in February 2017, Trump’s DOI Secretary Ryan Zinke signed into effect two secretarial orders. First up was Secretarial Order 3346 overturning Director’s Order No. 219, the Obama administration’s last-minute blow to sportsmen issued by outgoing USFWS Director Dan Ashe on Jan. 19 banning the use of all lead ammunition and fishing tackle on national wildlife refuges by 2022. It was followed by Secretarial Order 3347, designed to advance conservation stewardship, improve game and habitat management and increase outdoor recreation opportunities by directing bureaus and agencies to immediately identify areas where hunting and fishing could be expanded. Among the accomplishments of Zinke’s successor DOI Secretary David Bernhardt was the USFWS’ historic opening and expansion in 2020 of 850-plus hunting and fishing opportunities across more than 2.3 million acres at 147 national wildlife refuges and national fish hatcheries—“the single largest expansion of hunting and fishing opportunities by the USFWS in history, bringing the Trump administration’s total expansion to more than 4 million acres nationwide.” The move was especially fitting, by the way, as these lands were paid for by hunters and anglers.

Considering President’s Biden’s record-low approval figures, it’s quite possible that the upcoming 2022 elections might result in even more gains for American hunters. This is in spite of the fact the animal rights extremist group known as the Center for Biological Diversity announced in November that it is suing the federal government over the Trump administration’s rule expanding hunting and fishing opportunities. In standing with hunters, the NRA is looking into intervening in the lawsuit in its efforts to keep federal lands open to legal, regulated hunting and to keep lead ammunition in use. Rest assured that NRAHLF.org will continue to provide updates.

We’re only one month into the new year and we’ve already covered the latest news from state-based issues in Arizona and Utah to regional issues such growing concerns over the lack of grizzly bear management in Wyoming, Montana and Idaho, the three states that comprise the Greater Yellowstone Ecosystem, as long-since-recovered bear populations exceed carrying capacity. Other recent material tracks increasing federal-level concerns over the spread of chronic wasting disease as the NRA and other hunter-backed groups push passage of H.R. 5608, the Chronic Wasting Disease Research and Management Act.

Please stay tuned as the rest of 2022 unfolds. 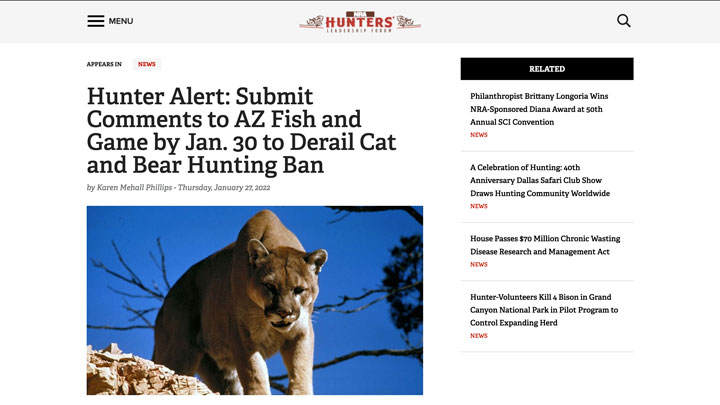 About the Author
Freelance writer Mark Chesnut is the owner/editorial director at Red Setter Communications LLC in Jenks, Okla. An avid hunter, shooter and field-trialer, he has been covering Second Amendment issues and politics on a near-daily basis for over 20 years, previously serving as editor of the NRA’s America’s First Freedom.