You read that right (couldn’t believe it myself): It’s the end of an era in New Jersey. An era marked by anti-science hysteria from preservationist groups and anti-hunting extremists running the state, resulting in numerous human-bear interactions in the Garden State. New Jersey Gov. Phil Murphy has finally seen the light—and the data—and decided to end the bear wars by reinstituting the state’s black bear hunt.

Last week, Gov. Murphy announced a radio interview that he was reinstating the black bear hunt in New Jersey, citing data on the ever-increasing conflicts, including attacks, across the state and data on the exploding ursine population in suburban New Jersey. “I feel awful,” he said, “but I can’t violate what are obvious facts that are potentially undermining public safety, particularly among kids. I just can’t in good conscience go on in this direction.”

Sound familiar? It’s a song all too familiar to New Jersey hunters and readers of this NRA Hunters’ Leadership Forum website as wildlife managers, scientists and hunters have issued grave warning after warning on the nature of the state’s exploding bear population and the consequences of inaction for half a decade. It took a while, and unfortunately a few attacks, but he got there.

“We certainly have disagreed with the Governor on many occasions, but this time he finally got it right,” said Darin Goens, NRA-ILA State Director. “We have said for years that ending the bear hunt in New Jersey would be disastrous. It didn’t take long for our point to be made. The bear population is out of control, and hunting and effective wildlife management are the only hope to bring back some semblance of balance. This point was made so crystal clear that the Governor has finally shelved politics for the science, and we applaud the move.” 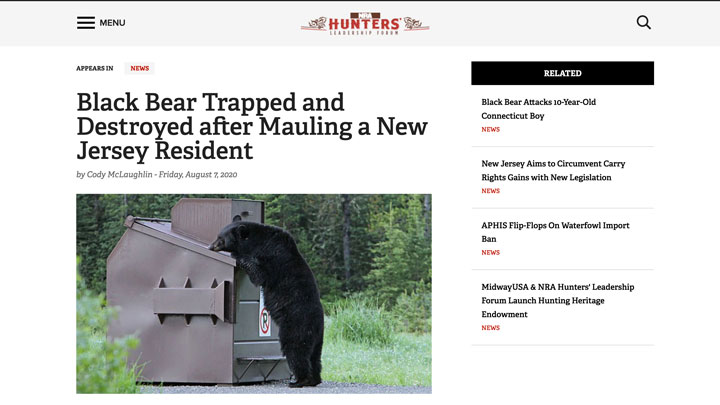 Gov. Murphy also tweeted his decision, saying: “While I committed to end the bear hunt, the data is clear: Our black bear population is growing. We must change course to prevent tragic bear-human interactions by reinstating a regulated black bear hunt in December.”

In the aftermath of a string of lawsuits culminating in a loss for black bear managers and hunters over the arbitrary and capricious nature of Gov. Murphy’s ban, the state Supreme Court ordered that there must be an official Comprehensive Black Bear Management Policy (CBBMP) in place which designates hunting as a tool for the council to legally set a bear hunting season. Gov. Murphy used this to get around his inability to shutter the bear season on all but private lands by waiting for the original policy to expire and ordering cabinet member DEP (Department of Environmental Protection) Commissioner Shawn M. LaTourette to refuse to approve an updated policy in the spring. The policy needs both his approval and Gov. Murphy’s signature to be legal. Later in the summer when the council voted unanimously to approve an “emergency” bear hunt, and both Gov. Murphy and LaTourette again refused to sign the document.

This could delay how quickly Gov. Murphy’s decision can be implemented, as the new policy must be put to a vote. Then it must be submitted and approved by both offices in time for the proposed black bear shotgun hunting season set for Dec. 6.

Hunters and local elected officials have rejoiced over Gov. Murphy finally coming to his senses. Local legislators in District 24, the epicenter of the bear complaints, released a press release commending the move. “Hunting is an important part of the comprehensive set of practices that the state employs to manage the black bear population and minimize danger to people and property,” said Sen. Oroho. “By his executive action to allow the bear hunt to recommence, I believe the Governor is recognizing this fact and I applaud his actions. Going forward, I hope the Administration will continue to follow the data and allow the wildlife conservation experts—who best understand the issue—to guide New Jersey’s bear management policies.” 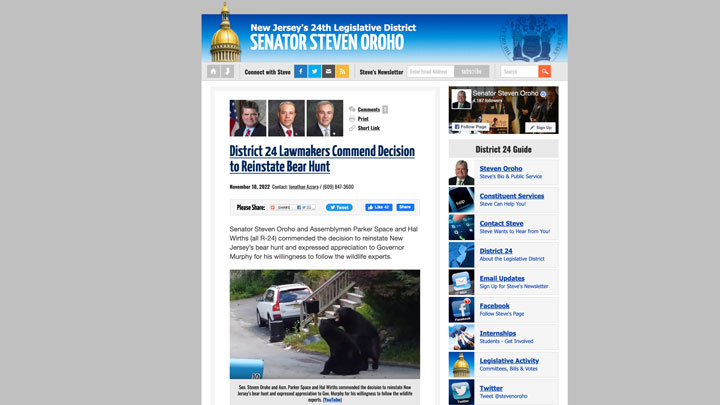 All About the Numbers
Here’s a line I wrote in a story about the exploding black bear hunt nearly three years ago now, which will give readers some insight into how far back we were warning Gov. Murphy of the deluge of bear conflicts he and, more importantly, New Jerseyans, are now experiencing:

“Black bears in the Garden State have no predators and incredible survivability rates. In fact, 80 percent of New Jersey bears survive to adulthood. That is in addition to them breeding at twice the rate of other states (regularly producing three to four cubs every two years, rather than just one or two). That, coupled with the fact that more than twice as many bears are born every year as are killed in the hunt on a good year, and NJ is in for some long-term problems with its burgeoning and exploding bear population.”

These numbers only increased after the outright ban on bear hunting in 2021, resulting in astronomical increases in negative bear-human interactions, including dangerous “Category 1” bear complaints.

A Quick History of New Jersey’s Black Bear Tug-of-War
The black bear hunt in New Jersey has been a controversial topic for quite some time but really came into the public eye in 2017 when the governor (then candidate for governor), Phil Murphy, announced a campaign promise to end the state’s black bear hunt. Shortly after winning the election, and receiving legal advice that even as America’s most powerful governor, he couldn’t outright ban the bear hunt, he moved to ban it from public lands,

effectively striking bear hunting as a management tool from 60 percent of the state’s huntable land.

After a lawsuit and an unexpected initial loss in the Superior Court of New Jersey’s Appellate Division, the court upheld the ban on the grounds that it felt neither party to the suit offered sufficient evidence to move forward in either direction.

During the year and a half that the state land ban was in place, we saw a world record bear come out of New Jersey. The fact that an 800-plus-pound bear can be supported by the habitat is evidence of the potential of the population to continue to grow. New Jerseyans also experienced their first inkling of increased conflicts, including a spike in bear encounters on the New Jersey section of the Appalachian Trail and a startling spike in bear interactions in just the first year after the hunt ban on state lands. In the first year post-ban, bear sightings jumped up a whopping 93 percent, complaints spiked 40 percent—with a 15 percent spike in dangerous “Category 1” complaints—and overall bear reports spiked 53 percent. This, unfortunately, was only the tip of the iceberg.

Just six months after that report came out, New Jersey had its first mauling in five years, which occurred in a West Milford man’s garage, resulting in him needing 30 stitches in his face after he surprised the bear while grabbing a beer from his beer fridge that night. As I wrote then, “Unfortunately, this is only the beginning of human-bear conflicts in the state of New Jersey as the bear population continues to explode across the state.”

Nearly a year after that mauling and further increases in black bear complaints and negative bear-human interactions, Gov. Murphy made an end-run around the state’s powerful Fish and Wildlife Council by waiting for the expiration of the state’s Comprehensive Black Bear Management Plan and refusing to endorse an updated policy, an administrative maneuver that effectively closed the bear hunting season in New Jersey. While Gov. Murphy and his administration were trying to keep the public calm with platitudes and claims that “incidents [human-bear conflicts] have remained fairly steady between 2017 and 2019,” as this website reported: As of 2020, New Jersey reached another record number of complaints—an increase of 66 percent over the previous record set in 2019.

Fast forward to this year and, as I regret to say we hunters and hunter-backed groups like the NRA predicted for years, black bear attacks are continuing and on the rise. A full two years after the ban, a black bear killed a person’s dog and bit the owner when she tried to rescue it. In May, a woman in Lafayette was attacked by a bear while checking her mail. Another dog also was recently killed in the Garden State. The attacks got so bad that local elected officials literally begged Gov. Murphy to allow a hunt to keep their communities safe. Finally, the state is moving in the right direction.

About the Author
Cody McLaughlin is a conservationist and conservative thought leader on public policy issues including hunting, fishing, gun rights, free-market tax and wage policy and the environment. He led the charge for half a decade to push back against anti-hunting extremism and reinstate the black bear hunt in New Jersey. In his day job, he works as a GOP consultant for conservative political causes and serves on the board of the Alaska Outdoor Council (the Last Frontier’s State NRA Affiliate). He is a former board member and lead spokesman of the New Jersey Outdoor Alliance, helping to represent the state’s 1.2 million sportsmen in the political arena.