The animal rights extremist group Humane Society of the United States (HSUS) continues its state-by-state efforts to end black bear hunting, with its most recent push coming in the form of a petition to the California Fish and Game Commission to indefinitely suspend hunting the species in the Golden State.

Twenty-five hunter-backed groups, including the NRA Institute for Legislative Action, have formed a coalition to fight the petition and other attempts to ban legal, regulated hunting. In a nine-page letter signed by the coalition on Feb. 14 and addressed to Peter S. Silva, president of the California Fish and Game Commission, the groups asserted, “First and foremost, the undersigned organizations are united in extreme opposition to any closure of bear season in California, as the best available science clearly validates that our black bear populations are currently in excellent condition.” It goes on to call out the fuzzy math of the animal rights extremists responsible for the petition, referring to “the petitioners attempt to discredit the methods the CDFW uses to derive black bear population estimates. They then contradict themselves by using the same data to claim bear populations in California have decreased by 67 percent.”

Intentionally inaccurate and misleading, the petition reuses a common refrain of animal rights extremists by casting aspersions on the state wildlife scientists who are tasked with the species’ management and conservation. As the coalition letter explains, “Although the current best available data clearly shows that California’s bear populations are currently at historic levels, Petition 2021-027 attempts to assert that our black bear populations are at such extreme risk of extirpation from climate change, wildfires and drought that no additional hunter harvest should be allowed.” It shares how the petitioners only included literature that supports their petition, stating a lack of research on black bears in California when, in fact, there is extensive data. It also points out how “the petitioners made numerous unsubstantiated claims, appear to intentionally misrepresent population data, and make baseless accusations which completely contradict the results clearly presented by CDFW in their “Black Bear Take Report of 2020.”

In representing the hunting and conservation community, the letter underscores that the undersigned groups are unified in their support of the North American Model of Wildlife Conservation based on the Public Trust Doctrine. “Wildlife management and the discharge of wildlife policy must be founded on science and guided by the professional biologists at CDFW,” it notes. “The North American Model and its science-based approach have created the most successful wildlife conservation system in the world, restoring the health of hundreds of species. We are confident that CDFW would agree that Petition 2021-027 is intentionally inaccurate and misleading. CDFW is using the best available methods and has ample science to demonstrate California’s black bear populations are currently in excellent condition.”

California is not the first state to see animal rights extremists push to ban bear hunting. Most recently the HSUS, in concert with the Center for Biological Diversity, has been making huge digital pushes via email and paid advertising to drive commentary in favor of banning bear hunting during the rulemaking process. This playbook was used to great effect in the recent banning of the spring black bear hunt in Washington State.  In that case, the groups formed a shadow organization to provide an avenue through which to raise and spend money on their anti-hunting advocacy. We’ve also seen HSUS-led efforts to ban bear hunting win out in New Jersey and in other places where local government leadership is aligned with animal rights extremists’ interests. 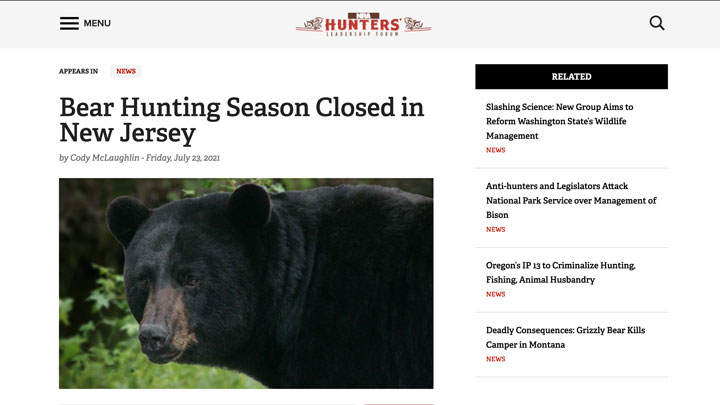 Fortunately, hunters have science on their side. The scientific community reached consensus long ago that hunting is a boon to conservation and has affirmed time and again—from the courtroom to legislatures around the country—that hunting is the best way to control predator and prey species alike. HSUS tried the legislative route in California just last year, but the bill was pulled by its primary sponsor after backlash from those who support legal, regulated hunting as a wildlife management tool. As a result, groups like the HSUS target that science with a different weapon: math, aiming to distort the truth to try and sway those who know nothing about hunting to their side. Strength in numbers is a powerful tool in politics, so they attempt to use it to bully legislators and policymakers at the state and federal levels into capitulating to their demands.

Hunters should keep up to date on these and other efforts across the nation to reduce the consumptive use of our renewable wildlife resources. Extremists know hunters and legal, regulated hunting are supported by wildlife science, yet they continue working to hinder our renown North American Model of Wildlife Conservation and our hunting heritage.