Where Our Taxes Go: Pittman-Robertson Funds for Wildlife Conservation Featured in New Video

If you are an American hunter, you’ve no doubt heard of the 1937 Federal Aid in Wildlife Restoration Act, better known today as the Pittman-Robertson (P-R) Act. A revolutionary idea, the P-R Act levied an excise tax on firearms, ammunition and archery equipment with those tax dollars paid by sportsmen and women going to state fish and wildlife agencies for wildlife conservation projects.

Since its inception, the P-R Act has raised $14.7 billion for the benefit of wildlife conservation and restoration, hunter education and shooting ranges. But how does this tax on shooting sports products ultimately translate into funding for wildlife conservation on the ground and in the field where it really matters? A new video released by the National Shooting Sports Foundation (NSSF)—titled “Power of Partnership: A Public-Private Partnership Benefiting Wildlife & Habitat Conservation”—explains exactly that.

The fourth video in NSSF’s Power of Partnership series found on the group’s “Partner with a Payer” website, it features Sarah Parker Pauley, Director of the Missouri Department of Conservation, who shared, “Here in Missouri, we had our first elk [hunting] season in modern times introduced last year and our first black bear season this year. These are stories now of new opportunities for our hunters and anglers that wouldn’t be possible without these critically important (P-R Act) funds.”

In step with this video and further attesting to how sportsmen’s dollars fund the bulk of wildlife conservation, this NRA Hunters’ Leadership Forum (HLF) website just reported “the U.S. Fish and Wildlife Service [USFWS] announced that a record $1.5 billion will be distributed to state wildlife agencies for wildlife and habitat conservation and outdoor recreation initiatives in 2022. This level of funding sheds light on the impact we [sportsmen] have on the outdoor recreation economy, which has grown even more since the pandemic.”

As this NRA HLF website shared in 2020, Partner with a Payer website content focuses on the resulting benefits produced by this excise tax and distributed via the USFWS to state agencies. 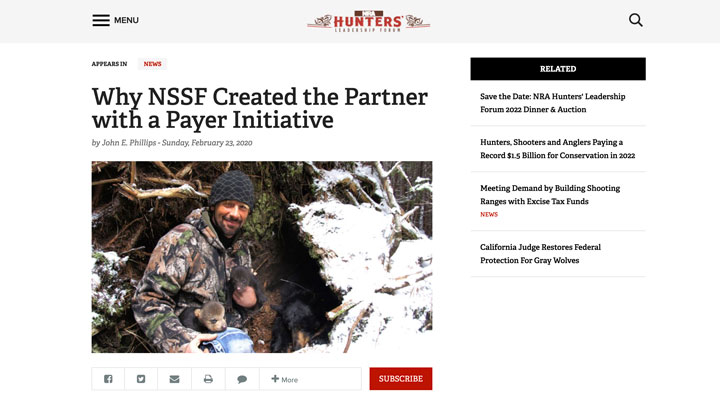 “Ruger, Colt, Thompson/Center, SIG Sauer, Smith and Wesson, Mossberg, Kimber and Remington employees have gone afield with professionals from fish and wildlife divisions in Massachusetts, Connecticut, Vermont, Alabama and Maryland and learned how these agencies are utilizing excise tax monies,” said then-NSSF Director of Research and Marketing Development Jim Curcuruto. “These trips have partnered manufacturers to work alongside these agencies.”

The staffs from the shooting sports industry companies gained a new appreciation and understanding of what their partners in these wildlife and conservation agencies do to make the North American Model of Wildlife Conservation work. And that work is extremely important, to wildlife species and their habitats as well as to hunters and non-hunters alike.

As the 2020 article also noted, “If not for P-R monies, many wildlife agencies couldn’t accomplish what they do since P-R monies often make up one-half of their yearly budgets,” said Peter Churchbourne, a director with the NRA’s Hunter’s Leadership Forum. “The P-R Act is an incredible program that benefits every American—not just hunters. The conservation and education programs that P-R funds make our country a better place for everyone, including the animals and the birds that the programs are meant to help. All hunters need to share the message of P-R as it educates and affirms that hunting has a positive effect on our world.”

The other Power of Partnership videos include:

NSSF President and CEO Joe Bartozzi said, “It is an incredible model of conservation funding that benefits all Americans, not just hunters and target shooters, and helps ensure sustainable wildlife and habitat for future generations. Our industry’s contributions to this program are something we’ve long been proud of, and we want the employees of companies and state agencies to be also, which is why we’re proud to be involved with the Partner with a Payer program.”

The NSSF videos were produced by Shine United LLC/Kingdom Filmworks through a Multistate Conservation Grant awarded by the Wildlife and Sport Fish Restoration Programs of the U.S. Fish and Wildlife Service.

About the Author
NRAHLF.org contributor Brian McCombie is a field editor for the NRA’s American Hunter and writes about firearms and gear for the NRA’s Shooting Illustrated. He is a member of the National Rifle Association and the National Shooting Sports Foundation. Brian likes hunting hogs, shooting 1911s chambered in 10 mm and .45 ACP, watching the Chicago Bears and relaxing with his two cats, Peanut Morgan and MikaBear.