Recent polls show that while only about 4.4 percent of the general public hunts, 81 percent support ethical hunting. But still, the number of hunters is declining. In response to that decline, the national R3 (Recruitment, Retention and Reactivation) movement is working to recruit, retain and reactivate hunters. As noted on this website, experience is a great teacher and many R3 efforts involve ways to get people out in the woods, learn skills and have a good time. But is this enough? 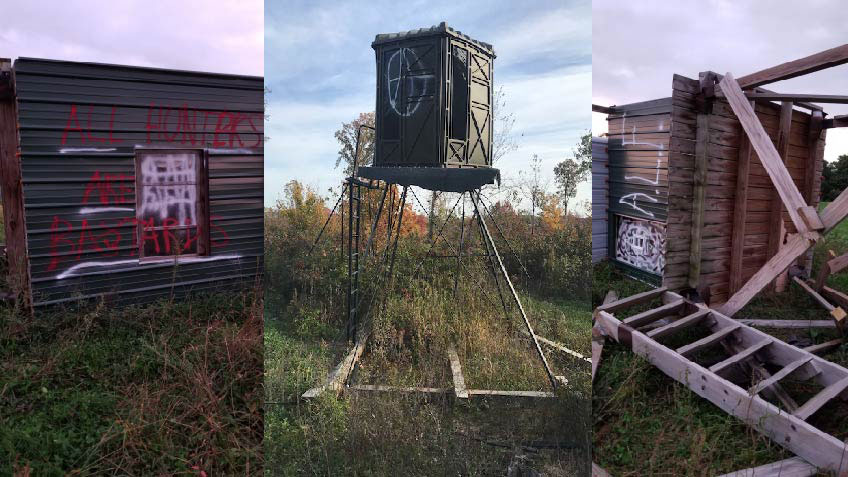 As this website has reported regularly, hunter harassment is real. (Click this link to read more.) Hunters should watch their backs and alert the proper authority, which is usually the law enforcement division of your state wildlife agency. Thanks to the NRA, there are anti-hunter-harassment laws on the books in all states.

This is the Information Age, when studies show that many Americans spend up to seven hours a day interacting with electronic devices, especially computers and cell phones. Much of what appears on the Internet is definitely biased. Studies show that news media tends to be 10 to 17 times more negative and sensational than objective. The bottom line is that the number of hunters is decreasing, while the number of people who support animal rights is increasing as extremists continue to work to hijack the animal welfare platform. And, many anti-hunting groups have offices in the Hollywood, Calif., area where they seek to make the animal rights agenda politically correct.

These factors and others translate into fewer mainstream films like “The Ghost and the Darkness” and “Dances with Wolves” that show hunters as heroes, while other TV and films show hunters as accident-prone bad guys such as two recent feature films—“Walking Out” and “The Legacy of a Whitetail Deer Hunter”—that portray kids of hunters going hunting and accidentally shooting someone. (As this website has noted, hunting is safer than golfing and hiking, incidentally.) Another recent poll reports that 62 percent of the general public believes that a lot of hunters break hunting laws, are reckless and drink alcohol while hunting. Game wardens tell me that the actual statistics of hunters who behave badly are less than 1 percent.

As we seek ways to help conserve wildlife and protect hunting as a legal, regulated wildlife management tool, consider the state of a related shooting sport—archery—where participation has increased from three million archers in 1980 to 24 million today. Why? 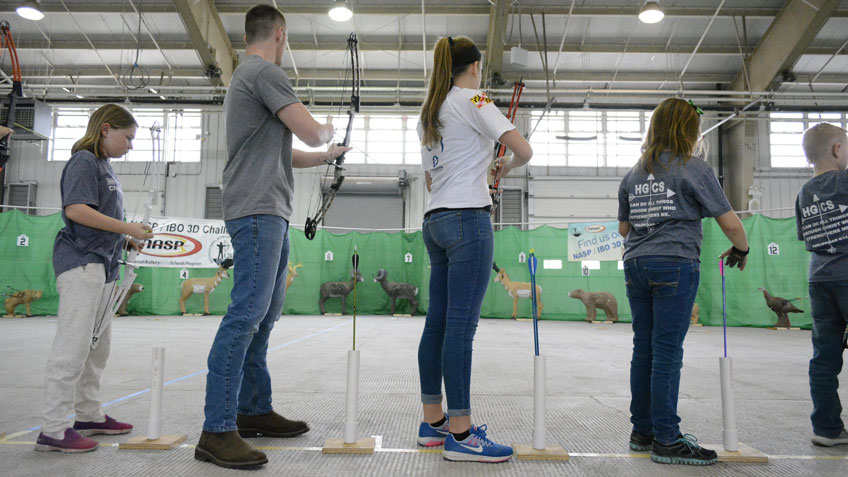 One reason for the increased interest in archery is the National Archery in The Schools program (NASP). Since being founded in Kentucky in 2002, NASP has engaged over 18 million students in over 14,000 schools in 47 states, nearly all Canadian provinces and 10 other countries. Currently, over two million kids from 4th to 12th grade participate in NASP every year. It’s the largest youth archery program in history, and it’s growing at 9.3 percent annually with about 1,000 new schools joining every year. (In addition, as reported by this website, the Archery Trade Association (ATA) is working with state wildlife agencies on the hunting front to reduce barriers to getting into bowhunting by making equipment regulations consistent.)

Students in grades 4 through 12 participate in NASP in public and private schools. Some continue shooting archery in college and take part in other recreational teams, even the U.S. Olympic archery team. Others have become professionals in the archery industry. According to Roy Grimes who developed NASP, there has never been a serious accident in NASP events.

According to a 2017 poll of students participating in NASP, as a result: 58 percent of students feel more connected at their school; 40 percent of students work harder in school; 34 percent buy non-NASP bows; 17.5 percent bow hunt and another 34 percent want to hunt but haven't yet; and 20-plus percent hunt with firearms or want to give it a try. And archery is a lifelong sport.

NASP and other R3 programs such as Junior Olympic Archery Development and Scholastic 3D Archery (S3DA) are providing many people a chance to try archery. But what’s getting them interested in archery in the first place? To quote Forbes magazine, it’s mainstream media. 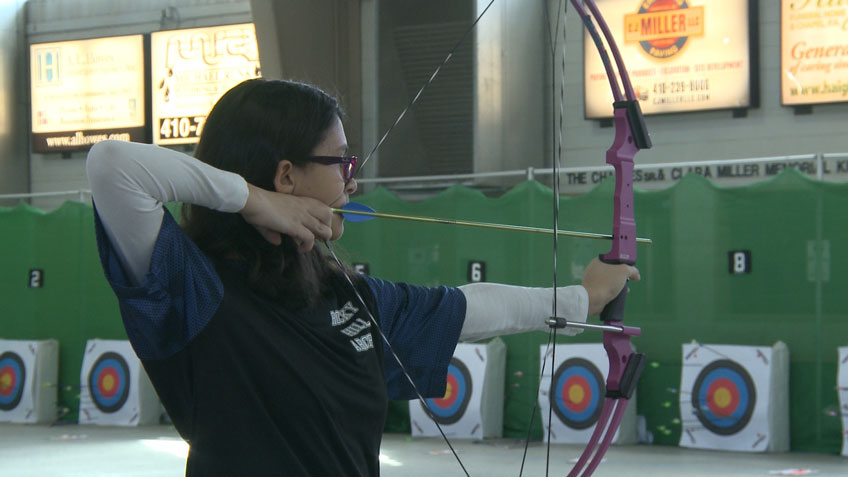 The media and pop culture can indeed drive growth in a particular activity, such as the influence of "The Hunger Games" on archery participation levels. (Image by James R. Mackey, Jr., Wildlife and Heritage Service, Maryland Department of Natural Resources.)

Can mainstream media really influence people about outdoor sports? In 1992, the feature film “A River Runs Through It” opened in theatres nationwide. Two years later there were over 100,000 more fly fishermen in the streams, the number of times people went fly fishing doubled, and the business of the fly-fishing industry doubled.

For another example, in 2007 California game wardens asked my son and I to produce a documentary about the state’s shortage of wardens in the field, which then totaled 192. We worked on the documentary for two years. A Hollywood agent saw a rough cut of the film and took it to Hollywood. This resulted in the National Geographic Channel show “Wild Justice,” which my son and I helped to produce. After the release of the documentary and three years of the “Wild Justice” TV series, the number of California wardens afield is now 364.

Since the birth of the big screen a century ago, there have been numerous on-screen archers. This began with the 1922 silent film "Robin Hood" starring Douglas Fairbanks. A second version of Robin Hood starring Erroll Flynn in 1938 was also extremely popular. Since then, Sean Connery, Russell Crowe, Kevin Costner, Jennifer Lawrence, Orlando Bloom, Sylvester Stallone, Nicolas Cage, Burt Reynolds, Cary Elwes, Dwayne “The Rock” Johnson, Jeremy Renner, Soirse Ronan, Chris Pratt and many others have played heroic archers in films and TV, including in the popular TV dramatic series “Arrow” where the lead character is played by Stephen Amell. Other popular TV shows with heroic archers include “Game of Thrones” and “Atlantis.”

The number of archers in the United States has mushroomed, and as many as one-third of them are women. According to the Archery Trade Association (ATA), a big boost for women in archery came in 1999 when Oscar- and Golden Globe-winning actress Geena Davis became a semi-finalist for making the U.S. Olympic archery team after being inspired to take up the sport by watching Olympic archers on TV. 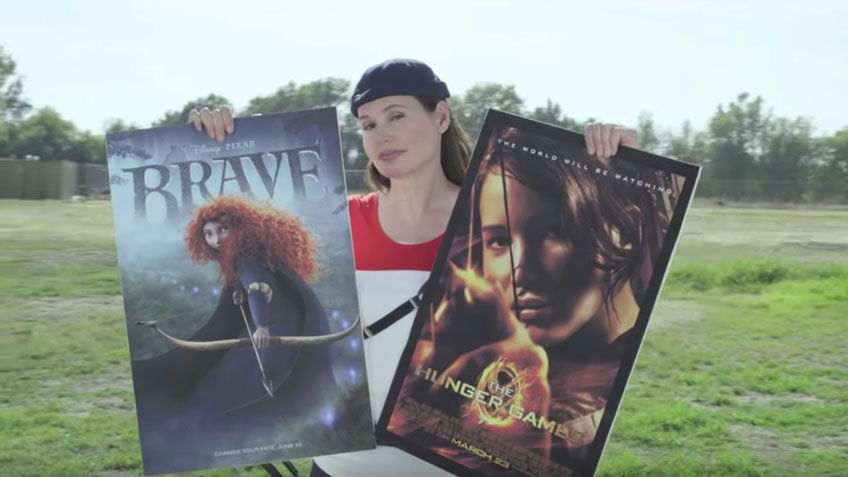 Actress and former Olympian-level archer, Geena Davis believes that if a girl sees other girls doing empowering things in movies, they will be inspired to fulfill their dreams. She financed research to see if this was in fact true through the Geena Davis Institute on Gender in Media.

A second major increase in female archers came when “The Hunger Games” series of movies starring Jennifer Lawrence, “Lord of the Rings” and “Brave” were on the big screens. During that time, the ATA says its members grew 48 percent.

These days I work as a writer, producer and actor. In a recent Outdoor Wire article, I suggested a variety of strategies about how hunters might cultivate a positive relationship with mainstream media. It’s one thing to talk. I decided to walk my talk.

I spoke with friends in the entertainment world and we quickly came up with an idea. Inspired by my earlier association with late actor and former NRA president Charlton Heston and his Charlton Heston Celebrity Shoot, which he began hosting annually in 1887, I asked why not create a celebrity archery shoot?

The First Annual Hollywood Celebrity Archery Shoot will take place Nov. 16 at Conejo Valley Archers in Simi Valley, Calif. This is a benefit to support NASP and hopefully build some bridges between archers and Hollywood.

About the Author:
James A. Swan, Ph.D. is co-executive producer of the “Wild Justice” series on the National Geographic Channel and chief executive officer of Snow Goose Productions, LLC. His 2008 documentary “Endangered Species: CA Fish and Game Wardens,” is the inspiration for the “Wild Justice” series. A recent project is as a co-writer for “Falconer: The Sport of Kings,” winner of Best Film and Script at Skyfest Festival. His book, “War in the Woods,” co-written with Lt. John Nores, (Lyons 2010), has been optioned for a scripted dramatic TV show, “Lone Pine,” that’s currently in development. He’s the author of 10 nonfiction books on human aspects of environmental conservation, including three about the psychological aspects of hunting, that have sold over 250,000 copies and over 800 articles and his columns have appeared in a wide variety of publications including NRAHLF.org and American Hunter. James also has appeared as an actor in 20 feature films, three dramatic TV series and 30 industrials, commercials and print ads. To learn more about James visit his website.

RELATED
Religions of the World Support Hunting
News
Just the Facts on Wolves and Coyotes
Facts & Stats
Does a Hunter’s Gunshot Attract Predators?
News
How to Use the Mainstream Media to Save Hunting
News