Photo credit: Darron McDougal: After years of hunting successfully all across the United States, the author returned to his childhood roots and used the same .410-bore shotgun he’d grown up shooting red squirrels with to bring down this big fall 2017 gobbler.
More
SUBSCRIBE

I know of no better way to braid into the hunting community than fostering solid hunting relationships. One of my most dated and cherished is Pa, my grandfather. As a young child, I spent hours at my grandparents’ home staring out windows for the telltale flickers of auburn tree dwellers, that is, red squirrels.

In the early days, I’d spot one, and Pa would walk out with me until I was positioned, then safely pass me his break-barrel .410-bore shotgun. And when business was slow near the house, he’d say, “Let’s take the .410 for a walk.” It was music to my ears. If that didn’t produce any action, we’d often get out a .22 LR or BB gun and plink pop cans.

Once I proved that I was responsible, he loosened the leash a bit and would send me out alone, observing from the window.

Shooting pop cans and red squirrels at a young age really solidified a platform from which to launch into bigger and better things: big game hunting.

First Deer Hunt with Pa
It all began in an ice-cold deer blind in Michigan’s Upper Peninsula. At the time I hadn’t reached minimum hunting age, so I was along to accompany Pa, observe and learn.

During that hunt, I nearly froze my butt off, but didn’t dare tell Pa; I wanted him to think I was tough stuff. Naturally, I’d warm up a bit each time a deer, or seven, would filter past our blind. We saw so many does and fawns, and finally, a buck. Boom! He missed. (Shh! Don’t tell him I said that.)

Later, we saw what appeared to be two timber wolves, though it was difficult to positively identify them as we saw merely bits and pieces as they prowled through the timber.

Following the hunt, I immediately realized that big game hunting is far more serious business than sniping pop cans and red squirrels. And I thought I’d taken that seriously. 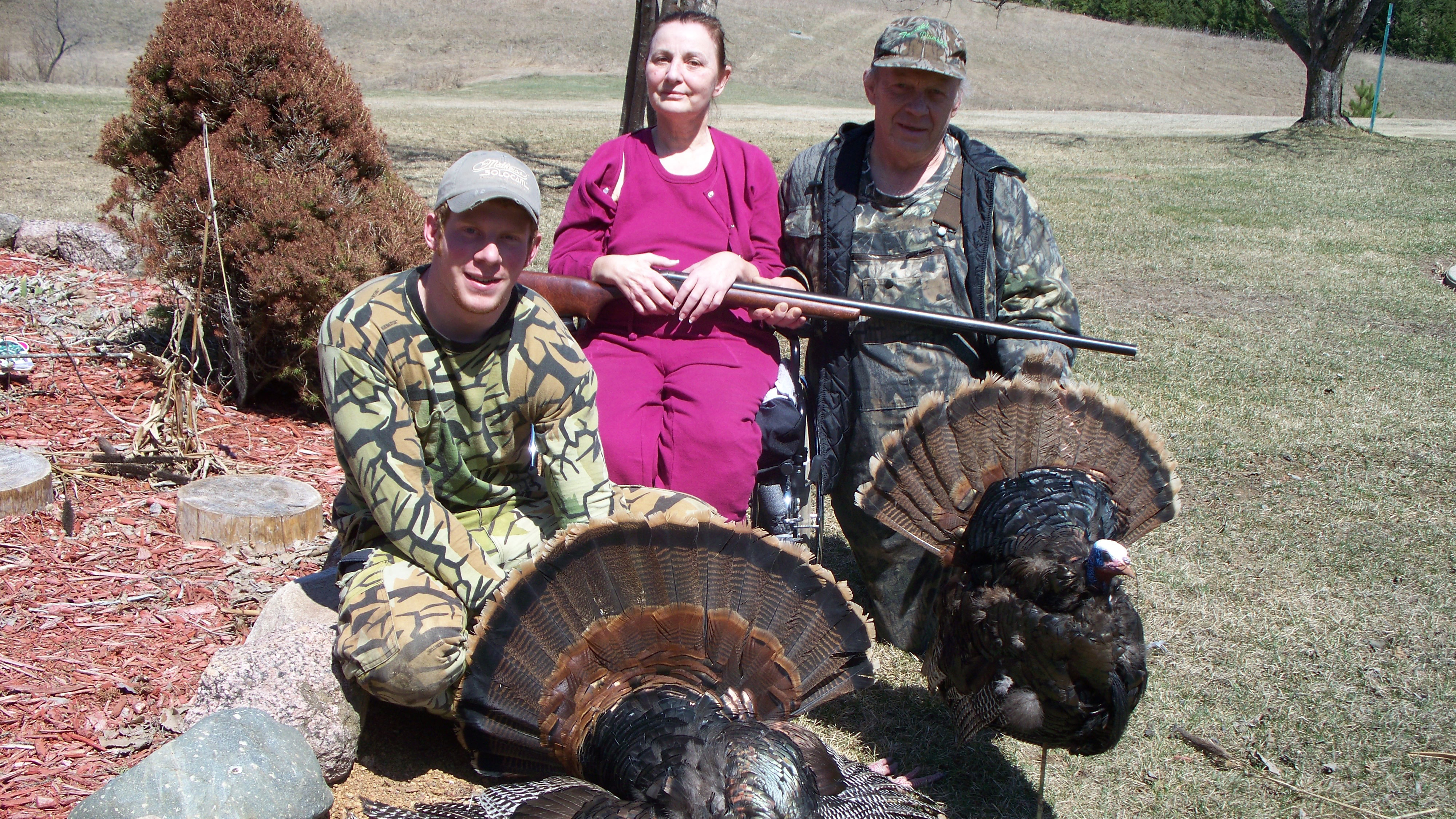 A decade ago, while the author’s grandmother was losing her battle with ALS, McDougal and his grandfather fit in a quick hunt that landed this big gobbler. McDougal had introduced his grandfather to turkey hunting four years earlier. The grandson-grandfather hunting relationship had come full circle. (Darron McDougal image)

Returning the Favor
Several years later at age 15, I’d taken a few deer and turkeys—mostly by bow—while hunting with my parents and brothers. Meanwhile, I knew Pa had never gone turkey hunting, so I suggested that we go together. He agreed.

Pa drew a tag, and we elected to hunt on his 80 acres. We also obtained permission to hunt an adjacent farm. I was so thrilled to introduce Pa to turkey hunting, do most of the calling and show him what I knew. As well, I brought my family’s pop-up blind so we could communicate more easily without exposing our movements.

After a few difficult days of hunting, we finally got a break on the fourth afternoon when Pa peered behind the blind and spotted eight male birds moving our way. Two toms split from the rest and beelined toward our jake decoy. Pa knocked down the larger bird. High-fives and ear-to-ear grins followed. So have many more successful turkey hunts since.

Four years later, I invited Pa to accompany my mother and me on a Nebraska muzzleloader deer hunt. Pa had previously carried a traditional muzzleloader and hadn’t taken a deer with it. For the trip, he obtained a modern inline alternative.

Early in the hunt, a solid eight-pointer exited a private-land cornfield and entered the public land we were hunting. I immediately offered Pa the opportunity.

When the buck stopped broadside at 170 yards, Pa knocked him down, and we quickly moved downhill where he administered a finishing shot. I’d helped Pa get his first turkey and his first muzzleloader buck. It was the least I could do in return for his guidance and support when I was younger. After all, hunting relationships involve both giving and taking—a two-way street.

Despite that, I can’t forget where I came from or how my hunting lifestyle started. Even though Pa is still alive and hunting, I find great sentiment in occasionally borrowing and hunting with some of the relics in his gun den. Each time I carry one afield, I remember all that Pa did to encourage me to chase and cherish this lifestyle.

In the last decade, I’ve taken many turkeys with his time-worn shotguns. You guessed it, that includes the same break-barrel .410-bore I shot squirrels with as a child.

I know it: On the days of God’s choosing, Pa and I will pass on. But, the smoke of our hunting relationship—and of the muzzles of his time-worn guns—won’t clear. It will live on through those we’ve impacted during our time here and the other hunting relationships we’ve created. In fact, I bet that little .410-bore will be the platform it was for me for many more children ahead.

Fact is, I don’t know where I’d be without my granddaddy and his guns.