Several years ago, Smoldering Lake Outfitters in Maine began hosting the annual Maine Disabled Veterans Controlled Moose Hunt. It also serves as the host facility for the Kicking Bear Ministry’s Kicking Bear Camps for youths in the state. Disabled veterans get the rare opportunity to hunt moose, and then at the end of the week, they help out with mentoring youths during the Kicking Bear Camp. An immeasurable level of impact happens during the back-to-back camps, and lives are touched along the way.

“Since the beginning of the Maine Chapter of Kicking Bear, we’ve included several law-enforcement demonstrations during the activities portion of the camps,” said David Hentosh, a guide with Smoldering Lake Outfitters. “There are K-9 demonstrations by the Maine Warden Service, the Sheriff’s Department and Maine State Police. One year, the U.S. Border Patrol did a fly-in, and many officers volunteered, in uniform, as mentors. The officers were involved in all the games—instructing archery, tomahawk throwing, BB-gun shooting, tug-of-war, water balloons and marshmallow fights.” 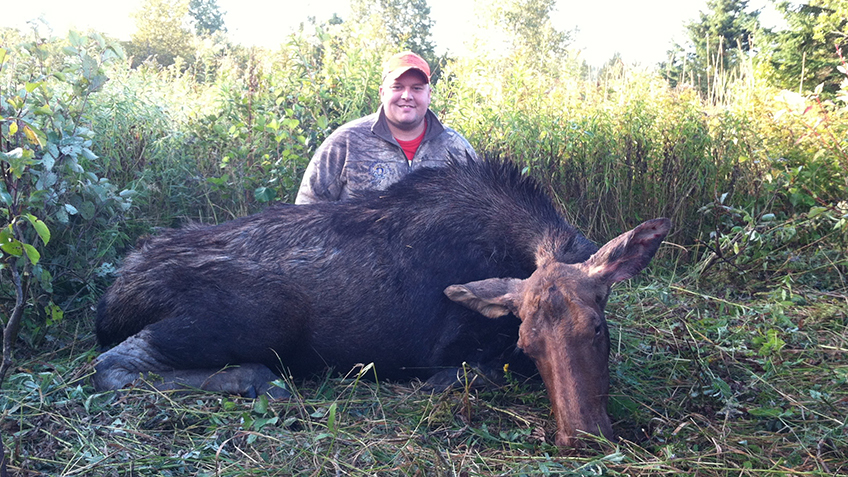 Disabled veteran Jack Zimmerman not only harvested a moose while in Maine, but he was also able to mentor youths at a Kicking Bear Camp. Interestingly, he reports that the youths he instructed had a great impact on him. (Image courtesy of Jack Zimmerman.)

The Beginning of Change
According to Hentosh, the positive experiences with the youth of the community pays big dividends, especially with those at risk. “Officers on duty noted that the same kids who used to run and hide when they’d patrol their neighborhoods now go out of their way to say hello,” he said. Sheriff Mitch Wheeler affirmed, “You cannot believe the difference between the kids who attended Kicking Bear, with regard to friendship and respect toward our officers, and kids who haven’t attended.’”

With the growth of both programs, Hentosh and Kicking Bear Ministry’s owner, Ray Howell, felt it’d be wise to involve some of the combat veterans—already in camp for the moose hunt—with the Kicking Bear event. “We noticed through Facebook and other social media that many kids don’t understand what the ‘sacrifice’ for freedom is,” Howell said. “And our returning military people were seeing what was happening in our nation and wondering, ‘What was our sacrifice for?’”

The mentorship and interaction between Kicking Bear Camp participants and the veterans was a positive move.
“Intending to share the selfless sacrifice of our veterans with the kids, we didn’t realize the profound effect the kids would have on the veterans.”—David Hentosh, a guide with Smoldering Lake Outfitters

“Intending to share the selfless sacrifice of our veterans with the kids, we didn’t realize the profound effect the kids would have on the veterans,” Hentosh shared. “Once a Kicking Bear event begins, all social, age and other barriers disappear. Much like hunting and hunting camp, the world melts away and healing begins.”

Hentosh said some of the vets later shared how interacting with the kids and letting loose reaffirmed what they fought to preserve. One such veteran is Jack Zimmerman, who shared that the moose hunt, and specifically the Kicking Bear event, gave him new focus and brought him out of a dark place.

In 2009, Zimmerman joined the U.S. Army, became an infantryman and joined the legendary 101st Airborne Division.

“I deployed to Afghanistan in 2010,” Zimmerman said. “There, I stepped on an IED, resulting in double above-the-knee amputations. I also lost use of my right hand. When I was laying on the battlefield that day, my entire life flashed before my eyes. I saw everything from age 5 until the hours before I was blown up. I knew that I was going to be OK whether I lived or died. I suddenly heard the chopper coming as I seemed to be dying,” he added. “I told myself that I couldn’t die. I stayed motivated and kept breathing.”

The chopper airlifted Zimmerman to Kandahar Hospital. There, he was put into an induced coma.

“I woke up five days later in San Antonio and started the rehabilitation process,” he said. “I went through 20 surgeries and extensive therapy over a year and a half before moving back to Minnesota.”

Zimmerman had been an avid hunter prior to the injury and wondered if he’d ever hunt again.

“There are many wonderful people in this country who want nothing more than to give back to the soldiers who fought for their freedoms,” he said. “I’ve had the pleasure of meeting many of these people, and many have made it possible for me to experience several dream hunting trips.

“Hunting has been a huge part of my recovery,” he said. “One of the most impactful hunts I’ve done was the Maine Disabled (Controlled) Veterans' Moose Hunt several years ago. I met some people there who changed my life.”

Zimmerman was unsuccessful during that hunt, but he returned the following year and was fortunate enough to harvest a moose and also take part in his first Kicking Bear Camp, which he says was a great opportunity to introduce the campers to the outdoors and new experiences.

In fact, Zimmerman explained that the most therapeutic thing he has done for himself since returning home from service was being part of the Kicking Bear Camp—and that he’s not the only veteran who experienced this. Other veterans who also were in very dark places after returning home from being deployed had experienced similar results from this life-changing event.

“Probably one of the most impactful things I witnessed was listening to an injured warrior, one of my brothers in arms, share his testimony around the evening bonfire about how God had a plan and purpose for his life, and how He has a plan and purpose for everyone,” Zimmerman said. “And that purpose is for good. I will always remember that Kicking Bear Camp, and I hope to be a part of more in the future. The kids who attended impacted me, and I hope I was able to help them, even if only in a small way.”