Take a second to think about your perception of a national park. Stunning vistas, day hikes, guided tours and wildlife up close and personal. These national parks set up by the father of modern American conservation, U.S. President Teddy Roosevelt, were and are a fantastic foresight into conserving wild places. That said, while these places are often a haven for scores of animals due to the lack of hunting pressure, they can have their own population issues. Bears, for example, are often removed by officials when they become problematic in Yosemite National Park in California. Yellowstone National Park is a great example of how the need to thin elk numbers turned into what many hunter-conservationists would call a catastrophe across the West with the reintroduction of wolves. Through all of this, one has to wonder why hunters are not automatically used as volunteers instead of sharpshooters to assist with wildlife population reduction. Fortunately, thanks to groups such as the National Rifle Association and Safari Club International, NRAHLF.org recently reported on the National Park Service’s (NPS) common-sense plan to use hunters as volunteers to help decrease the size of elk and bison herds in several national parks.

One such park that is now using hunters as volunteers is Wind Cave National Park (WCNP) in South Dakota, which annually hosts an “elk reduction” to address its high rate of CWD (chronic wasting disease). “During a study held between 2005 and 2009, the prevalence of CWD jumped to 10 percent,” said Chief of Resource Management Greg Schroeder. “During that same study, from 2011 to 2014 the rate had jumped to 10 percent, mostly among adult cow elk.” As a part of the Wind Cave Elk Management Plan and Environmental Impact Statement signed in 2009, WCNP annually seeks eight experienced hunter volunteers to join NPS staff during the first two weeks of February on the reduction. Schroeder noted this is a true reduction of the herd as volunteers are specifically instructed on which animals to take—again, mainly adult cow elk. 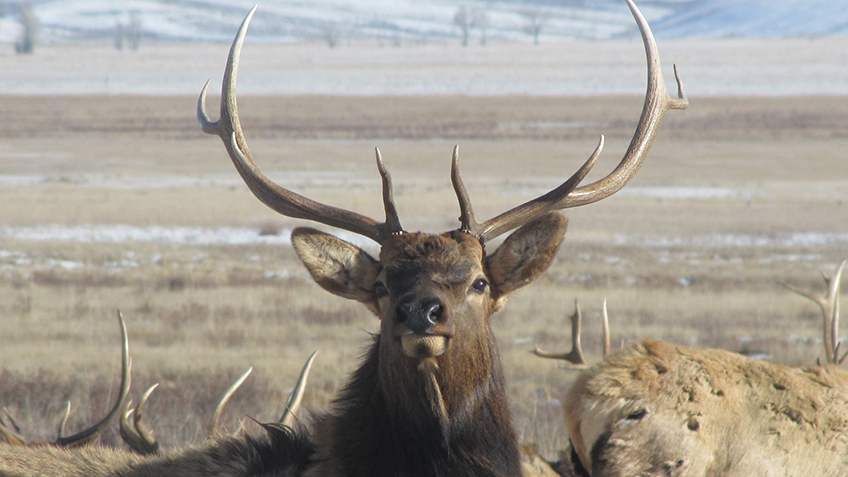 After a hard-fought battle, volunteer hunters are finally being utilized by wildlife biologists and managers to execute scientifically-drafted management plans, especially in the goal to curtail the spread of chronic wasting disease in ungulates. (Image by Lori Iverson, U.S. Fish and Wildlife Service.)

“We are trying to ensure that not only is the park herd stabilized for the future but to keep this disease in check for the surrounding population of the Black Hills,” says Schroeder, who adds that using volunteers to cull animals in a national park poses the question as to why volunteer hunters aren’t used more often. To this point, Schroeder noted the example set by Theodore Roosevelt National Park in North Dakota, which also hosts a reduction through hunter volunteers, as this website reported in 2016. He said that Olympia National Park in Washington was considering implementing a similar plan for its mountain goats.

WCNP is located in western South Dakota and sits inside the greater Black Hills National Forest. The park was the seventh one designated by President Roosevelt and was known not just by the Lakota and Cheyenne, but also by the ever-expanding settlers. On the surface, WCNP is made up of 33,851 acres of forest and prairie set aside as a wildlife sanctuary. In fact, it is home to one of the last four genetically pure strains of free-ranging bison left on the continent. The cave itself was owned at one time by the South Dakota Mining Company. When miners attempted to extract precious minerals but found none, the cave was developed for tourism. Today Wind Cave is globally recognized as having the densest and longest caves in the world with 149 miles of known passageways.

With the ever-increasing rate of CWD amongst the deer and elk population within park boundaries, authorities took action in 2009 and drafted a plan to utilize hunter volunteers as a management tool. The park’s goal is to maintain a herd between 232 to 475 elk. Due to the prevalence of CWD, the park uses volunteers to aid in culling a specified number of animals per the quotas set for each particular year. Both cows and bulls are taken with each animal tested for CWD. Volunteers are allowed to keep some of the meat from their kills if the animal tests negative for CWD. Meat not kept is donated to Feeding South Dakota, an organization aligned with Feeding America, which works to eliminate hunger nationwide. Should the animal test positive, everything is destroyed. 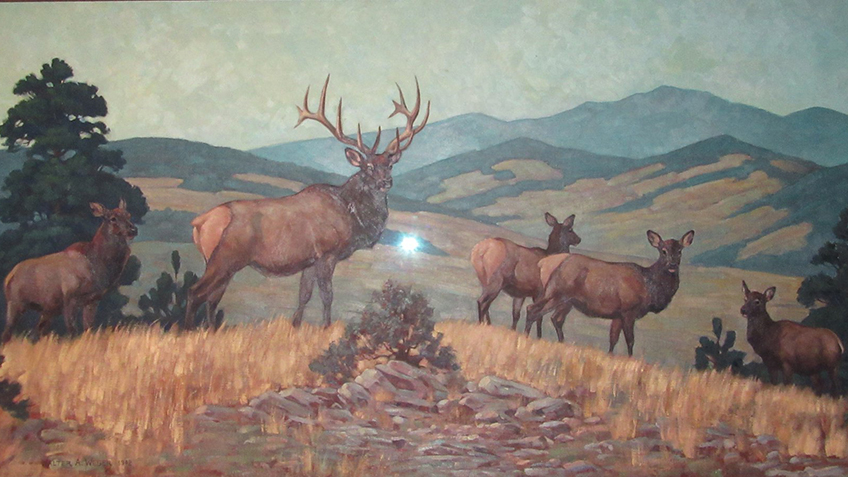 "Elk at Wind Cave Park" (1942) was painted by Walter A. Weber, a mammalogist, animal artist and illustrator for National Geographic. It can be viewed at the Wind Cave National Park Visitor Center and Headquarters.

In December 2017, the Rapid City Journal reported that “262 elk were removed from the herd. Those animals were tested for CWD, and the resulting data indicated a prevalence rate of 13.9 percent.” This year, Schroeder said the goal is to remove 20 to 40 animals. According to Wind Cave Superintendent Vidal Dávila in the official press release on the park’s website, “This study continues to provide new information on CWD prevalence that will inform wildlife managers throughout our agency and the state regarding the long-term health of the species.”

This culling operation isn’t a “walk in the park” as the physical demands are fairly intense, much like with most elk hunts throughout the West. According to the NPS website, during orientation, volunteers are required to hit targets at 200 yards three out of five times at a minimum. They also will walk 10 or more miles per day. The use of horses or other off-road power vehicles may not always be allowed. The WCNP elk culling operation is available to South Dakota residents ages 18 and older through an online application and lottery draw at gfp.sd.gov. This year, applications were accepted in early January. Interested residents can check the website later this year to see when to submit online applications for 2021.

In an age where hunting is not always viewed favorably due to the efforts and misinformation put forth by animal rights extremists, the Wind Cave elk reduction operation is a shining example of how experienced hunters can be used as volunteers. In this case, they are assisting with science-based management while helping to control a terrible disease. The move highlights the basic need for hunters, in general, to play a role in securing the health and longevity of our wildlife. 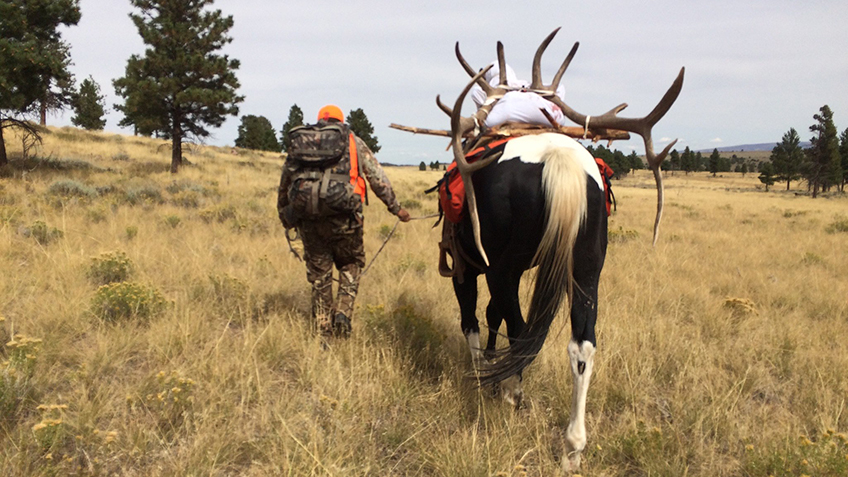 Volunteer hunters work closely with wildlife management personnel and must be physically fit because horses and other transportation such as ATV might not be used. (Image courtesy of the Bureau of Land Management.)

Editor’s Note: For background on the National Park Service’s (NPS) use of hunter volunteers, it was the NRA and Safari Club International (SCI) that were responsible for showing NPS officials the benefits of using hunters to reduce wildlife populations to scientifically-determined management levels. As explained by NRA-ILA Director of Conservation, Wildlife and Natural Resources Susan Recce, for years the NRA and SCI pressed the NPS to allow hunters to aid in culling ungulate overpopulations on NPS lands. The agency dug in its heels in favor of using contract sharpshooters and federal personnel, partly to avoid battling anti-hunters over allowing “hunting” within park boundaries. The NPS also claimed that using volunteer cullers would be illegal as well as costly to manage.

As NRAHLF.org reported in 2016, continued pressure from the NRA and SCI to use valuable citizen volunteers in culling operations led the NPS to conduct a study on the two national parks where citizen volunteers were used to assist in reducing elk populations: Rocky Mountain National Park in Colorado and Theodore Roosevelt National Park in North Dakota. The two groups’ advocacy was finally rewarded in March 2016 when the study report found that the use of hunter volunteers in culling operations on NPS units is legal, cost-effective and a great idea. From a cost standpoint alone, doesn’t it make more sense to have hunters harvest game in accordance with wildlife management goals set by biologists than to hire sharpshooters?
—Karen Mehall Phillips

About the Author: Jason Reid is an entrepreneur and writer from Upstate New York with a nomadic spirit. He has been a contributing freelance writer for more than a dozen publications and websites and has served on the board of directors for the Professional Outdoor Media Association for the past two years while helping companies grow across multiple industries. Jason has a passion for backcountry hunting, whitetails and gun dogs and for sharing the gospel of hunting with the next generation. Learning about hunting and wildlife conservation at an early age, one of his claims to fame is that he was featured in the centerfold of Field and Stream at age 14 alongside his brothers in an article promoting the youth hunting project known a “Young Bloods.”