Summer is here again, and with it the doldrums that most hunters feel as they eagerly await God’s season—the fall—and the cool brisk mornings sitting in the stand waiting for deer, stalking through fields kicking up birds or sitting in a blind calling in ducks.

Though offseason prep is extremely important, one must still find ways to keep active and outdoors during these slow months. As a result, more and more sportsmen are turning to the sport of “bowfishing” to keep their minds and their archery skills sharp during the offseason.

The NRA Hunters’ Leadership Forum recently had the opportunity to catch up with local New Jersey bowfishing guide Dominic Troisi of Full Draw Bowfishing for a night out on the mighty Delaware River to shoot invasive species and pursue this often-overlooked sport, which Troisi describes as “a blast.”

What Is Bowfishing?
It is a unique outdoor experience that melds many of the fun aspects of both hunting and fishing and offers bowhunters the opportunity for some action, particularly in the offseason. It is usually done during peak “spawning” periods when the target species are moving around the shallows. While many of these species such as snakeheads and gar are great eating, not everyone is a fan of carp, which do not always inhabit clean water, but that doesn’t mean they can’t be used. Troisi, for instance, donates them to a local wildlife refuge. These fish also make fantastic gardening fertilizer, as my own annual tomatoes would attest if they could talk.

Bowfishing is not your traditional hook-and-line fishing, but neither is it bowhunting in the traditional sense. It’s an interesting hodgepodge of the two sports that is done with a fishing license, not a hunting license. The angler uses a bow with a special rig consisting of a mounted reel with heavy line on it and a special fiberglass bowfishing arrow. The arrow is heavier than a bowhunting arrow and has a special tip with barbs designed to prevent pulls, well at least they are supposed to prevent them, and it has no fletching for stabilization as most fish are shot at 10 to 15 feet.

How Does It Work?
Fishermen traditionally move through the shallows of lakes and rivers at night, but sometimes during the day, and creep in close to fish to get a shot opportunity. Though the shot distance is not far compared to when bowhunting, the trick is the optics and ability to shoot at a moving target under the water.

“Aim low, and when you think you’re aiming low enough, aim lower than that,” says Troisi. “With how light refracts, most shots go right over them. You have to shoot at what looks like way under the fish to hit them.”

On our recent night out, we shot hundreds of times and came back to the dock with about a dozen fish. We shot four of 11 snakeheads, missed dozens of shots at carp and catfish, and pulled a few arrows after connecting.

Why Should We Chase Invasive Species?
No doubt about it, America has a growing invasive species problem. From hogs down south to the invasive northern snakehead known as the “frankenfish” so often covered by the media, there is no question that biologists and land managers nationwide have their hands full dealing with these nuisance creatures. As we know, this is fortunately where sportsmen come into play. 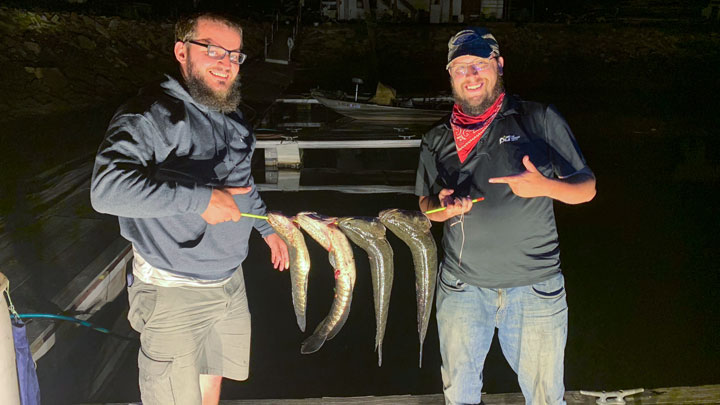 From hunting and trapping hogs across the country to hunting pythons in Florida, sportsmen are on the front lines of the fight to stop the spread of invasive species. 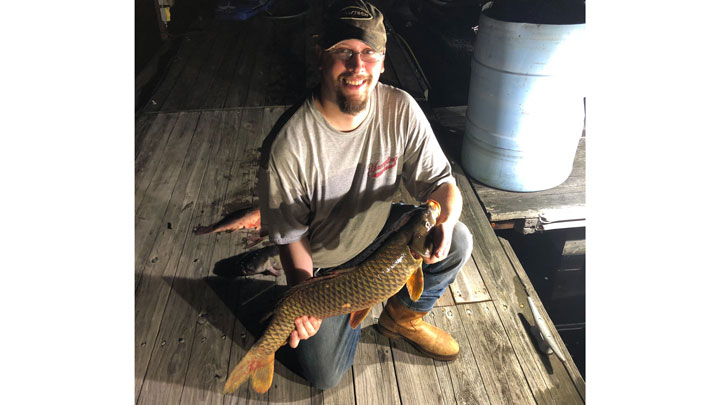 It is the same with bowfishing, a sport that focuses primarily on invasive fish species, targeting carp, catfish (such as invasive flatheads), some gar species down south and, yes, snakeheads. By looking for these fish during key spawning times, bowfishing is a key component in keeping their populations in check.

Invasive species aren’t just limited to fish such as Asian snakeheads though. Pets set loose by irresponsible owners are also establishing footholds in ecosystems around our country. Unbeknownst to many, goldfish and koi are also huge invasive species in the river. On our recent trip, we landed a black and white butterfly koi that was 24 inches long and missed several shots at large goldfish. The butterfly koi is currently with a taxidermist, described by Troisi as a “fish of a lifetime” for invasive species chasers.

Conclusion
You don’t have to wallow in boredom in the off months, especially when there is important work to be done protecting fragile aquatic ecosystems from their growing list of invaders. So, in between the honey-do list and scouting your next stand location, keep your mind and body occupied and your archery skills sharp and get out on the water this summer.

About the Author
Cody McLaughlin is a noted conservationist and conservative thought leader on public policy issues including hunting, fishing, gun rights, free-market tax and wage policy and the environment. He works as a GOP consultant for conservative political causes, managing clients’ digital communications and online presence, and as a trustee of the New Jersey Outdoor Alliance, helping to represent the state’s 1.2 million sportsmen in the political arena.