The end of a year is traditionally a time to take a look back. Here, this NRA Hunters’ Leadership Forum website takes a look back at the many achievements the U.S. Fish and Wildlife Service (USFWS) and its parent agency, the Department of the Interior (DOI), made over the course of the Trump Administration’s tenure. For the American hunter, the achievements were many and continue to be of great importance, opening up of millions of acres of public lands to access by sportsmen, contributing to wildlife conservation efforts and helping to promote our hunting heritage.

On his very first day in office in February 2017, as NRAHLF.org reported, then-DOI Secretary Ryan Zinke signed into effect Secretarial Order 3346 overturning Director’s Order No. 219—the Obama administration’s last-minute blow to sportsmen issued by outgoing U.S Fish and Wildlife Service Director Dan Ashe on Jan. 19 banning the use of all lead ammunition and fishing tackle on national wildlife refuges by 2022; and Secretarial Order 3347 advancing conservation stewardship, improving game and habitat management and increasing outdoor recreation opportunities by directing bureaus and agencies to immediately identify areas where recreation and fishing could be expanded.

Later that same year, the USFWS announced that hunting (and fishing) opportunities were opened or expanded on 10 national wildlife refuges, accounting for 132,000 acres of public lands. The new rule also opened over 60,000 acres of Refuge System lands for hunting wild game species that were not previously authorized in these areas.

This was just the beginning of important changes by the DOI and USFWS to improve sportsmen’s access and wildlife conservation on our public lands. These changes included:

In September 2017 the Migratory Bird Conservation Committee, chaired by Zinke, approved $21.9 million in grants for the USFWS and its partners to fund wetland conservation projects, with an additional $5.4 million approved to conserve 2,259 acres on six national wildlife refuges. The grants were made through the North American Wetlands Conservation Act and were matched by more than $45 million in partner funds. “I grew up hunting and fishing and know first-hand how important the outdoors is for our own health, the health of our communities and the health of our economy,” said Secretary Zinke at the time. “The projects approved by the commission will benefit hundreds of wetland and coastal bird species, other wildlife and their habitats, ensuring we have the ability to pass our shared heritage down to our kids and grandkids.”

In February 2018, NRAHLF.org provided live coverage from the Western Hunting and Conservation Expo in Salt Lake City as Zinke signed Secretarial Order No. 3362 enhancing Western big game habitat, winter ranges and migration corridors. This was a critical step in ensuring collaboration between the federal agencies under the DOI, state fish and wildlife agencies and volunteer private landowners to identify and improve these critical habitats across the Western United States. 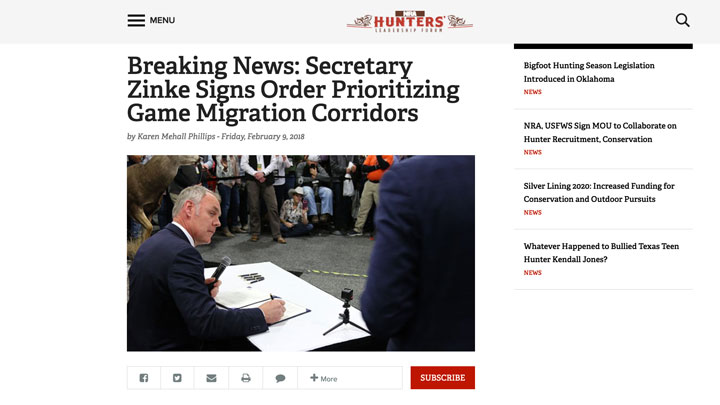 And 2019 saw the USFWS announce it had expanded hunting and fishing opportunities at 77 National Wildlife Refuges and 15 National Fish Hatcheries, accounting for 1.4 million additional acres being opened to sportsmen. “This is the largest single effort to expand hunting and fishing access in recent history,” said Zinke’s successor, DOI Secretary David Bernhardt. “President Trump has made increasing public access and streamlining government functions priorities of his administration, and this new rule delivers on both fronts given the unprecedented expansion of public acreage and removal or revision of 5,000 hunting and fishing regulations to more closely match state laws.” The remarkable move marked a major win for sportsmen across the country and for hunter-backed groups’ collective conservation efforts.

Also in 2019, as shared by NRAHLF.org, Bernhardt made it known that $1.5 million had been approved for private land habitat projects in eight Western states to improve range and migration routes for Western big-game species.

The good news continued in 2020 when the USFWS reported the historic opening and expansion of 850-plus hunting and fishing opportunities across more than 2.3 million acres at 147 national wildlife refuges and national fish hatcheries—“the single largest expansion of hunting and fishing opportunities by the USFWS in history, bringing the Trump administration’s total expansion to more than 4 million acres nationwide.”

Last but not least, to help our federal land management agencies do the work necessary to maintain these properties and continue conservation efforts, President Trump signed into law the Great American Outdoors Act in August 2020. The Act provides $9.5 billion in federal funding over the next five years to address the crumbling infrastructure on America's public lands and waters. As reported by NRAHLF.org, within that funding package, the National Park Service will receive $6.5 billion with an additional $3 billion being set aside for the repair and maintenance of public land infrastructures managed by the USFWS, Bureau of Land Management (BLM) and U.S. Forest Service (USFS), which continue to provide recreational opportunities for America's sportsmen and women. These opportunities include access to public hunting, fishing, and recreational shooting on millions of acres of federally managed lands.

These achievements will be remembered by the hunting and conservation community as among the Trump Administration’s most significant actions to preserve American wildlife conservation and our hunting heritage for decades to come.