When my headlights illuminated the driveway at my future in-laws’ home, my then-girlfriend, Becca, fled the front door and hopped into my car. We weren’t heading for a restaurant or the movie theater. No, we were going turkey hunting.

Becca had never carried a firearm afield with the intent of killing an animal. Thus, her eyes were filled with innocence and genuine excitement as we approached our hunting location. This was completely new to her.

That morning we saw 13 toms, multiple jakes and 30-some hens. However, none came within 200 yards.

When afternoon arrived, it was time to get aggressive. I crawled out of the blind, plucked my strutting-jake decoy from the spread, then crawled back to the blind. I instructed Becca to follow closely behind me with the plastic strutter being our only cover. (Note: This was safe to do because I was aware of our surroundings, and we were hunting on private land during a special youth/women turkey hunt. No one else was hunting on the property.)

When we encroached the gobbler’s comfort zone and challenged him, he turned and marched our way in full strut. At 30 yards away and still coming, I instructed Becca to shoot. The muzzle erupted, and a swarm of No. 5 shot rocked Mr. Tom’s world. Hugs, high fives and ear-to-ear grins followed.

Becca became a hunter that day. And a couple of weeks later, I cooked my favorite wild-turkey recipe for her family—with her bird.

A deer was next on her to-hunt list. Before we get into that, though, let’s review some points I addressed with her prior to taking her on her first hunt.

1. Hunting is a Bloodsport

While killing a game animal is a part of the hunting experience, teach new hunters and non-hunters alike that it is not the sole motivation. Share the other important aspects of hunting—providing meat for the table, ensuring wildlife conservation and management, enjoying the solitude and challenge, etc. While being successful ultimately means bloodshed and killing an animal, explain that hunters hone their shooting skills to ensure a quick and humane kill. Once the person you seek to mentor understands that killing is part of hunting, then it’s safe to proceed.

Discuss the many benefits of hunting your own food, which means partaking in the planet’s purest, most unadulterated meat—something untrue of most commercial meats.

Of course, hunting also means that you personally handle the meat from field to freezer. Explain that from there, meat can be processed at home or at the butcher shop. There is great reward in providing your own meat via hunting and knowing how and by whom it was handled before it lands on your dinner plate.

3. Hunting Puts You in Solitude

In today’s fast-paced, high-tech world, it is often tough to find a place where you can unplug from the daily grind. The woods are that rare place. Share with new hunters how viewing non-game species or watching the sun rise are simple things we otherwise might fail to notice in our day-to-day routine. Who doesn’t love to unwind and enjoy the simple things? 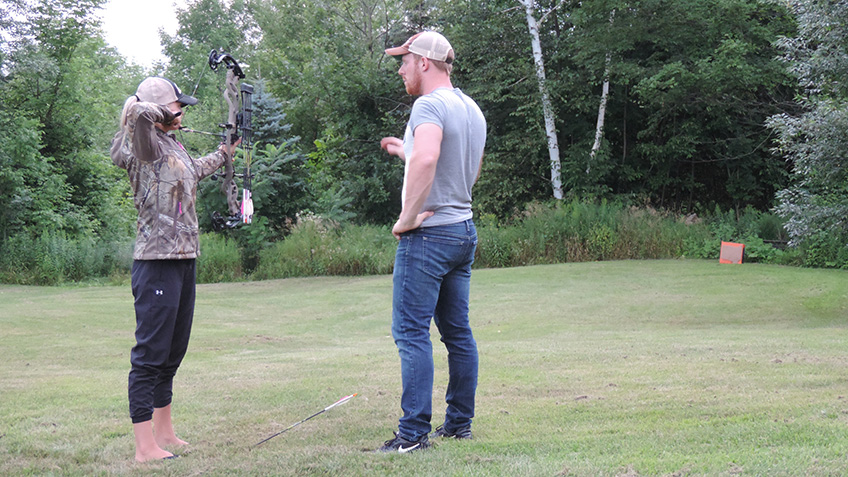 McDougal spent hours coaching his wife and helping her develop proficiency with her bow before taking her to Kansas where she killed her first deer.

Wounding an animal creates a negative experience, making shooting practice an important part of our hunt preparation. I don’t take a beginner hunting without first spending extensive time teaching how to safely handle, fire and carry their hunting firearm. As America’s leader in firearms and hunter safety training, the NRA offers a variety of programs and services to promote the safe handling, use and storage of firearms. Review the NRA’s fundamental rules of firearm safety.

After lots of shooting practice, I then help a new student to determine his or her maximum effective range. Without any previous hunting experience, he or she does not yet understand the many uncontrollable factors that affect the outcome of every shot fired in a hunting situation.

As mentors, we do extensive behind-the-scenes legwork to give our first-time hunter the best possible chance to harvest an animal. Thus, they might get the impression that hunting is easy. If they’re to continue hunting on their own once we’ve shown them the ropes, they must understand that hunting is challenging and you sometimes go home empty-handed. Orchestrating a shot opportunity can be difficult, and once an animal is down the real work of field-dressing and processing the meat begins.

Now Back to Becca

Becca’s father purchased her a bow so I could take her deer hunting during the fall following her first turkey hunt. We spent extensive time developing her archery proficiency. Once I felt she was ready, we positioned two stands together on public land near her home so I could sit with her.

One afternoon a 3-point buck appeared and presented her with multiple shot opportunities. I told her to shoot if she liked—her choice. She didn’t feel right taking a buck that was not yet mature, and I respected that. Later that fall during the firearms season, she narrowly missed an opportunity to pull the trigger on a large 10-pointer. Unfortunately, he left as quickly as he appeared and no shot was fired. While hunting together the following bow season, I used a grunt call to draw a public-land 8-pointer into bow range, but he caught our wind as he circled us to investigate.

I married Becca in 2013, and she took a few years off from deer and turkey hunting. I encouraged her to go, but I didn’t push her. Then in the spring of 2016, she was ready to take up turkey hunting again and nailed a gobbler with her bow. She arrowed another big tom the following spring. 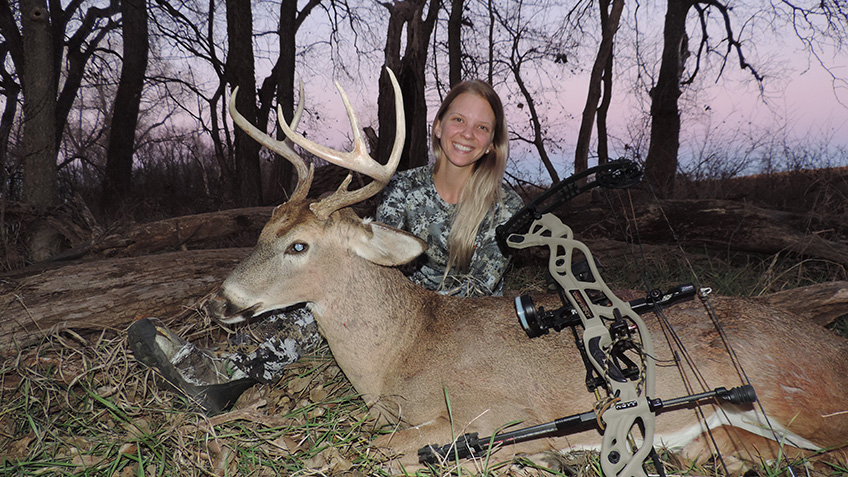 After the inevitable emotions of taking a deer subsided, Becca McDougal is all smiles behind her first deer ever, a fine Kansas 7-pointer.

During this time, I offered her the opportunity to take my place on an outfitted Kansas deer hunt that I’d won through a contest. She thought about it for a few months, and when the application deadline approached, she accepted my offer.

We hunted nearly 45 hours before Becca finally got a shot opportunity on a fine 7-pointer an hour before dark on the final afternoon of our hunt. The buck offered a broadside 20-yard shot. With minimal coaching, Becca performed just as she had practiced. She held her composure, took her time and made a great shot. The buck collapsed at about 100 yards.

I then witnessed the raw emotion of a hunter taking her first deer. Tears welled in Becca’s eyes as she thanked the buck for his life and the meat. She also thanked God for helping her to make the shot. Becca’s reactions brought me back to when I took my first buck.

Mentoring beginners is a movement that will save hunting from becoming a lost art amidst modern times and technology. The question is, will you, too, help someone to get his or her first fur?