On June 8, the Maine Department of Inland Fisheries and Wildlife (MDIFW) held its annual moose lottery event at Cabela’s in Scarborough, Maine. Later that day, the Portland Press Herald reported that the ranks of female hunters in Maine continue to rise and that those female hunters appear to be migrating toward moose hunting. In 2010 the number of licensed female hunters was 17,078 or 9.6 percent of the Maine hunting population. Their numbers have increased every year since. In 2017—the most recent year for which the MDIFW has data—women hunters numbered 21,178 or 13.3 percent of the hunting population.

A total of 2,820 moose hunting permits were issued for 2019. Of those, 50 went into a separate lottery for Maine Registered Guides. Of the 2,770 remaining, 2,546 went to Mainers, while 224 went to nonresident hunters. (Interestingly, nonresident hunting is bolstering hunting numbers in many states.) The moose lottery costs $15 to enter and over 52,000 applicants put their name in the hat this year. Once drawn, a resident moose permit costs $52 and a nonresident permit is $585.

The Press Herald article noted that although the moose lottery is a male-dominated event, plenty of women heard their names called and celebrated with arms skyward. Hunter gender is not tracked for Maine moose permits, however, by rough count and by keeping unisex names in the male column, approximately 460 female names were drawn. This ballpark figure represents approximately 16.6 percent of the moose permits, which is 3.3 percent higher than the female hunting population. Lady Luck favored the ladies this day.

One woman interviewed for the Press Herald story cited the confidence she garnered from hunting. She predicted that more female hunters in Maine will try moose hunting. In another instance, a registered Maine guide revealed that he’s guiding more female hunters and that it’s only a matter of time before they try moose hunting. He pointed to the time commitment involved with moose hunting and the challenge in hauling one’s harvest out of the woods as being a potential hurdle for some women. Many of his female clients appreciate being able to turkey hunt, for example, before or after work and being able to easily carry out and process their bird. 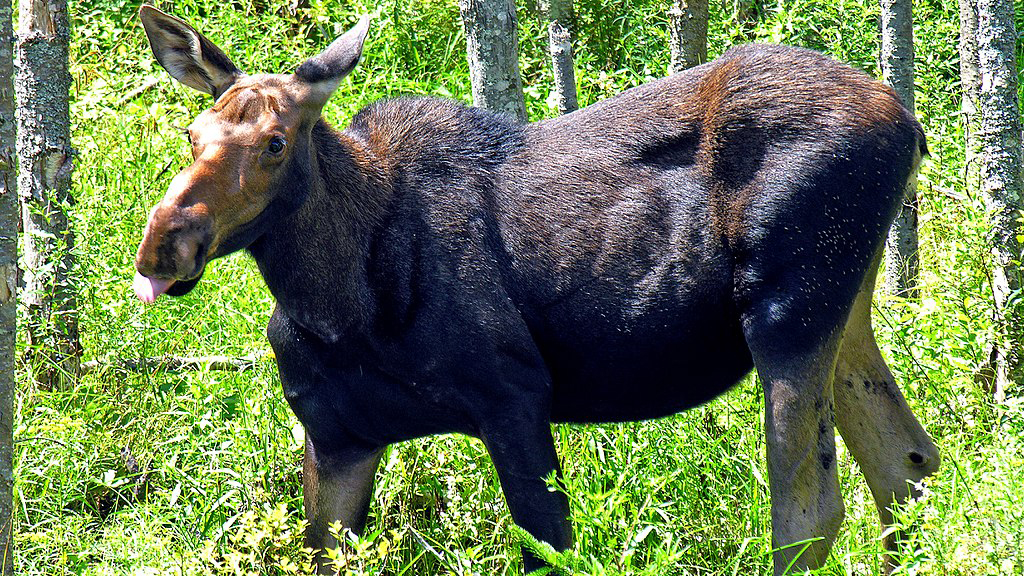 This moose was browsing along the side of a road in New Hampshire. (Image by Dennis Jarvis of Halifax, Canada.)

One lottery winner’s fiancé interviewed for the article said that a lot of his future bride’s friends are curious about hunting. The couple has taken them on rides to look for moose. Another woman was tired of being the proverbial “hunter’s widow” so she picked up the sport to spend more time with her husband. She loves being outdoors, took her first deer last fall and hoped to hear her name called at the lottery.

All of this interest may be coming at an opportune time. The report mentioned that the total 2,820 moose permits issued in 2019 represented an 11 percent increase over last year’s 2,523. This increase followed four years of curtailing the hunt by close to 50 percent in order to save calves that were being bled to death by ticks that survive late-onset winters. That approach turned out to be the exact opposite of what was needed to manage the herd back to health, as NRAHLF.org reported. The moose population has exceeded the carrying capacity of its range, meaning too many moose are depleting the browse line. Calves especially cannot get enough to eat and in their weakened state became susceptible to parasitic moose ticks. In addition, the ticks also affect the reproductive rate of adults.

Late-starting winters are a contributing factor to the situation because without early snow cover, the ticks survive and hitch rides on the calves. Wildlife managers, however, cannot control the weather. What they can control is the number of moose per square mile. Knowing that number, they knew they needed to increase hunting to cull the herd to return it to a healthy level.

As this website covered in April, Maine’s deer harvest for the prior season was one for the record books. Six months earlier, the state had hired a new recruitment, retention and reactivation coordinator. Katie Yates was so successful in implementing an R3 program for 2019 in Maine that she received the MDIFW’s employee of the year award. Are those efforts contributing to the increase in female hunting numbers? “I think it’s still too soon to tell what long-term impact these efforts have on hunter numbers,” Yates cautioned.