Save Your Seat! Tickets Selling Out for the NRA Hunters’ Dinner and Auction in Houston

With only 10 days until the NRA Hunters’ Leadership Forum (HLF) Dinner and Auction in Houston on May 26, get your tickets now to attend this premier event celebrating hunting and honoring Don Trump Jr. for his accomplishments in the hunting and wildlife conservation arena. That alone packs a room, but there’s more. The keynote speaker is Eric Trump, and for one more dangling carrot: The NRA HLF is honoring late renowned wildlife artist John Seerey-Lester as one of his originals is auctioned to raise money for the NRA’s critical hunting initiatives. 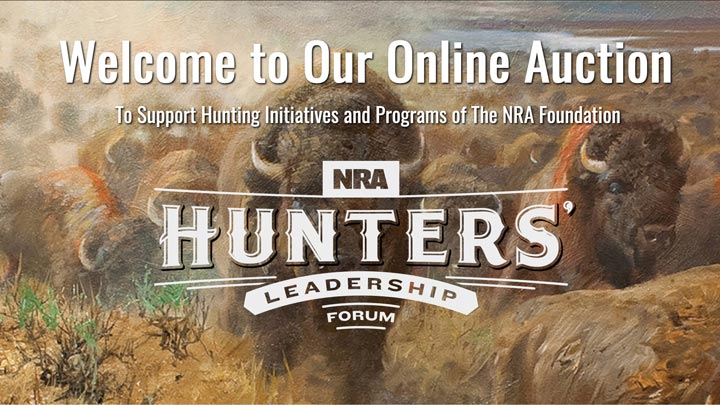 Those who can’t attend the NRA HLF Dinner and Auction at the Rice Hotel Crystal Ballroom from 6-9 p.m. that evening can check out the auction online supporting The NRA Foundation and the hunting programs it funds into the future. From worldwide hunts to firearms and ammunition to wildlife art and NRA Whittington Center shooting sports adventures, there is something for every hunter.

Of course, while “adventure of a lifetime” is defined by the beholder, anything regarding Alaska conjures universal dreams. Those who yearn to hunt the Last Frontier State or want to turn the trip into a destination for the entire family will want to keep an eye on Item No. 119—Worldwide Trophy Adventures’ Alaska Bear Hunt for four hunters and four non-hunters in 2023 aboard the luxurious Golden Eagle yacht. While Alaska’s southeast region holds some of the state’s largest black bears, enjoying your evenings in one of four private staterooms seals any deal. If hunts across America, Africa or New Zealand pique your interest, click here. For more details on an auction item, contact Peter Churchbourne, director of the NRA HLF, at [email protected]; 703-203-9552. To purchase dinner tickets, contact Laura Evans at [email protected]; 703-267-1126. 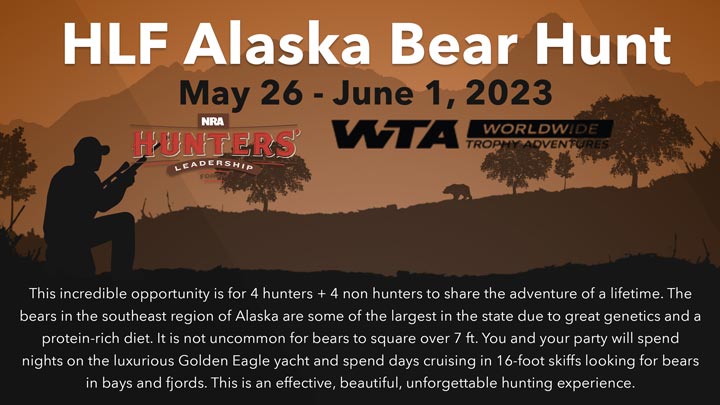 Pounding the Point Home
All auction items were donated to support the NRA’s critical work for hunters, which entails promoting cultural acceptance of legal, regulated hunting and all it ensures. For those who are not aware, in 2016, after launching this national award-winning NRAHLF.org hunting issues-based website, it was the NRA—backed by nearly $500 million in HLF funding—that hired the international public-opinion-and-attitude survey research firm Responsive Management to begin groundbreaking research assessing public attitudes toward hunters, hunting, animal rights and animal welfare. Efforts included working with hunter-backed partner groups including the Dallas Safari Club, Safari Club International and Rocky Mountain Elk Foundation to share the results and begin launching coordinated communications strategies to counter the misinformation put forth by animal rights extremists. In 2021, the NRA’s investment led to the launch of the NRA HLF book, “How to Talk about Hunting: Research-Based Communications Strategies.” In delivering a blueprint for communicating and debating about hunting deliberately and thoughtfully, the book features talking points and key takeaways that teach hunters and hunting and wildlife conservation professionals to be tactical, practical thinkers and communicators. “How to Talk about Hunting” workshops followed by virtual interactive sessions during the pandemic continued teaching pro-hunting audiences to use winning debate tactics to communicate hunting’s benefits and build long-term support.

All the above does not even cover the fact it was the NRA that launched the nation’s first-ever hunter safety course in 1949 and invested $3 million to create the comprehensive free NRA Online Hunter Education Course now used by multiple state wildlife agencies. Since 2019, the U.S. Fish and Wildlife Service permits these agencies to claim a dollar value of the course as in-kind match dollars to access federal Pittman-Robertson (P-R) grant funds, marking a win for both hunters and state agencies.

For more background, decades-old NRA hunting programs such as the NRA Youth Hunter Education Challenge—the nation’s most comprehensive hands-on education and training event for hunters up to age 18 launched in 1985—work to build young hunters’ skills and keep them safe afield. In supporting the national Hunters for the Hungry (HFH) movement, the NRA HFH Information Clearinghouse connects hunters with local HFH programs while the NRA HLF supports HFH affiliates through grant funding. Last but never least, where would hunters be without the NRA Institute for Legislative Action (NRA-ILA) fighting for hunting and the Second Amendment 24/7, often quietly behind the scenes?

Any one of these accomplishments should draw hunters’ unwavering NRA support. All of them combined is a testament to the fact the NRA has been leading the charge for hunters since 1871. A 151-year anniversary is yet another milestone to celebrate. Cheers to America’s oldest civil rights organization and cheers to its efforts to keep the importance of hunting and wildlife conservation foremost in the hearts and minds of mainstream Americans.

Circling back to the NRA HLF Dinner and Auction, sponsored by Worldwide Trophy Adventures and Woods and Waters Taxidermy, can you imagine owning a Seerey-Lester original? John’s widow, Suzie, a noted wildlife artist in her own right, is also donating one of her original paintings to the cause. From the auction to having the opportunity to spend time with the Trump brothers and bond over the quest for our next outdoor adventure, this event is one that no hunter wants to miss.

Don’t be late to the hunting party. Save your seat at the table today!